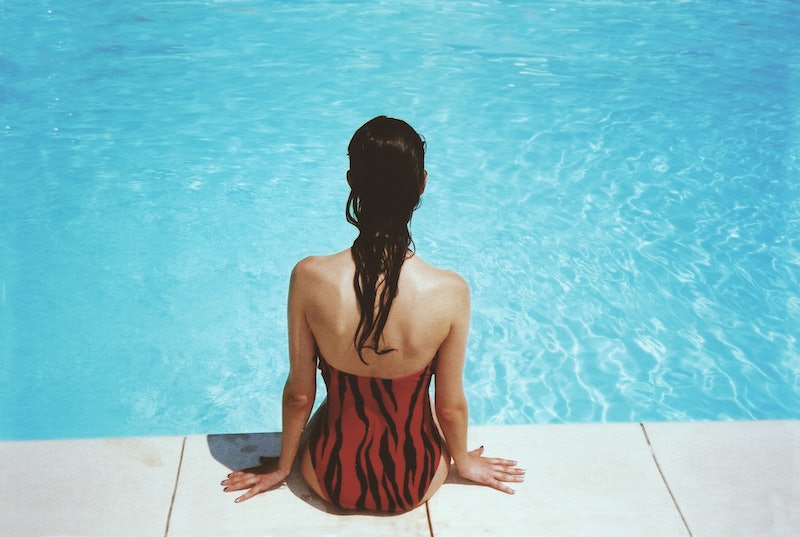 We see cases of women and girls criticized for their clothing choices all too often, but this one seems especially ridiculous: This week, a woman in Tennessee was shamed for wearing a one-piece bathing suit at the pool in her apartment complex. A manager asked her to cover up or leave because her scandalous one-piece swimwear might “excite” teenage boys. Ugh.

On Tuesday, Knoxville, Tennessee, resident Tyler Newman posted an account on Facebook of an encounter between his fiancée, Tori Jenkins, and a leasing consultant at their apartment complex. Newman claims that, while hanging out at the pool with friends, Jenkins, wearing a pink swimsuit, was “faced with either changing her bathing suit, covering up with shorts, or leaving the pool that we paid a $300 fee to maintain.”

“Tori was accused of wearing a ‘thong bathing suit’ and told there were complaints about the way she was dressed after roughly 3 minutes tops,” Newman wrote. (As you can see in the photos below, the bathing suit was absolutely not a thong.)

Newman claimed that Jenkins went to the complex’s leasing office to discuss the matter with the complex’s staff. “In the office, the leasing consultant (who, for now, I will not name) insisted upon letting Tori take her picture to show ‘how inappropriate’ her bathing suit was, and instructed her to look into a mirror at her own body,” Newman alleged. Can we take a moment to ponder the WTF-ness of an apartment manager demanding to take photos of a tenant in a bathing suit? SO inappropriate.

“She was told that the leasing consultant wouldn't want her own kids around Tori,” Newman claimed. He alleged that the consultant then threw in some good, old-fashioned body shaming, writing, “[Tori] was told that her body, because it's built more curvy than others is ‘too inappropriate’ for children to be around. She was told ‘there are a lot of teenage boys in this complex, and you don't need to excite them.’”

So. Messed. Up. Women and girls are not responsible for making sure that boys don’t get riled up.

For Newman, the experience was eye-opening. He wrote,

Today my fiancée was told that she is less important than how men feel around her. That Tori is less important than a man's urges to be sexual towards her. I think she's the most beautiful woman in the world, but I also respect her. I would never make her or any other woman feel less than what she's worth because of her outfit or her looks. This is how rape culture continues to grow.

In a follow-up post, Jenkins responded to both the support and criticism she’s gotten from people on social media. Unfortunately, the images of her in the bathing suit that Newman posted led some people to write rude comments. Some of it was so bad that she removed a photo of herself facing toward the front. “I took it down after reading so many hateful comments about my stomach and so many intensely explicit sexual comments,” she wrote. “That is the whole issue.” She added, “The ENTIRE POINT of this post is that no man or woman has the right to make me feel uncomfortable in my own skin. No right to police me or any other human.” Thankfully, not everyone has taken the incident as a further opportunity to body shame. Hundreds of people have left positive messages of support. “I'm really amazed by all of the overwhelming support I've received,” Jenkins wrote.