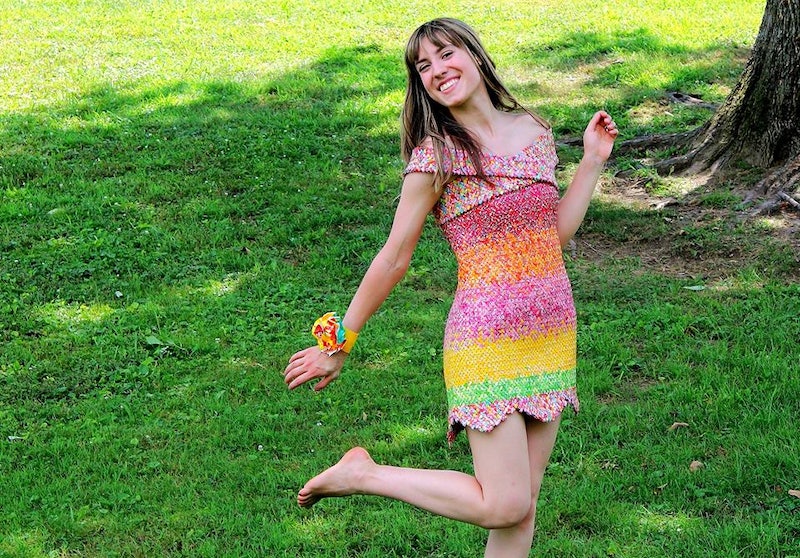 There have been pizza-inspired dresses and toilet paper gowns, but I can guarantee you've never seen anything quite like this. As Teen Vogue reported, Emily Seilhamer made a dress out of Starburst wrappers, and it's actually pretty wearable. The quirky cocktail attire took her five years and 10,000 chewy candies to make. This isn't the only unconventional item that she's turned into wearable art, either. There's even a pair of Starburst shoes to match.

At first glance, you would think that this is just your typical off-the-shoulder, multi-colored dress. Heck, even when you look closer it's hard to tell that this isn't fabric. But when you finally see the details, you won't be able to stop staring. Seilhemer posted a picture of her Starburst wrapper dress on Facebook, and it didn't take long for people to become obsessed with the design.

The gown, which is made up of over 800 packs of Starbursts, has a zipper in the back and even has it's own matching shoes. But it's a lot more than just an outfit — the reason behind the Starburst wrapper dress is actually pretty romantic.

"I met my husband after he offered me a pack of starburst," Seilhamer tells Bustle via email. "As his favorite candy he kept giving me packs so I asked him to start saving them. He would bring me grocery bags full! Also the colors are wonderful to work with. So bright and cheery."

According to Seilhamer, the dress took her so long to complete, because it was so intricate. She posted pictures of the entire process on her Facebook page. "The saving and folding definitely took the longer [sic]. Each wrapper needed [to be] ironed and then folded 6 times before linking them together into a chain," Seilhamer says. "I would bags of them in my purse to fold while I was waiting in line at the grocery store or studying for college exams!"

She's actually worn the dress out in public a few times as well, so it's just as wearable as it looks. This isn't the only item she's made out of unconventional materials. Since creating the Starburst dress, she's also made a dress out of neckties and her grandmother's old wallpaper as well.

If you're obsessed with this dress, then I have some good news for you — Seilhamer has a plans to create one major unconventional outfit out of a different item every year, so there's plenty more to come. I can't wait to see what she does next!