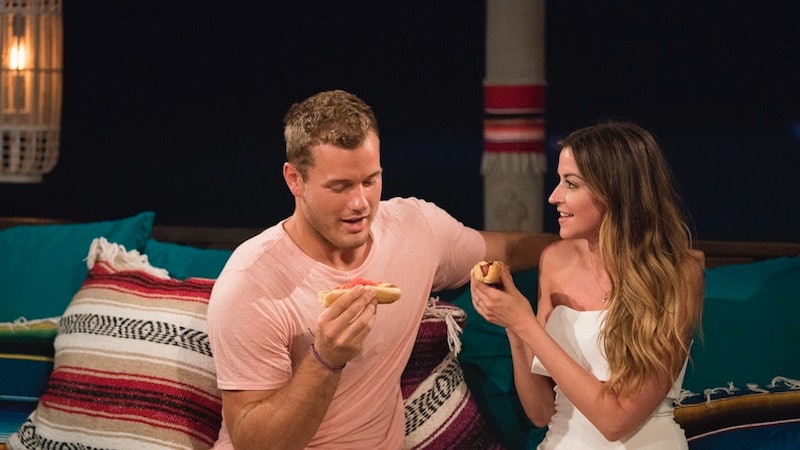 It wasn't always smooth sailing when it came to Colton Underwood and Tia Booth's relationship. Their romantic history proved to be an obstacle during Becca's Bachelorette season, where Colton was a contestant, and then again on Season 5 of Bachelor in Paradise. In the end, they decided to part ways; however, Tia and Colton's recent Twitter exchange proves that these exes are in a much better place these days and bear no ill will toward one another, despite all of the heartache and tears that were once shed.

After reuniting on Paradise last year, Colton and Tia decided to give their relationship another shot and spent a significant amount of time together down in Mexico. In the end, though, Colton realized that he wasn't in the right mindset to take things with Tia any further. He was only continuing the relationship in order to make Tia happy, but it wasn't what he wanted, even though he thought she was an amazing person. She deserved more than what he was able to give, so he left. Understandably, Tia was heartbroken over the whole thing and broke down in tears during his departure, but she appreciated his honesty and knew that he needed time to work through some stuff before being able to commit to anyone.

Now, after a year apart, Colton and Tia are happier than they've ever been and still maintain a solid friendship full of love and support.

"I bawled like a baby and ran off when I thought @colton was going on a date with someone else," Tia tweeted during Tuesday night's episode of Bachelor in Paradise. "It makes no sense but it happens ok?" This is most likely in reference to how upset Katie Morton became during the episode when Chris Bukowski agreed to go on a date with Jen Saviano in Paradise.

Katie told Chris earlier in the episode that if he wanted to go on a date with someone else, then that's what he should do. He took her comment to heart and started questioning the seriousness of their relationship. He knows that he really likes her, but now isn't sure if she feels the same way about him. It didn't take long for Katie to regret what she said, knowing that she was just putting up a wall to prevent herself from getting hurt. (The classic self-sabotage. We've all been there.)

Tia's tweet indicated that she completely understands how emotional things on Paradise can get and sometimes it just warrants a good cry, even if it seems silly to viewers. Colton responded to Tia's remark shortly thereafter, indicating that he still has her back, even if they're no longer a couple. "Happens to the best of us.... now look at where we are!" he tweeted. "Hope all is well :)"

Indeed, they are both currently in serious relationships. Colton is still happily dating Cassie Randolph, a contestant from his season of The Bachelor, while Tia is with Cory Cooper, the Executive Vice President at his family’s steel company, Cooper Steel. The two of them have been happily dating since last November and are still going strong to this day.

Needless to say, these two are living their best lives — and even though they are doing it separately, it's nice to see that they can still support one another and look back on their time together as being worth it in the end.