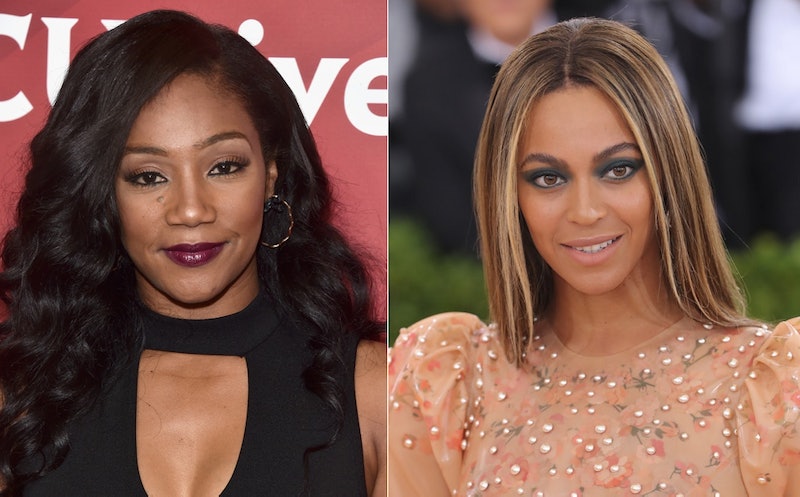 Coming Summer 2018: the story behind Tiffany Haddish and Beyoncé's selfie with the stars playing themselves. OK, not really, but it's a movie most everyone will want and need in their lives. In an interview published Wednesday by Vulture, Haddish revealed how she scored that epic selfie with Queen Bey that the Girls Trip (writer: Erica Rivinoja) star posted on Instagram in December 2017. Those who know anything about Haddish, already know the way she told the story is hilarious.

"Okay, so what had happened was, something had went down with somebody at the party, right? I’m not at liberty to say what had went down at the party, but Beyoncé was just telling me to have a good time, and I was like, 'No, I’m gonna end up fighting this b*tch!' She was like, 'No, have fun, Tiffany,' and I said, 'I’m only going to have fun if you take a selfie with me.'"

Do you need tissues to wipe up all those tears? How amazing is this, though? Basically, the comedian conned Beyoncé into taking the photo. Plus, Bey apparently stopped Haddish from getting into a fight. This has to be the best selfie story ever, especially when it comes to taking one with the Lemonade artist.

To make it all the better, Vulture reporter Kyle Buchanan, who interviewed Haddish, tweeted Wednesday, "I had to cut the interview down but Tiffany also referred to the wig as her hard hat." Stop. It. Haddish really knows how to tell a story.

The selfie in question (below) was taken at one of JAY-Z's concerts last December in Los Angeles. Haddish shared it on Instagram and, of course, gave it a hilarious caption. "@beyonce was telling me that my wig was slipping.... [crying laughing emoji] But for real she told me to have fun and I DID! #SHEREADY #thelastblackunicorn #beyonce".

Haddish also posted a selfie with JAY-Z, which she captioned: "Jay-Z after I told him Jaleel white is the only black man I know of to have his own Breakfast Cereal. [grimacing emoji] ..... But for real I had fun #jayz show last night was everything! #thelastblackunicorn #SHEREADY #jayz".

Now that the story is out of how Haddish accomplished getting a photo with the queen herself, fans are living for it. There are a lot of reactions on Twitter. Check it out.

This speaks for pretty much everyone.

There Needs To Be A Movie

It's A Laugh Out Loud Story

Can't you just hear her?

Hey, Kyle Buchanan, can you release the audio?

Give Her All The Awards

Just go ahead and add amazing storyteller to her resume.

This Is Everyone's Dream

Something to live up to, for sure.

Ever since she started making headlines for her performance in Girls Trip, Haddish has been seen as pure gold. She continues to prove to be a national treasure. She's lovable. She's relatable. She uses Groupon. She takes selfies with Beyoncé. What's not to love? Tiffany, keep on being you and please continue telling stories that make people laugh so hard they can't stop.