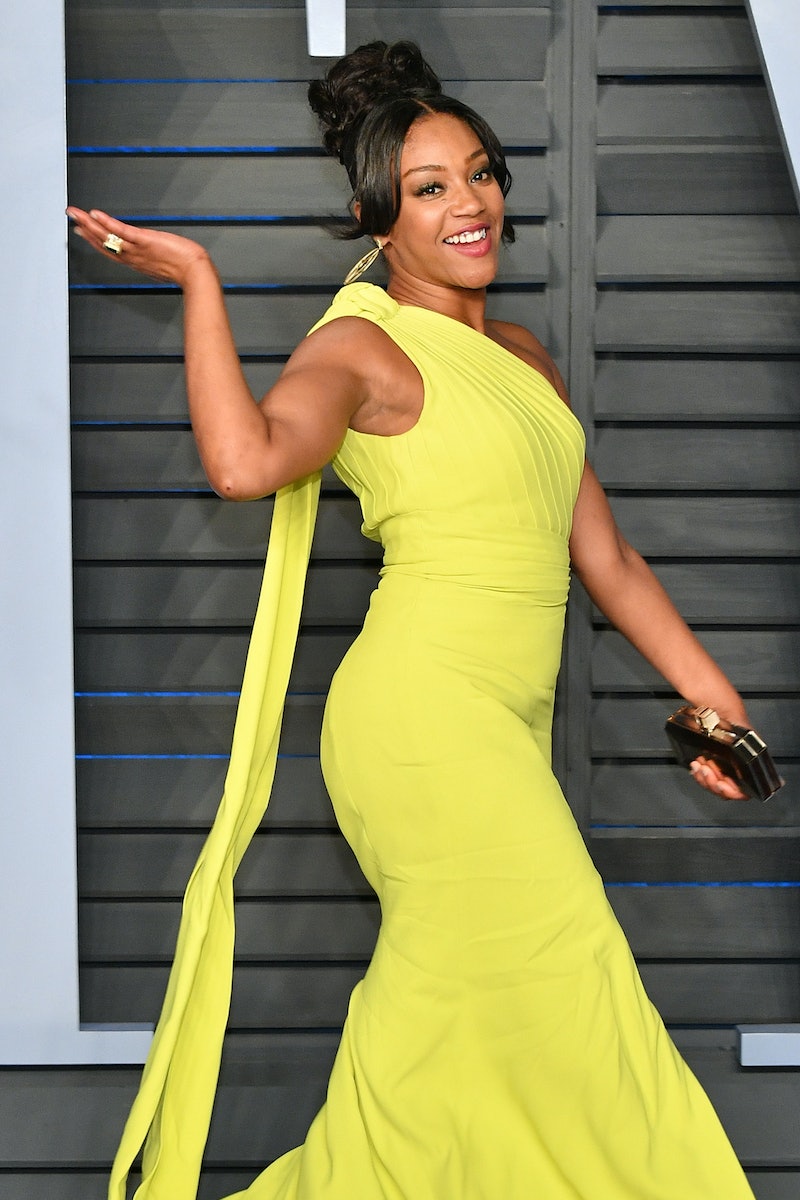 It may not seem like celebrities would have any trouble getting dates, but apparently even superstars sometimes need wingmen at their sides. At Seth and Lauren Rogen's sixth annual Hilarity for Charity Variety Show in Los Angeles, Tiffany Haddish told the wildest story about Drake's dad flirting with her at Beyonce and Jay-Z's Oscars after party. Viewers can watch Haddish retell the story when the Hilarity special hits Netflix on April 6, but this one is so good, it's honestly worth being spoiled.

Although Haddish signed an NDA at the party, there was something the actor experienced that she was luckily able to bring to the outside world. "So I met Drake, and Drake was like, 'I want you to be in my music video,' and I was like, 'Oh my god, I always wanted to be in a video,'" Haddish recalled at the Variety Show, an event meant to raise Alzheimer’s awareness. At the party, she continued, Drake introduced her to his dad, and things got a bit, uh, interesting from there.

"I'm talking to Drake's dad, right! Meeting Drake's dad was like 1987, he looked like Inspector Gadget, with that big mustache so like he might have a van, offering candy to people he shouldn't be offering to," Haddish joked. "He says, 'Do you have any kids?' And I said, 'No, sir, I don't have any kids.' He's like, 'Plan on having some?' I said, 'It's not really in my life plan... in two, three years maybe. But right now, it's not in my plan.' He said, 'OK, that's cool. But if you need any help tonight... or anytime in the next two to three years, I'm available for you.' I was like, 'Wow... One second, sir.'"

At that point, Haddish apparently called Drake over to immediately discuss what just happened. "'Drake, can I speak to you?! Excuse me, French Montana,'" she said. "Look here, I would much rather be your baby mama than your step mama.'" And apparently, this was nothing new for the rapper to hear.

"He's like, 'Oh, my dad's doing it again?!'" Haddish recalled. "I told the same story at a comedy show a few days after that and these girls come up to me after the show and go, 'Oh god, you met Drake's dad? He's so hot, he's so fun to party with.' And I was like, 'Oh my god, did I get the wrong number?'"

In the end, it all seemed to work out. "Drake thought it was funny too, 'cause I saw him and he was like, 'No you got my number, that's the right number,'" Haddish said. "And I was like, 'Well when you taking me out to dinner? 'Cause I'm hungry.'"

Meeting Drake and his dad might've been the highlight of Beyonce and Jay-Z's party for Haddish, but the whole night was one to remember. The comedian's invite to the party — her "I made it, b*tch!" moment, as she called it — came right after Beyonce released the song "Top Off." "In the track, the singer says, 'If you wanna party with the queen you gotta sign a non-disclosure, Tiffany.' And for Haddish, hearing that lyric was a sign. "I was like, 'I made it! I made it. I'm in a Beyonce song,'" she recalled at the show.

At the time of the song's release, fans speculated that "Top Off" was about Haddish, because they could hear "Tiffany" in the background after the NDA line. (A few weeks prior, as we all know now, Haddish met Beyonce for the first time and watched Bey shut down another actor who was touching Jay-Z's chest.) Possibly being mentioned in a Beyonce song was a major moment for Haddish, understandably. "Forgot all the little awards I won or being in a movie that made over $100 million. She wanna hang out with me, I just gotta sign some paperwork," she recalled. And so, at the Oscars party, the actor felt like she was on a mission to sign that NDA.

"I go to the party, as soon as I get there... I walk immediately up to the DJ and I'm like, 'I got business to take care of... Tiffany Haddish is in the building and I'm ready to sign that NDA. I'm ready to party,'" she said at the Variety Show. At that point, Haddish recalled, the DJ made an announcement to Beyonce, letting her know Haddish was ready and willing to sign that NDA and get her party on. "I dropped down to the middle of the floor, I do the nay nay for the 30 seconds, and that's all I'll say about the party," she said.

Haddish had an undeniably epic night at the Academy Awards, presenting on stage, encountering Meryl Steep, and having that run-in with Drake's dad at the after-party. It's unknown if Drake or his dad ended up taking her out for dinner, but at the very least, the comedian got a hilarious story out of the situation.