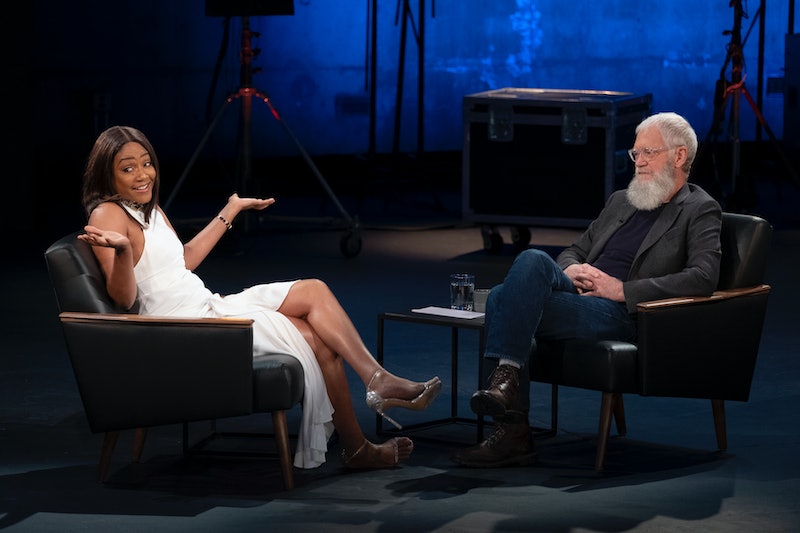 Bunk beds may seem like no big deal to many people, but Tiffany Haddish's interview on My Next Guest Needs No Introduction shows that childhood experiences can turn something as innocuous as a place to sleep into something worth being fearful of. An episode from the new season of David Letterman's interview show included a deep chat about her upbringing, her success, and everything in between. Including her relationship with bunk beds.

Haddish's feeling on the tiered mattress frames had soured by the time she started trying to find work as an actress in Los Angeles and joined the Church of Scientology (mainly for a place to crash, she says). Haddish tells David Letterman in the interview that when she was brought to the barracks that she was expected to sleep in, Haddish loudly proclaimed that she did not "do" bunk beds and wouldn't be able to sleep in the ones they had there. Haddish explained to Letterman that her feelings towards the sleeping arrangement in these barracks stemmed from experiences she had at MacLarren Hall, a former center for kids in foster care while they awaited placement in Los Angeles.

Haddish explains that she would find herself trapped in bunk beds at MacLarren Hall that had been placed up against the wall, making it easy for other people trying to harm or intimidate her to block any possible exits from the bed.

Haddish disdain for bunk beds is so powerful that it even stumped Scientology. Haddish tells Letterman that at one point she was being tested through a Scientology E-meter, meant to measure emotional reactions to memories with the purpose of removing emotion from memories. Haddish was instructed to tell an emotionally affecting story again and again until the story became so rote that the E-meter measured that the story had little to no emotional impact on her. However, L. Rob Hubbard clearly did not anticipate someone like Haddish coming along, as she claims that no matter how many times she told her story about experiences with bunk beds, the E-meter never registered that she felt anything less than fury towards them.

Haddish's bunk bed beef may have been an overall benefit in her life, though. Her refusal to sleep in the beds somehow got her out of the billion-year contract she signed with the Church of Scientology when she walked in the door. That freedom allowed her to move on to the next phase of her life, during which she developed her voice as a stand-up comic, and eventually landed her in all the roles that we all know and love her for.

Haddish's life story is an inspiring invitation for people to reconsider what they know about the world and examine how people from different background may view different elements of life. What can seem like a simple way to maximize bed space to one is a horrifying trap to another. Haddish has come a long way from MacLarren Hall, but it's clear that those memories still live with her to this day.