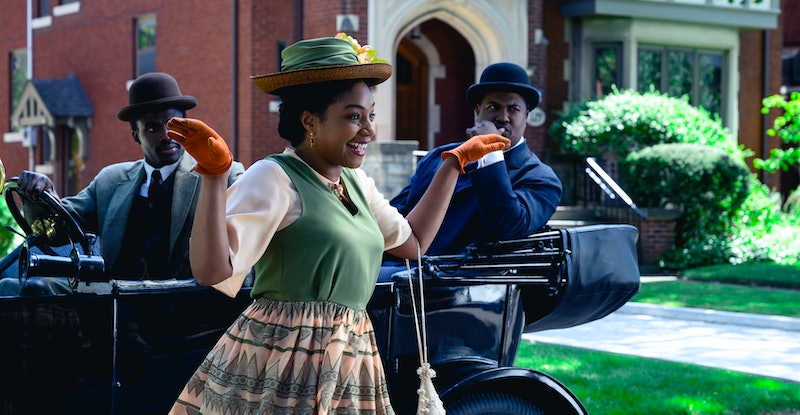 Spoilers ahead for Self-Made. As Octavia Spencer's Madam C.J. Walker became a successful entrepreneur, she had her daughter, Lelia, by her side. Just like Walker, Tiffany Haddish's Self-Made character is based on a real person, as adapted from a biography written by Walker's great-great-granddaughter, A'Lelia Bundles. Though Walker is the main subject of the book, Lelia lived a fascinating life as well and carved out her own place in history through her involvement in the Harlem Renaissance.

On her website, Bundles explains that she wrote a report on her great-grandmother Lelia in high school long before she became the official biographer of Walker. Walker was the first self-made female millionaire in the United States through her line of haircare products for black women. While Walker is depicted as more business-minded in Self-Made, her daughter Lelia knew how to entertain. As the miniseries shows, Lelia really came into her own when she relocated from Indianapolis to New York City where she embraced the cultural freedom Harlem offered in the early 20th century.

Before she began working for her mother, Lelia attended Knoxville College in Tennessee. She oversaw the Pittsburgh operations of her mother's business from 1908 to 1914, which included running the cosmetology school named after her, Lelia College. Lelia then moved to New York where she became the manager of the Walker College of Hair Culture in 1914. She assumed control over her mother's business empire after Walker died in 1919. Below is a photo of Lelia getting her nails done at one of her mother's salons.

But the lasting legacy of Lelia (who changed her name to A'Lelia in 1922) may be her cultural contributions. As the National Trust for Historic Preservation wrote, Lelia would host parties at the New York City location of the Walker Studio, which also served as her home. This townhouse was referred to as the Dark Tower and figures from the Harlem Renaissance, like Zora Neale Hurston, W.E.B. Du Bois, and Langston Hughes, would party there. In his autobiography The Big Sea, Hughes called A'Lelia "the joy goddess of Harlem's 1920s."

A'Lelia would also throw parties at her mother's mansion in Irvington, New York — Villa Lewaro. Like the cosmetology school, NPR reported the estate was also named for A'Lelia and the elaborate events she hosted there weren't exclusive. Hugh Ryan for NPR's Code Switch wrote that A'Lelia's parties notably provided "a safe, welcoming environment for queer people ... Walker's parties were places where anyone could express their sexuality however they pleased."

Although Haddish's Lelia is portrayed as dating women following her unhappy marriage to John Robinson in Self-Made, the Code Switch column notes she was not known to be lesbian or bisexual. For BlackPast.org, Bundles wrote that her great-great-grandmother had three husbands during her lifetime — Robinson, Dr. Wiley Merlio Wilson, and Dr. James Arthur Kennedy. So this plot point in Self-Made seems to be more a testament to her progressive support of the LGBTQ community.

Like the series shows, A'Lelia did not have any biological children. But she did adopt Fairy Mae Bryant, who became known as Mae Walker and was Bundles' grandmother. A'Lelia died in 1931. But just as Bundles has immortalized Walker, she wrote on her website that she's currently working on a biography about A'Lelia to be published in 2021 called The Joy Goddess of Harlem: A'Lelia Walker and the Harlem Renaissance. And maybe with its release, Haddish's energetic and fun-loving Self-Made character will get a miniseries of her own highlighting her contributions to the Harlem Renaissance.