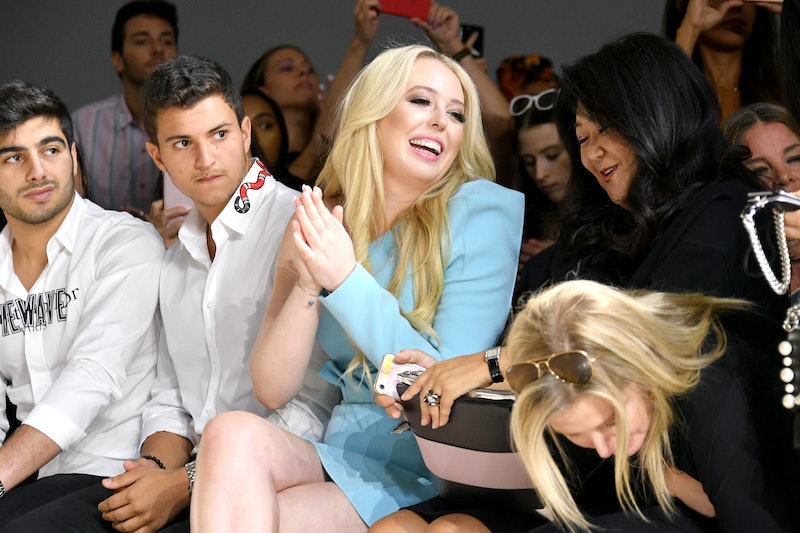 Tiffany Trump, President Donald Trump's fourth child, certainly isn't the Trump who gets scrutinized in the media the most — but she still gets all the benefits of being part of the first family. One of these, of course, is a constant Secret Service attaché, and, as it turns out, her lifestyle means that this often costs a pretty penny. Tiffany Trump's trip to the Cannes Film Festival cost taxpayers over $20,000, according to Quartz, and that's far from the only expensive overseas trip she's taken during her father's time in the Oval Office.

The paparazzi spotted Trump in Cannes with her boyfriend, Michael Boulos, who she's been with since the fall, according to The Daily Mail. Quartz reported that it then found a Department of State contract revealing that Trump's Secret Service detail had stayed at the five-star JW Marriott during her four-day stay in France, at a cost of $19,213. Taking the Secret Service's transport costs into account, this trip amounted to more than $20,000 total. Bustle has reached out to the U.S. State Department for comment.

Trump is currently a student at Georgetown Law, and records show that she's also used other school breaks to take overseas trips that cost amounts similar to the Cannes trip.

In March, for example, Trump's spring break trip to the Serbian capital of Belgrade cost taxpayers at least $23,000. Belgrade was named the cheapest city to visit in Europe in the fall of 2018, as Lonely Planet reported, but according to Quartz, she and her Secret Service staff stayed at the Square Nine hotel in Belgrade, where rooms run upward of $290 per night. According to local Serbian media, Trump stayed in Belgrade for 11 nights in total, even putting a picture on Instagram with a caption reading, "Hello from Serbia," in Serbian.

In July 2017, Trump took another long overseas trip, this time to Berlin, Germany, as CBS News reported at the time. Hotel rooms alone for Trump's Secret Service contingent cost $22,439 — and that was just in Berlin. CBS reported that Trump visited the Hungarian capital of Budapest on the same trip, but the report did not include any record of how much that additional segment of her trip cost. Again, this $22,439 did not include transport for the members of the Secret Service.

Trump, of course, isn't the only member of her family to incur significant taxpayer costs because of her travel habits. President Donald Trump's trips to Mar-a-Lago cost about $3.4 million each, as NPR reported, and as of mid-April, NBC News reported that he had spent 99 days of his presidency at Mar-a-Lago. NPR also reported that Secret Service costs for trips of Donald Trump Jr.'s and Eric Trump's during the first two months of their father's presidency cost almost $400,000.

While Tiffany Trump's travels took her beyond the reach of her family's hotel brand, President Donald Trump's properties have received hundreds of thousands of dollars of taxpayer funds since he became president, according to Axios, not to mention the free publicity whenever the president goes to stay or play golf at one of his own resorts. Given that perspective, the reported costs of Tiffany Trump's overseas travels are just a drop in the bucket.