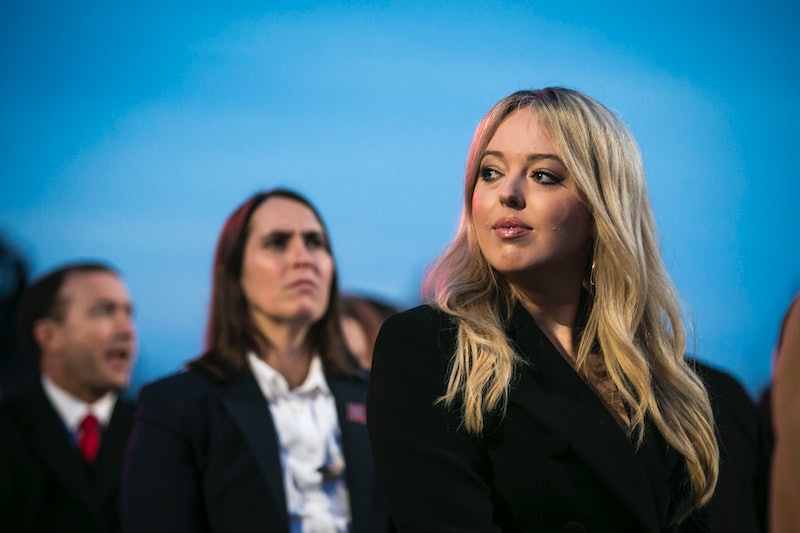 Most of President Donald Trump's family was in attendance for his first State of the Union last year, and it was no different this year. Most of his children were there, including Tiffany Trump, whose SOTU outfit had some wondering if she was giving a subtle nod to suffragettes.

Just a bit before the speech began, Donald Trump Jr. tweeted a photo of his girlfriend Kimberly Guilfoyle, most of his siblings, and their spouses ready for Trump's SOTU address. Tiffany could be seen in the group wearing a white dress, though it's not clear if she was following the House Democratic Women’s Working Group's request to wear the color to show solidarity with the women of the suffrage movement.

Unlike her siblings, Tiffany doesn't appear in the media spotlight that often. She attended her father's speech in Congress in 2018, but has otherwise hardly made appearances at the president's political events. Last year, the White House confirmed to reporters, "All of the president’s children, along with the first lady, will be at the State of the Union, with the exclusion of Barron."

In 2018, Tiffany's outfit at the State of the Union became a topic of discussion. At the time, the first daughter wore a white top accompanied with a black belt and pencil skirt. Some pointed out that it bore resemblance with the black dresses worn by women Democrats, who decided on the color as part of the #SOTUBlackout protest during the president's speech.

The purpose of the black outfit demonstration in 2018, led by women like Rep. Lois Frankel who is chair of the Democratic Women's Working Group, was to amplify the voices of sexual assault survivors and highlight gender inequality in the United States. Frankel told Vox at the time that #SOTUBlackout was meant to send "a message of solidarity with those who are seeking economic security and a cultural shift that enables men and women to work side by side, in safety and dignity, free of sexual harassment, and be paid fairly for the value of their work."

This year Frankel's group sent another political message by donning white dresses and suits during the president's SOTU address. Frankel told CNN, "Wearing suffragette white is a respectful message of solidarity with women across the country, and a declaration that we will not go back on our hard-earned rights."

Some people may think that Tiffany borrowed a sartorial tip from Melania Trump's book. In 2018, the first lady wore a white pantsuit to her husband's State of the Union address. On Tuesday night, however, she was seen wearing a dark coat dress.

Trump's State of the Union speech comes following the end of the longest government shutdown in U.S. history. He accepted House Speaker Nancy Pelosi's invitation to address Congress in February, writing in a letter to Pelosi on Jan. 29, "It is my great honor to accept. We have a great story to tell and yet, great goals to achieve!"