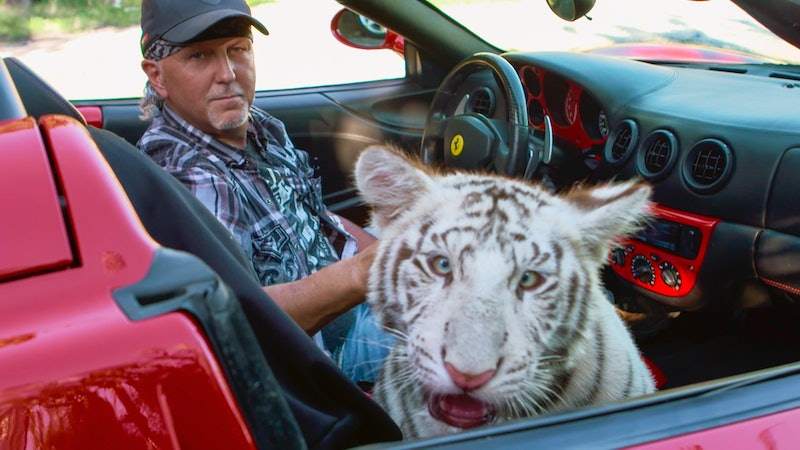 The lives of Joseph Maldonado-Passage, better known as Joe Exotic, and animal rights activist Carole Baskin have captivated the world. But if the Tiger King directors make a sequel or spinoff, the plan is to focus less on the larger than life personalities of the humans, and more on the mistreatment of the animals in roadside zoos. Currently, there are no plans for a spinoff in the works, but in a new interview with The Washington Post, documentary filmmakers Rebecca Chaiklin, and Eric Goode revealed that if one was to happen, they would want to focus on activists trying to keep exotic animals in their natural habitat.

Considering just how beyond belief Joe Exotic's story of attempted murder-for-hire and big cat exploitation is, making a documentary about the animals as engaging as Tiger King wouldn't be an easy task. "You don’t want to just completely bum people out. But at the same time, at the end, making it hopefully clear that this was a horrible practice," Goode said, admitting that the message wasn't exactly the main focus of the docuseries.

"We may do a follow-up that would explain this, but it’s quite dense when you start explaining the genetics and the bottlenecks and the inbreeding and the congenital issues that happen between tigers, and the distinction between the six remaining subspecies of tigers left on earth," he continued. "We tried, with sit-down interviews with conservation biologists that really understand all of that, and it’s just really hard to weave it into the story."

Despite not being able to delve into the scientific reasons why the practices of people like Maldonado-Passage are so inhumane, the directors are hopeful that people are walking away from Tiger King with a better understanding of why big cats need protection. "We wanted to tell the story, but at the end have the takeaway be that there was horrible suffering and exploitation of these cats," Goode said. "I think you're going to see as time goes by that it is going to be very positive that so many people saw the series, and it will hopefully make real change."

Goode told The Post that he believes there's already evidence that Tiger King is raising awareness of the Big Cat Public Safety Act. The bill is currently in Congress, and if passed, it would ban most private ownership of big cats, as well as public contact with big cats (which is fueled by cruel breeding practices to supply roadside zoos with a steady stream of cubs). According to the director, a congressperson recently contacted him to share that the show could help the bill get the votes it needs to pass.

A spinoff that further drives home the need for stricter big cat ownership laws, as well as focusing on true conservation to protect these animals in the wild would be welcome. However, even if a more animal focused Tiger King spinoff doesn't come to fruition, the documentary series is still bringing attention to the mistreatment of big cats — despite the message being somewhat hidden behind the wild, but true story of Joe Exotic.

More like this
Here’s Everything Coming To & Leaving Netflix In July
By Grace Wehniainen
Bachelor Nation's Blake Horstmann Is Dating 'Love Is Blind' Star Giannina Gibelli
By Jake Viswanath and Radhika Menon
Move Over, 'Sunset'! The Drama-Filled Trailer For 'Selling The OC' Is Here
By Nola Ojomu
What’s New On Netflix: The Return Of 'The Umbrella Academy'
By Arya Roshanian
Get Even More From Bustle — Sign Up For The Newsletter