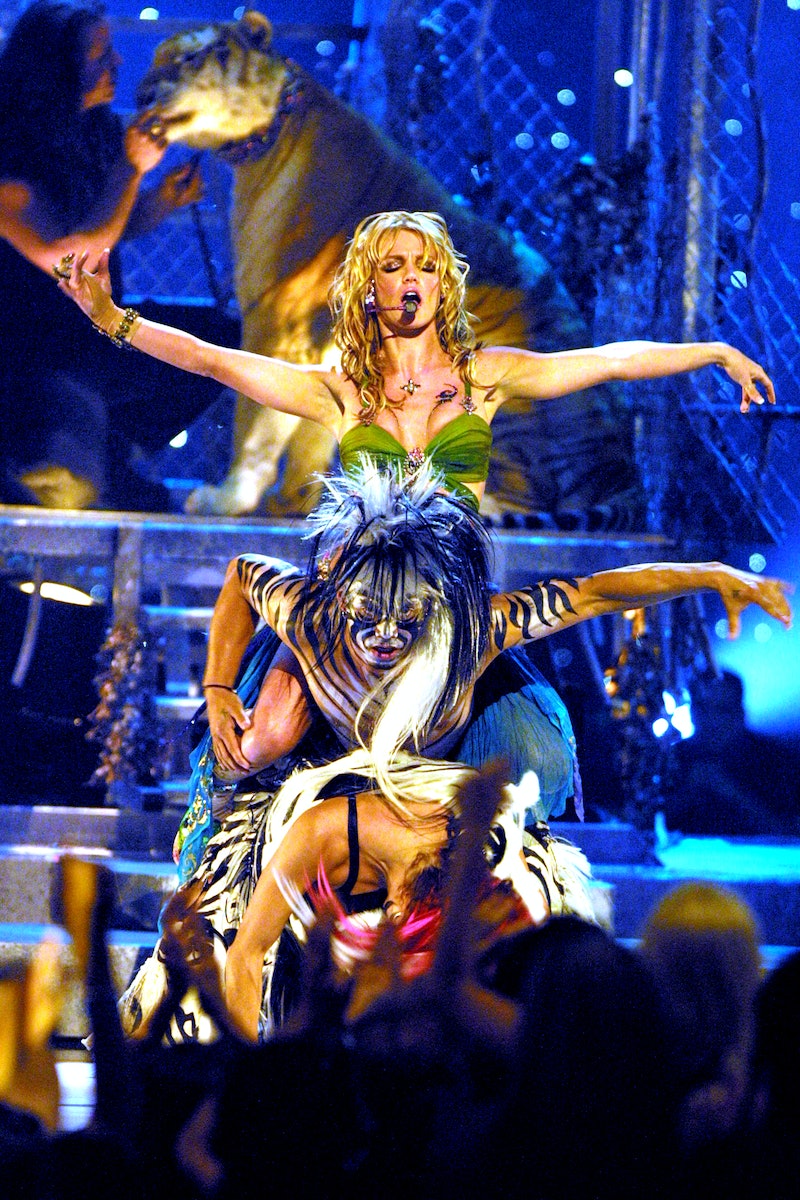 Just a few days after eagle-eyed Tiger King fans spotted him in the background of one of the most iconic awards show performances of all time, Bhagavan "Doc" Antle is opening up about working with the princess of pop back in 2001. In a recent interview with Entertainment Weekly, Doc Antle talked about working with Britney Spears for the 2001 VMAs, and he had nothing but good things to say about the whole experience.

While Spears' performance of "I'm A Slave 4 U" at the 2001 MTV Video Music Awards is best known for her sexy choreography and the giant snake she held while dancing, now it's going to be known for something else entirely. It turns out, Antle also appeared onstage during that performance — in fact, he can be spotted next to Spears at the start of the number, as she makes her grand entrance by walking out of the tiger cage onto the stage. "[Spears] was such a darling, totally just a fanatic person wanting a perfect performance," Antle told ET about working with the pop star to create the now-iconic moment. "She was ... just the hardest working, sweetest young girl, out there making all the pieces click together."

"We were there for several days rehearsing so that the tigers would be relaxed and happy to be out there and that everything could be smooth and taken care of as best as possible," he revealed, adding that Spears took time to get to know the tiger before the big night. "Because there's so many women trainers that raised him from a cub and hung out with him ... he just thought Britney was one more friend," Antle recalled. "She petted him and was hugging on him and hanging out there with him." He also revealed that the singer's entire family, including mother Lynne and sister Jamie Lynn, stopped by to meet the tiger cubs during rehearsals.

The tiger in question was around seven years old when he appeared on the VMAs stage alongside Spears, and though Antle described him as a "super macho, aggressive male," he was actually the perfect choice for such an elaborate performance. "That's the tiger that you go somewhere like that with because he cares less about the fireworks, the gas explosions, the banging music. He's totally concerned with just holding his own and being cool."

Though he hasn't worked with Spears since 2001, the T.I.G.E.R.S. founder said the singer and her family have an open invitation to come visit his facility any time she wants. "Brit knows who we are and where we are," he said, before including a quick dig the Tiger King producers and how they portrayed him and his employees. "Right now [though], I'm sure with the Hollywood vibe, she'd be afraid that it’s on fire with all of this crazy salacious, insanity that has been made into Tiger King."

Regardless of whether or not Spears ever does visit Antle at the Myrtle Beach Safari — or if she's even seen Tiger King — the renewed interest in Antle and his tigers gives everyone an excuse to revisit Spears' iconic 2001 performance. You know, when they need a break from watching Tiger King over and over again.