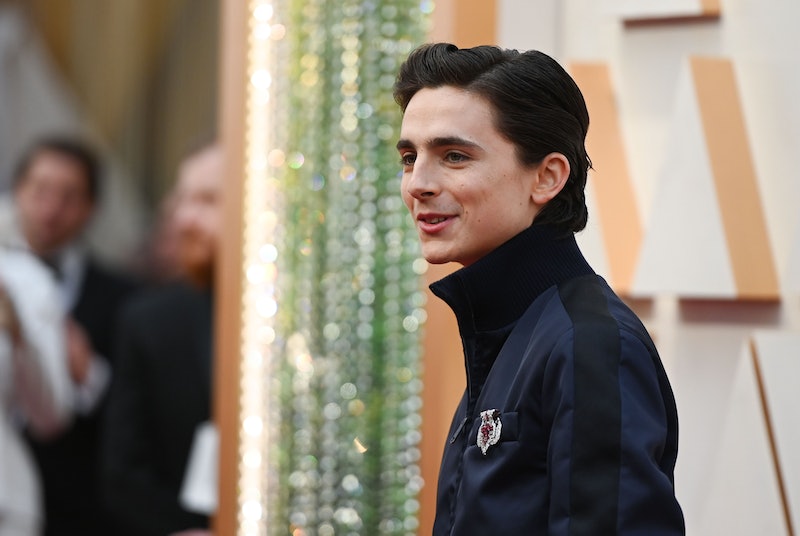 Let's be honest: there were only a few reasons people tuned into the Oscars this year, and one of them was to see Timothée Chalamet grace the 2020 Oscars red carpet with his Little Women co-stars. He did not disappoint, although he did raise eyebrows for arriving in what looked like a private school uniform and proceeding to photobomb Margot Robbie on the red carpet. Really, it's the sort of thing that only Chalamet and his cheekbones could pull off.

Chalamet attended the 92nd Academy Awards in support of Little Women, which was nominated for six awards including Best Picture and Best Adapted Screenplay. Instead of donning a traditional tux, the actor went for a more street-style look — a navy blue Prada suit that walked the dangerous line between fashion and, well, looking like a valet attendant. It was all very Big European Dad energy.

The dad energy continued as he posed on the red carpet and then backtracked when he saw Bombshell actor Margot Robbie posing behind him. He sneaked up behind her for the cameras, inciting a pleased reaction from Robbie that all but absolved his tracksuit.

Robbie and Chalamet have never starred in a movie together, but they do run in the same circles. Timmy is besties with Saoirse Ronan, who starred with Robbie in Mary Queen of Scots last year, and they were both nominated at the 2018 Oscars — Robbie for I, Tonya and Chalamet for Call Me By Your Name — so they must have become red carpet and award ceremony after-party friends at some point.

But while Robbie and hardcore Chalamet stans were pleased to see him, many people on the internet could not see past this look.

It Was Pretty Bad, After All

Still, any Timothée sighting is a good one — even if he might need to ask Margot or Saoirse for a better stylist recommendation.

More like this
14 Women To Watch This Oscar Season
By Marina Watts
Paul Mescal, Man Of Mystery
By Samantha Leach and Heather Hazzan
Olivia Wilde Addresses *Those* Florence Pugh & Shia LaBeouf Rumours
By El Hunt and Sam Ramsden
Here’s Everything Coming To & Leaving Netflix In October
By Jake Viswanath
Get Even More From Bustle — Sign Up For The Newsletter