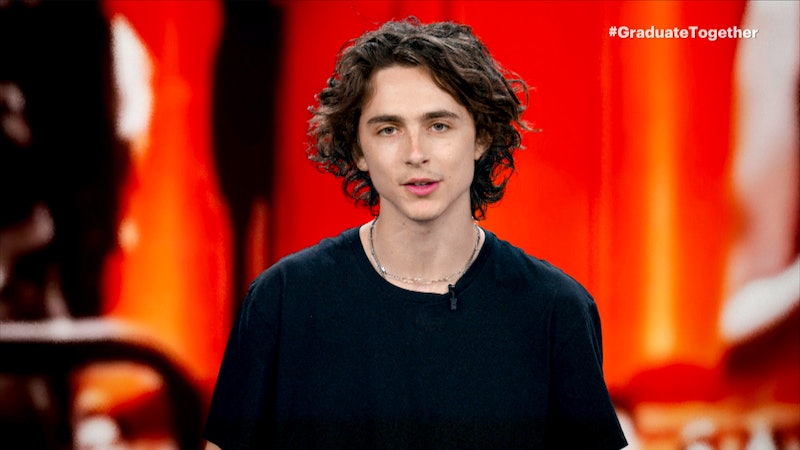 Oscar-nominated actor (and former rapper of statistics) Timothée Chalamet appeared on Graduate Together: America Honors the High School Class of 2020 on May 16 to celebrate high school graduates across the country — and his segment referenced a viral moment from his days as a student himself. Curated by LeBron James, the star-studded virtual ceremony featured a commencement address from Barack Obama, and segments from Zendaya, Malala Yousafzai, Bad Bunny, Olivia Wilde, and more. In his segment, Chalamet celebrated seniors from his alma mater, New York’s LaGuardia High School of Music & Art and Performing Arts, and honored his past teachers in a callback to a viral video.

"I'm happy to get a chance to be here and to celebrate with all of you tonight," Chalamet said in his segment. "I can't imagine what the last couple of months has been like for students, let alone for high school seniors, and not being able to attend your graduation ceremonies.” Pointing to a screen behind him with footage of seniors, he continued, “I'm joined by this year's 2020 graduates from LaGuardia High School, who are behind me in thanking those teachers who inspire us."

Shouting out his own teachers Mr. Lobenhofer, Ms. Faison, and Ms. Lawton, Chalamet concluded, “Thank you for your valiant efforts to teach me the art of statistics. Thank you for everything. Congratulations to the class of 2020.”

Of course, Twitter users collectively lost their minds at the reference.

Chalamet’s Graduate Together cameo comes after the Call Me by Your Name actor offered a glimpse into his quarantine life with a blurry, caption-less Instagram photo of the inside of his pantry. The May 14 image shows, among other items, a bottle of honey toppled over, a box of macaroni and cheese, and some Triscuits. It prompted a “Timothée Chalamet as things in his pantry” Twitter thread and has been dubbed as highly relatable in all its mundane gloom.

Perhaps an original rap about quarantine pantry items is on the horizon. Until then, Chalamet fans have his unexpected Miss Lawton shout out to keep them celebrating this man of many talents.