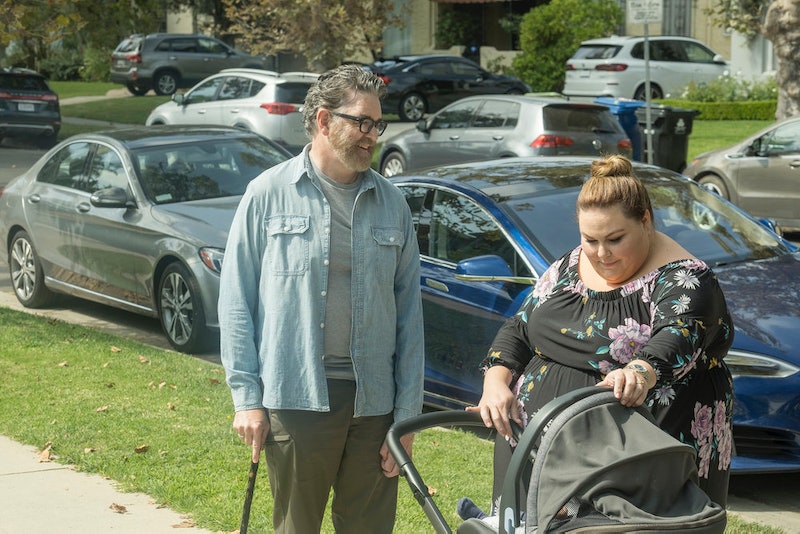 The Pearsons may be the heart and soul of This Is Us, but the Season 4 guest stars are already proving to make their mark on the series in very significant ways. This now includes Timothy Omundson, who plays Kate's neighbor Gregory on This Is Us, and was introduced during last week's episode "Unhinged." Initially, he came across as cold and hostile, complaining to Kate several times about how her and Toby's car is always parked on the sidewalk, which blocks his path during his daily walk. Typically, this would make him a petty jerk, which is what it seemed like until Gregory explained why this was so important to him: he's recovering from a major stroke. This means he's had to re-learn how to do everything — including walking — so having his path barricaded on the sidewalk makes things all the more difficult for him.

Kate ultimately came to an understanding with her new neighbor. But while it was nice to see Kate find a friendship in such an unlikely place, the actor who plays Gregory shares more in common with his character than fans may realize since Omundson himself suffered a stroke almost two and a half years ago in April 2017. In fact, series creator Dan Fogelman actually wrote the role specifically for Omundson, allowing art to imitate the actor's real-life recovery — something that's meant a great deal to him on a very personal level.

"I was really excited to dig into this stroke recovery story, and just tell it warts and all," Omundson told TVLine during a recent interview, while adding that the vulnerability this role required of him was challenging but very cathartic. "There’s a scene coming up where we talk more about specific issues of recovery from a stroke, which I’m really happy [the show] is bringing up. In many ways, this show has helped my recovery. Emotionally, it’s been incredible."

This marks Omundson's return to TV for the first time since his stroke, though he's hardly a stranger to the small screen and should very familiar to Psych fans. Best known for playing police chief Carlton “Lassie” Lassiter, Omundson is set to reprise the role in the upcoming sequel Psych 2: Lassie Come Home. He also starred as King Richard in Galavant and portrayed Sean Potter in Judging Amy.

But as much as fans may love to see Omundson back on their TV screens, that's nothing compared to what the actor himself feels about his big comeback, which he made a point of expressing on Twitter to his many followers on Oct 8, hours before making his This Is Us debut. He wrote, "kind of a big day for me Just over 2 years ago, a stroke almost killed me. Tonight, I’m returning to Prime Time Network Television Thanks to @Dan_Fogelman and the great people @NBCThisisUs hope you’ll turn in. #suckitstroke#Tim2.0

Back in April, Omundson took to Instagram to celebrate the two year anniversary of his stroke while wearing a shirt that read, "Not Dead Yet." In the caption, he wrote: "Today marks my second anniversary of Stroke Survival. In spite of its best efforts, I can still wear this ⁦‪@frankturner‬⁩ t-shirt," which was also accompanied by the hashtag #SuckItStroke.

Omundson's sense of humor and lust for life is more palpable than ever. And while it remains unclear how long his guest arc on This Is Us will last for, his character's story is made all the more moving to watch knowing what Omundson himself has gone through in real life and what it took for him to be back on TV once again — where he so rightfully belongs.

More like this
Who Is Liam Neeson's Character In The Obi-Wan Kenobi Finale?
By Kadin Burnett
Viktor Hargreeves’ Coming Out Scenes Are The Sweetest Part Of Umbrella Academy Season 3
By Gretchen Smail
Here's Why You'll See Less Of Olivia Rodrigo In 'HSMTMTS' Season 3
By Bustle Editors
Everything To Know About The Flash Season 9
By Brad Witter
Get Even More From Bustle — Sign Up For The Newsletter