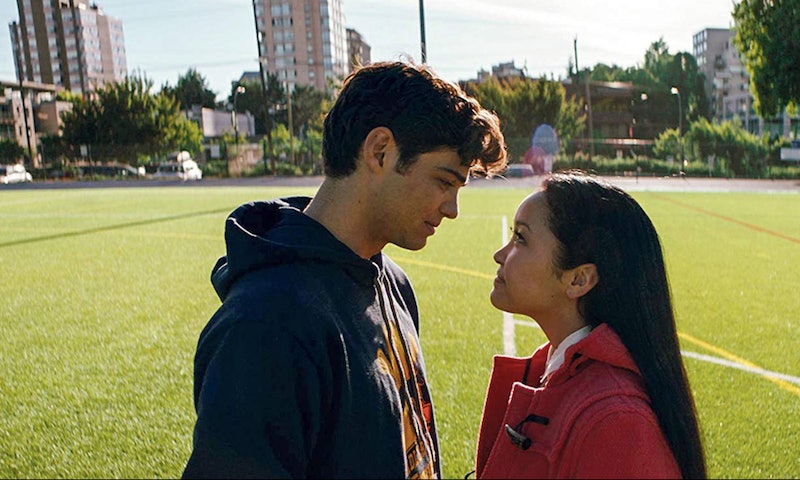 I've got some news that will warm your heart, YA fans. To All the Boys I've Loved Before costumes make Jenny Han cry in the best possible way, because they showcase the importance of representative casting. The movie is one of two book-based films to score wins for Asian-American representation this year, with the other being Crazy Rich Asians, based on Kevin Kwan's novel of the same name.

Netflix's book-based teen romance, To All the Boys I've Loved Before, has been lauded for its diverse cast, but it might not have been true to the novel if the author hadn't been willing and able to go to bat for her characters. In the book, protagonist Lara Jean and her sisters are the daughters of their Korean mother and white father, but Han told Teen Vogue in an August interview that Hollywood wanted to whitewash the girls on screen. Han's revelation came on the heels of a similar statement from Kwan, who said that some pitches he received involved recasting his Chinese-American female lead, Rachel Chu, as a white woman. According to The Hollywood Reporter, one potential producer had the audacity to say, "It's a pity you don't have a white character."

Over the weekend, when thousands dressed up for Halloween parties, Han's Twitter mentions lit up as fans began to share their Lara Jean costumes. Han shared many of them in this thread, introducing them with a line from Lara Jean herself: "There are very limited options for Asian girls on Halloween. Like one year I went as Velma from Scooby-Doo, but people just asked me if I was a manga character."

Speaking with Teen Vogue, Han said that "the more alarming part of" Hollywood's desire to whitewash her Asian-American lead "was that people didn’t understand why that was an issue." Two years after the #whitewashedOUT hashtag took over the Internet to highlight the lack of Asian representation in western TV and film media, Asian-American actors and creators continue to have to fight for a place at the table.

Hollywood whitewashers like to suggest that a film cannot do well with a lead actor of color. But films with predominantly non-white casts are rarely promoted with the same fervor and funding that are given to white-led movies, and POC-starring films aren't made often enough for anyone to say, with certainty, that they don't do well at the box office. Crazy Rich Asians was the No. 1 movie at the box office when it premiered in August, and Black Panther broke multiple records for raking in cash with its February opening. In 2017, Girls Trip became the biggest comedy of the year when it hit theaters in July.

Speaking with BuzzFeed about her fans' costumes, Han said that she "had . . . tears of joy from" seeing the response to To All the Boys I've Loved Before. "The joy of it was seeing their faces," Han said. "I saw the smiles and they looked so proud and joyful. And just as an Asian-American woman, I think there's a sense of, like, belonging to something [that emerged] when I saw those photos."

To All the Boys I've Loved Before is streaming on Netflix now, and you can see plenty of Lara Jean Covey costumes on Jenny Han's Twitter.