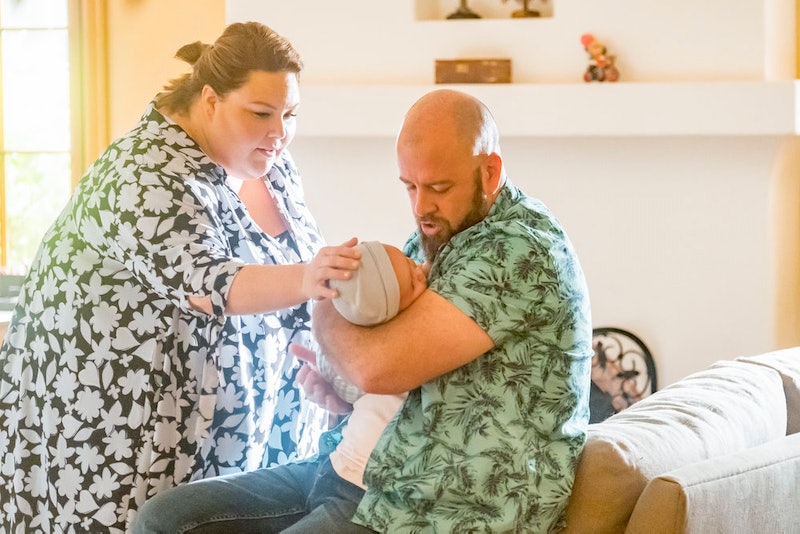 As fans have suspected for some time, Kate and Toby's relationship may end up taking a wrong turn. And Toby's secret on This Is Us, as revealed in the show's Oct. 1 episode, could be the reason why. At the end of "The Pool: Part Two," it was revealed that Toby has been sneaking off to the gym, which is why he's really been losing weight. He's been passing off his weight loss as stress-related, when in fact, he's been secretly exercising, telling Kate he's going to the grocery store as a cover. For now, Kate seems totally oblivious to Toby's hobby, but when she does learn the truth, actor Chrissy Metz hinted it could change their marriage for good.

While chatting with People, Metz (Kate) and Chris Sullivan (Toby) discussed the relationship issues their characters are going to face due to Toby's lie. "I don’t think that fans will necessarily expect the secrets that Toby was keeping and how that’ll affect their relationship and moving forward," Metz teased. She continued to explain that trust is a form of intimacy, telling People, "The physical stuff is great and wonderful, but real intimacy is trust and so there’s a bit of trust that’s broken in him keeping this weight loss and working out a secret. We’ll see how that evolves and unfolds with them."

Toby, as Sullivan told People, is worried about his health now that he's a father. Like Kate, Toby has struggled with his weight. He also had a heart attack in Season 1 and has gone through depression on the show. "As of right now, it seems like Toby's figured out where his priorities are, and his priorities are staying alive as long as possible for his son," Sullivan said. "As we’re coming into the fourth season, it becomes a real conversation about what we do with the time that we have. I think the thing that Toby has learned up until episode two is that we don’t have that much time."

Regardless of his reasons, the fact that Toby is keeping a secret from his wife is definitely cause for concern, especially as the two are adjusting to life as parents of a newborn with blindness. Moreover, it could hint at Kate's absence in the future. In Season 3 finale's future timeline, Toby arrived at Kevin's house without Kate. Upon his arrival, Toby said to Randall, "I just talked to Jack and they're on their way." Earlier episodes also showed future Toby without a wedding ring.

For those who think Toby might be referring to the newly introduced adult Jack and Lucy, that actually can't be. According to an EW interview with creator Dan Fogelman about Season 4, the future with adult Jack and Lucy shown in the Season 4 premiere is about 10 years after the future in the Season 3 finale with an apparently ill Rebecca. Per Fogelman, the future with old Rebecca is "the deep future" and the one with Jack and Lucy is "the deeper future." So, it seems even more probable that Toby in "the deep future" was referring to Kate and Jack, and that he and Kate may no longer be together.

Whether their potentially troubled "deep future" is related to this recent revelation remains to be seen.

More like this
Who Plays Trent In 'Never Have I Ever'? Benjamin Norris Calls His Character A “Himbo Stoner”
By Grace Wehniainen and Radhika Menon
Gabby & Rachel Reveal How That 'Bachelorette' Rose Ceremony Twist Happened
By Grace Wehniainen
Everything To Know About 'Westworld' Season 5
By Sophia Moore
Everything To Know About 'Evil' Season 4
By Meguire Hennes
Get Even More From Bustle — Sign Up For The Newsletter