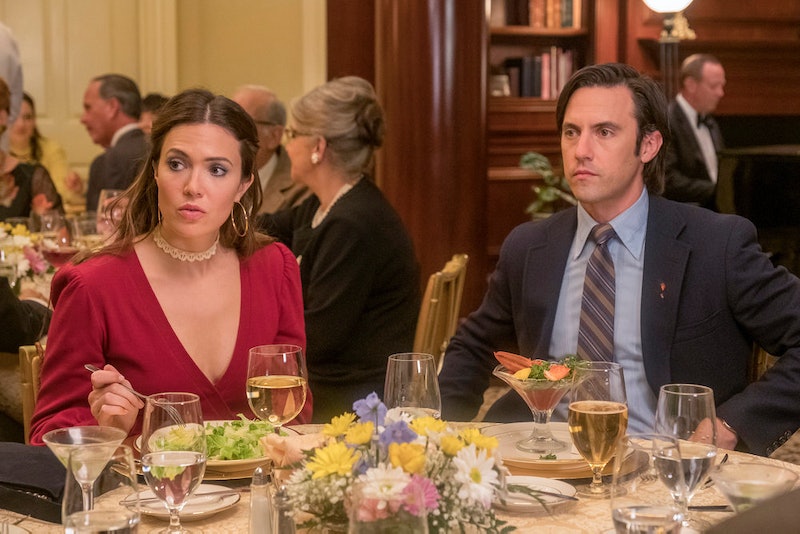 There's no denying that This Is Us is a pretty complicated show. There are many important characters, twists and turns almost every episode, and the show has complex timelines in the past, present, and future. Keeping track of it all just week to week can be a lot, let alone during a lengthy hiatus. It's been five months since the This Is Us Season 3 finale left fans with about a million questions. Before This is Us Season 4 can add even more questions to that list and never nearly enough answers, no one will judge you for needing a recap of This Is Us Season 3 to remember all the biggest plot points.

So much happened in Season 3. Now that Jack's cause of death is long behind us, the show explored more of its characters' present day lives and showed us glimpses of their future in Season 3. That future looks pretty bleak for several of the characters (justice for Miguel and Rebecca), which Season 4 will no doubt explain and expand on.

Until then, here's everything that fans need to know about all the events of Season 3 — past, present, and future.

In The Past — Jack & Rebecca

Season 3 gave viewers a further glimpse at the early days of Jack and Rebecca, including the fact that they one spontaneously drove to Los Angeles together so that Rebecca could try her hand at professional singing. The show also revealed that Rebecca had very nearly almost moved to New York with her previous boyfriend Alan, but she was so swept up in meeting Jack and trying to live out her dreams that she chose the LA trip instead.

The vacation brings them close together and cements their relationship, but Rebecca ultimately doesn't make it as a recording artist there after a musical bigwig tells her she was only fit for Pittsburgh singing. The two return home and start their lives together.

In The Past — The Big Three

After Jack's death, Kate, Kevin, and Randall all struggle in different ways, while Rebecca also deals with a bout of pretty severe depression. Kevin begins drinking, a problem he will later deal with as an adult. Kate decides not to go to finish college. And Randall turns down his Howard acceptance to stay close to home and be there for his family. He does eventually go to college, where he actually meets a young Beth.

Toby and Beth both get flashbacks in Season 3. Toby's shows his history of anxiety and depression that he would often mask by making jokes. Beth's flashback shows the death of her father as well as her childhood dreams of being a ballerina. Those dreams were crushed when her too-practical mother refused to pay for dance classes anymore, thinking that Beth wasn't good enough to make it professionally.

Randall wants to effect change in the Philadelphia neighborhood where his father's old building is, so he decides to run for city council. At the same time, Beth gets laid off from her job and struggles to find a new one. She eventually joins Randall's campaign, but she clashes with Randall's experienced campaign manager Jae-won.

Beth and Randall's marriage is tested by his campaign workload, and Beth eventually asks him to quit running. Randall refuses, and he ends up winning the election. Beth rediscovers her love for dance and begins teaching classes. Between her class schedule and Randall's city council duties, they're extremely busy. Neither of them wants to sacrifice their passion — and Beth tells Randall that she's always the one who sacrifices.

There are several moments throughout the season where it looks like they may split up, but they keep coming back together to work things out. In the end, Randall decides to resign but Beth instead sells their home to relocate their family to Philadelphia. There, Randall can finish out his term and Beth can open her own dance studio.

Randall and Beth officially adopt Deja, but she mentions that she still wants to see her birth mother at some point. Beth promises to make that happen, but it still hasn't. Randall and Beth's daughter Tess comes out as gay in this season, and her parents are accepting but concerned about being there for Tess during this time while also being so busy with work.

Kate and Toby decide to have a baby, even though their chances are low. To improve their odds, Toby goes off his anti-depressants. Kate does end up getting pregnant, but Toby's mood suffers immensely because of his going off the medicine. Kate convinces him to go back on the meds, but it takes time for Toby to get better.

Meanwhile, Kate signs up for community college to complete the degree she never got. She graduates, and then she goes into early labor, making her fear for the baby's safety. The baby is very small at birth, and has to breathe via a ventilator. Kate names him Jack. Toby has a hard time bonding with him at first, because of all the wires and tubes, but Kate bonds with him almost immediately. Miguel and Rebecca think about moving to California to help Kate with baby Jack, but Rebecca is also pretty overbearing with regards to Jack's medical treatment, so that close proximity to her mother may be an issue for Kate. Towards the end of the season, baby Jack is strong enough to be taken home.

Kevin begins dating Beth's cousin Zoe, and the two of them journey to Vietnam together to learn more about Jack's time in the war. Their relationship moves steadily forward, with Kevin telling Zoe he loves her and asking her to move in. She agrees, but it takes her a while to unpack her things, so you can tell she's not falling as quickly as Kevin did. Part of that seems to stem from Zoe's childhood where she was molested by her father. She tells Kevin this story but also pledges not to let it hurt her chance at a real relationship with Kevin.

Their relationship is tested when Kevin begins drinking again and lying about it. Zoe stays by his side while he gets sober, but the two later break up when Kevin decides he wants kids and Zoe doesn't. Kevin was prepared to accept not having kids in order to stay with her, but Zoe sees how he is around his nieces and makes the decision for him by leaving.

Kevin also visits Sophie in New York during Season 3 and learns that she is engaged to another man.

In The Past — Jack's Brother Nicky

Season 3 introduces viewers to Jack's little brother Nicky. As a child, Nicky is a fun-loving boy with big dreams. When he gets drafted into the Vietnam war, those dreams die. Jack, worried about his brother and wanting to honor his pledge to always look out for him, enlists for the army so he can meet up with Nicky. Jack's kids had thought he was a mechanic in Vietnam, but it turns out that he was on the frontlines. He sees a lot of people die, but he's a good leader, so he is eventually allowed to reunite with Nicky.

The war has been hard on Nicky too, and he turns to drugs and alcohol to get himself through it. Nicky also has a great disdain for the soldiers' Vietnamese neighbors, who were mostly women and children. Nicky even refuses to help an injured Vietnamese boy. Jack ends up helping instead and receives his iconic compass necklace as a thank you gift from the boy's mom. Later, Nicky ends up killing that boy with a grenade gone wrong. It was an accident, but Jack never knew that. He thought Nicky did it on purpose, and it was the final straw for Jack. They both made it home from the war, but Jack didn't speak of Nicky or to Nicky. He saw him briefly in the '90s, but only to tell Nicky to stop reaching out to him.

Kevin eventually learns that Nicky is still alive and he, Randall, and Kate go visit him. By then, Nicky is a sad loner who lives in a trailer. He dismisses the Big Three's attempts to help him and they leave. But, Kevin decides to return and comes back just in time because Nicky was drinking and had a gun in his had. He is distraught over never having told Jack that the boy's death was an accident. With the Big Three's help (and Rebecca's, when she later shows up), Nicky agrees to go to a meeting for Veterans and try to get some help.

The mysterious "her" who Randall, Tess, and Toby went to meet in one of the early season flash forwards turns out to be Rebecca. She is very sick and seems to have lost her memory. The whole family gathers together to see her. In that future storyline, Randall and Beth are still married, Kevin has a son, Nicky is at Rebecca's bedside, Toby and Kate don't go to the house together, and Miguel is nowhere to be seen. And thus begins the endless stream of questions that fans now have and hope to be answered in Season 4.

More like this
Netflix Just Revealed When 'Never Have I Ever' Seasons 3 Will Premiere
By Gretchen Smail and Alyssa Lapid
'Unforgotten's Brand New Character Joins At A Pivotal Moment For S5
By Bustle UK
'Bosch: Legacy 'Is Bringing Its Beloved Main Character Back
By Kadin Burnett
Will The Pentaverate Get A Season 2?
By Kadin Burnett
Get Even More From Bustle — Sign Up For The Newsletter