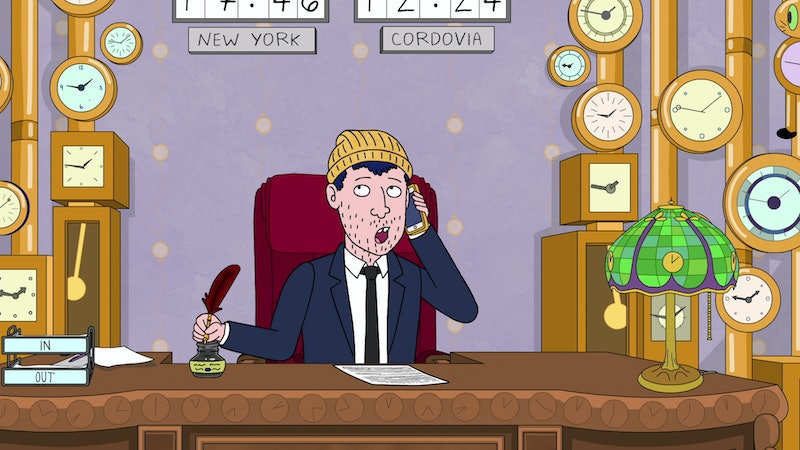 I’ve never connected with any character more than I do with cartoon Aaron Paul, a.k.a. BoJack Horseman’s Todd Chavez, as he lies on his couch, exasperated, refreshing a dating app. It’s All About That Ace, the asexual-centric one his friend Emily built just for him. The scene cuts before we see any matches load. I suspect none do. Pickings, for me and for Todd and for many asexual people interested in dating, are often slim.

It’s been two years since BoJack first hinted at Todd’s asexuality. The word “asexual” didn’t come up right away, because it wasn’t a label Todd had considered. Ever since, especially in Season 5, which dropped on Netflix in September, the show has fleshed out his compelling character arc in a way that’s heartwarming, funny, and empathetic — without ever bordering on didactic.

Todd’s coming out was a leap forward for mainstream television, which doesn’t frequently acknowledge the vast range of asexual identities. Like Todd, many asexual people are sex-averse, but others sometimes pursue it, either because they’re interested in sleeping with people they develop emotional connections with (demisexual or gray asexual), or as a means of pleasuring partners who aren’t ace (the umbrella term for those in the asexual community). And as Todd patiently explains to Emily’s firefighter boyfriend at the start of Season 5, some asexual people experience romantic attraction; others are aromantic.

Most ace characters on TV besides Todd are relegated to one-off punchlines, implied to be unfeeling sociopaths, or stuck in headcanon. At other times, characters’ asexuality is actively erased (looking at you, Riverdale). So a sustained, sensitive story arc involving a main character is a huge breakthrough for asexual viewers; it was also the catalyst for my own coming out. But to move the representation conversation forward, we must go beyond lauding the mere act of putting an ace character on screen and examine why exactly the effort works so well.

BoJack’s success is in its precision. The show doesn’t force Todd to speak for everyone in the very diverse ace community. He’s still the same man-child he’s always been: yellow-hatted, kindhearted, aimless, and adventure-prone to the extreme. From the get-go, the show has tackled serious issues in thoughtful, earnest ways beneath a delightful veneer of rapid-fire pop culture references, vibrant colors, and animal puns. Topics like depression, addiction, abortion, marital issues, and family trauma are difficult for any show to depict sensitively and effectively, but the animated cartoon about the horse excels. BoJack creator Raphael Bob-Waksberg, who brought in an ace woman consultant to learn more about her experiences and identity, handles asexuality no differently.

Animation, because it offers an inherent visual distance from reality, lends itself well to depicting bolder ideas that some viewers may not be knowledgeable about or comfortable with. “We have a character who’s a talking horse. We have a character who’s three young boys stacked on top of each other under a trench coat,” Bob-Waksberg tells Bustle, laughing. “The idea of like, 'Would an asexual character be too much for our audience to handle?' It feels like no, they’re going to go with it.”

Watching an asexual cartoon — even a very well-written one with emotional depth — doesn’t come with the same degree of realness that live-action asexual characters would. Todd is palatable, or “unassailable,” so to speak, as an asexual man, because he’s white (and possibly Latino, though the show hasn’t broached that to date), cisgender, and able-bodied, with no history of sexual trauma (that we know of). There’s no foreseeable “cure” for his orientation, no easy way to dismiss it.

I feel alone still, but more understood in my loneliness, thanks to Todd.

Bob-Waksberg hasn’t always gotten representation right, as he’s acknowledged, but he does seem to have thought critically about his past missteps, like choosing a white actor voice Vietnamese-American character Diane Nguyen, and worked to diversify the kinds of people he’s shining a light on.

“I would love it if like, 10 years from now, people look back at BoJack and watch some of our asexual episodes that describe what asexuality is and how it works and the different kinds of asexuals and go, ‘Duh. This is so boring. Everyone knows this stuff,’” Bob-Waksberg says. Even with explanations for certain ace terms and concepts, the show’s foray into Todd’s exploration of sexual identity has felt restrained and clever throughout. In Season 3, Todd felt broken. In Season 4, he identified as asexual, slowly came out to people, and met other aces. In Season 5, BoJack really sets him loose, offering subtle but hilarious commentary on what it means to be asexual in a hyper-sexualized world.

Asexual people, the tired stereotype goes, are uptight, self-serious, cold-blooded. Todd, who grapples with his asexuality in only a fraction of his scenes, has always been the opposite. The show flips the script on ace misconceptions by dropping Todd into situations where his asexuality is more relatable to viewers of all orientations than the hyper-sexualized culture engulfing him.

Todd’s sillier moments give way to more heartfelt examinations of what it can feel like to be asexual. He and Emily (Abbi Jacobson), who dated in high school, share a connection, romantically and as friends. “You were the best boyfriend I ever had,” she tells him. “If only there was a version of you that I could have sex with, I’d be all set.” Todd, who broke up with Yolanda after they realized they had nothing in common aside from being ace, tries to satisfy Emily by building a homegrown, crude-looking robot who appears to be a bunch of dildos, a couple of latex gloves, and some googly eyes hastily glued together.

Henry Fondle is, on the surface, a classic Todd gag. But it leads to a meaningful conversation with Emily about whether Todd is one of those aces willing to have sex sometimes. Alas, he isn’t, and he’s crushed. The pain of connecting with people on all levels but one isn’t easy to bear, hence Todd resorting to scrolling hopelessly through an under-trafficked ace-specific dating app.

No show’s portrayal of anything is 100 percent perfect. The statistic Todd cites to Emily about how only 1 percent of the population is asexual isn’t necessarily accurate; the truth is that research is limited and we have no real sense of how many people are ace. The show would also do well to stop using “asexual” as a noun, which can sound dehumanizing, and instead stick to “asexual people” or “aces.” More broadly, Bob-Waksberg conceded that the initial decision to make Todd ace stemmed in part from his own stereotypical notion that the orientation is linked to childishness, but that doesn’t prevail over three years (and counting) worth of multifacted ace story lines.

But ultimately, those are minor quibbles for a show that captures so well what it feels like to be alone and know that the vast majority of people out there can’t offer you the kind of relationship you want, whether it’s romantic or platonic, and can’t dispel your deep, dark fear that at age 100 you’ll get back with one of the only other people in the world you know to be ace, regardless of how insufferable you find them. In introducing ace terminology to Todd, and by extension, viewers, BoJack had to walk before it could run, let alone enlist a sex robot to wheel circles around us. I feel alone still, but more understood in my loneliness, thanks to Todd.