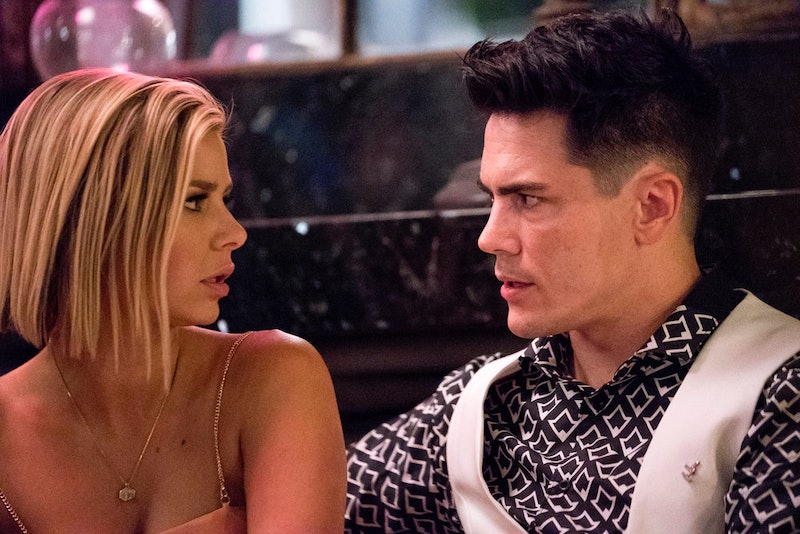 One of the rewards of being a longtime Vanderpump Rules fan is watching the cast grow up — or at least watching them attempt to. Though they're still drinking Fireball shots and fighting like they’re 22 years old and in a college fraternity party, Katie, Kristen, Jax, the Toms, and Stassi are indeed maturing, albeit in their own ways. Katie and Tom Schwartz are married. Stassi is headed that way with Beau. Even Jax is reforming and moving forward now that he's engaged to Brittany. But just because some of the cast is taking the more traditional route for their futures doesn’t mean that everyone has to. That’s why everyone on Vanderpump Rules has to stop asking Ariana when she’s ready to have kids.

Ariana and Tom Sandoval are together and very much in love, but there is a main pain point in their relationship: Sandoval wants to get married and have children, and Ariana wants to do neither of those things. She’s expressed before that the idea of being pregnant is gross to her, and she doesn’t want to even adopt a child or be responsible for someone else until she’s done everything and been everywhere that she wants to go. Now, Ariana is in her 30s, and a woman only has so much time to naturally have a baby before science needs to intervene or she says, “No, I am good where I am.” Ariana has said as much, so why does everyone keep asking when she'll change her mind?

This issue came to a boiling point on the Mar. 4 episode of Vanderpump Rules, when Sandoval’s buddies, mostly Jax and Schwartz, asked if the couple wants kids. Sandoval wants them, but he said Ariana doesn’t, and that’s when the questions started — is that difference of opinion a dealbreaker? Has he issued an ultimatum? Why doesn’t Ariana want babies? Will they break up? These are all questions that perhaps a friend group would ask, but because Ariana has repeatedly said, over and over, that she’s not into the traditional rites of marriage and babies, Sandoval’s friends are way out of line.

Firstly, Sandoval and Ariana’s relationship is their business. Secondly, Ariana’s uterus is her business. If these two decide as a couple that they do or do not want kids, that’s on them. But it’s not up to Sandoval’s friends — or Sandoval using his friend’s assertion that he needs to set an ultimatum — to decide that for Sandoval and Ariana. Schwartz says that Sandoval needs to decree an ultimatum to Ariana because that's what made him marry Katie, and that's... not the best example of a healthy relationship.

The idea that Ariana is strange because she doesn’t want kids or will regret that she never had them is a tale as old as time, used to guilt women who don’t want children into having them. Telling a woman who has vowed to stay childless that she’ll change her mind or will be sad in the future if she doesn’t have kids is to take her own agency away, to tell her that her own feelings don’t matter. It shocks those with the traditional view of womanhood and femininity when a woman chooses not to be a mother. But yes, women can decide for themselves that they don't want to have kids for any reason they so choose. It's totally fine.

Ariana has been in her body for thirty-something years. She knows what she wants, and if one of those things is to not have children, so be it. Let’s trust Ariana to make the decisions that are right for her and to communicate with her partner about her wishes. It’s not anybody on Vanderpump Rules' right to decide but her own.

More like this
Dan Levy Appears In The Latest Teaser For The Weeknd's HBO Series, 'The Idol'
By Jake Viswanath
9 Movies & TV Shows That Prove Stanley Tucci Elevates Everything He’s In
By Jake Viswanath and Radhika Menon
Friend Of The Family Kidnapper Robert Berchtold Saw Jan Broberg Again In 2004
By Brad Witter
This New 'Grey's Anatomy' Intern's Connection To Derek Can Be Traced Back To Season 1
By Grace Wehniainen
Get Even More From Bustle — Sign Up For The Newsletter