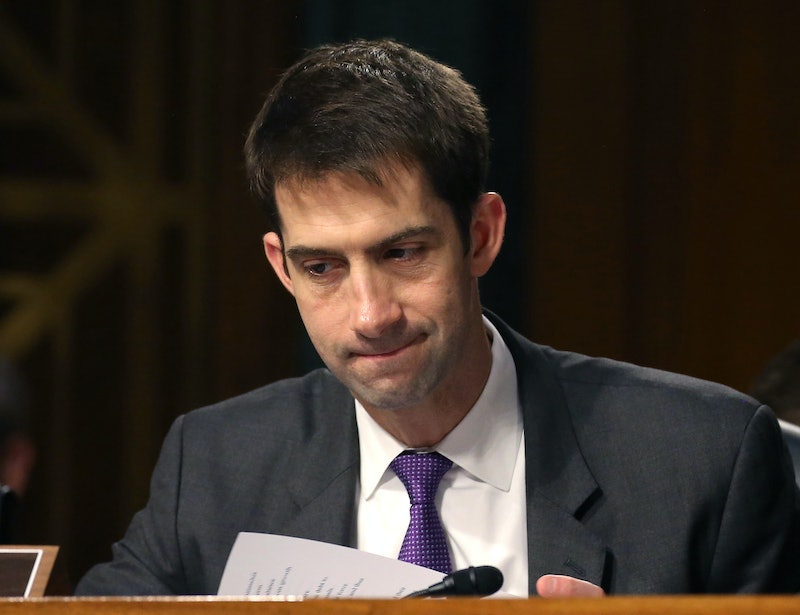 On Wednesday, a certain Arkansas senator you may not have been familiar with until now took the spotlight — and not for a good reason. That evening, Sen. Tom Cotton held a town hall and faced pressing questions from concerned citizens. One of the most memorable moments of the event was a man's question about Donald Trump's Access Hollywood remarks. Cotton's contemplative face upon hearing the question speaks volumes about America's new president and why his own party still has to think twice before standing behind him.

As Cotton took questions from the crowd, one man brought up a point that cannot be forgotten:

If you call yourself a Christian man, if you call yourself an Arkansan citizen, an American citizen that stands for the Constitution, that represents kids like me, like them, in the city of Washington D.C. with the world watching us, are you making the right decisions for these kids that are reading those textbooks while you are supporting the policies of a man who wants to grab women by the pussy?

In a 2005 hot mic recording, Trump did indeed say "And when you’re a star, they let you do it." "You can do anything," he continued. "Grab them by the pussy." He later denied ever acting upon it, and dismissed it as "locker room talk," as though "grab them by the pussy" was a rude, but ultimately innocent utterance you should be comfortable hearing.

Well, America may have forgotten about Trump's comments and his refusal to confront the very real problem of sexual assault, but that doesn't mean they're comfortable with it. And it certainly doesn't mean they should accept it because he's now the president of the United States.

According to the Rape, Abuse & Incest National Network, otherwise known as RAINN, an American is sexually assaulted every 98 seconds. To make matters even worse, a child is sexually assaulted every eight minutes. By crudely dismissing his comments that come across as an endorsement of sexual assault, as well as the women who came forward and accused him of sexual assault (he has denied all allegations), Trump displayed extreme carelessness. Either that or he was ignorant of the frequency with which sexual assault occurs in America. Regardless, these traits are not ideal for a leader, especially for a leader children will be reading about in text books one day.

Trump's Access Hollywood remarks may have faded into the background, but his approach to numerous policy decisions thus far suggests his careless behavior won't change.