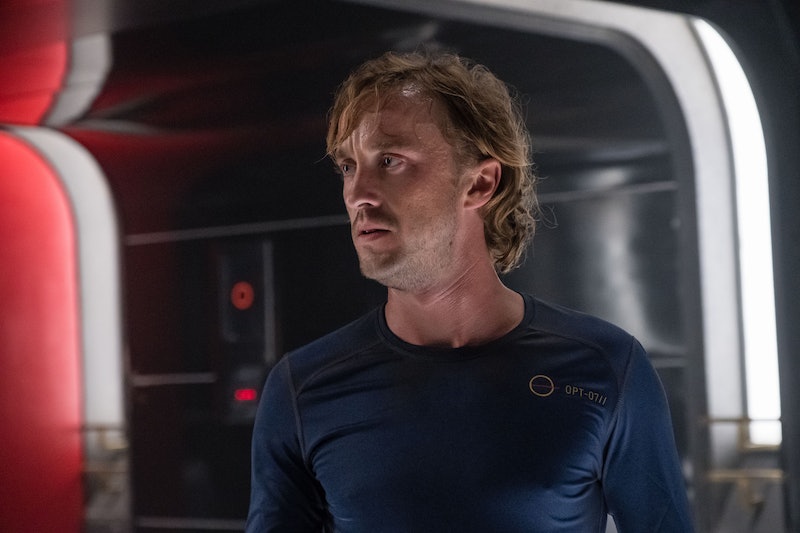 Tom Felton has proven time and again that he's so much more than Draco Malfoy, his brooding, villainous and complicated Harry Potter alter ego. But still, it’s impossible to deny that his portrayal of the iconic character is what cultivated a fan base that hasn’t gone anywhere in the years since the original film series concluded. He's continued to branch out into new roles, and with YouTube's new series Origin, the actor delves in some familiar territory while still proving he’s not to be put in a box. Tom Felton’s newest character in Origin will remind you of Draco Malfoy, and the complexity Felton brought to that character, but Felton says Origin's Logan is anything but a retread of old ground.

“They are definitely similar in [some] regard, in two very different circumstances,” Felton says over the phone in mid-October. The premise of Origin is one built for tension — set in a not-so-distant future, a group of people is sent to help colonize a new planet for human inhabitance. They all want to leave life on Earth behind for reasons revealed through flashbacks, and they’re put to sleep for the duration of the flight, scheduled to be awoken when they’ve reached their destination. The problem? The group wakes up too early, only to find a damaged spaceship and a missing crew. Hate when that happens, right?

Felton’s character, Logan, is one member of the group who immediately rubs some of the others the wrong way as they struggle to figure out what’s happening. He’s a little abrasive and antagonistic, but Felton’s performance never lets Logan become a real villain, or someone you can’t empathize with. Underneath a defensive, hardened exterior, you can see that at his core, he’s just terrified, like any of us would be in that situation. Malfoy is a more severe antagonist than Logan by all counts, but the same notes of disguised pain exist in both.

“Draco is someone who, on the surface, is a confident bully — someone that takes great power from diminishing other people. As you know, that’s not the truth, and it all comes from the fact that he’s got terrible parents, and he never really had much love,” Felton says. “Logan is in a very different set of circumstances — he’s more just been tossed aside by society, and never really been given a fair chance… Logan’s not entitled at all — he’s not snobby. He’s just dejected, and feels like he’s never really probably fit in anywhere, so his default is to be aggressive.”

Though they’re certainly not all he has up his sleeve, Felton says he enjoys playing these kinds of nuanced, more-than-meets-the-eye kind of characters. “I just find that really enjoyable,” he says. “To try and take the character on that journey where on the surface it looks like [they’re a villain], but in reality they’re probably the ones who are suffering the most."

No matter what you might think in the pilot episode when you meet Logan, Felton insists viewers keep an open mind as they get to know him. “He’s not a jerk at all. He’s a bit of a hot head, and he’s got a foul mouth, and he doesn’t always know quite what to do,” he continues. “But he definitely has redeeming qualities and his character definitely enriches as the season goes on.”

Logan’s backstory is largely unknown until later in the season — each character has an episode that primarily focuses on exploring why exactly they chose to leave a life on Earth behind, and Logan’s flashbacks bring up the rear. Felton’s excited for fans to see why Logan embarked on the journey — he says it’s not what viewers might expect. “I think it’s safe to say with everyone else, [their] story is sort of a Greek tragedy. Some terrible event that happened — they lost someone or accidentally killed someone or whatever it may be,” he shares. “Logan has a much sweeter and more surprising story, I think, than people will be expecting. I’m very excited to see what people make of that.”

Felton’s had continued success after Harry Potter, and there’s no doubt he’s got even more exciting things ahead of him. He jokes that he'd love to play James Bond one day, and he also has musical talents — one of his songs is actually set to appear in an episode of Origin. He says no matter what he does, the fans who helped his career skyrocket are just as supportive as ever.

“It’s incredible, really. It’s not something that I ever envisioned happening. I think we all thought the Harry Potter fan flame would slowly die after the last films,” he says. “It’s overwhelming… but it’s fantastic. I think we’re sort of the luckiest kids alive, really, that we got to be a part of other kids’ childhoods. I’m constantly surprised by it, but always grateful. Whenever I go around the world, it’s always an opportunity to see a bunch of other fans that have kind of grown up with you, and I have the opportunity to say thank you.”

In addition to being the latest project to feature Felton's talents, Origin is an inherently thrilling, wild ride with a captivating cast and intriguing plotlines, and it's well worth a watch. And as Felton well knows, he has countless faithful fans who are eager to devour whatever he does next.

More like this
'Bridgerton' S3 Teases Exciting Social Season For Penelope Featherington
By Bustle
The 'Kenan & Kel' Reunion On 'SNL' Took A Dramatic Turn, Thanks To Keke Palmer
By Brad Witter
The First Trailer For 'That '90s Show' Includes So Many Nods To The Original Series
By Jack Irvin, Alyssa Lapid and Grace Wehniainen
How The Thanksgiving Episode Of 'Gossip Girl' Changed Pop Culture History
By Gabrielle Bondi
Get Even More From Bustle — Sign Up For The Newsletter