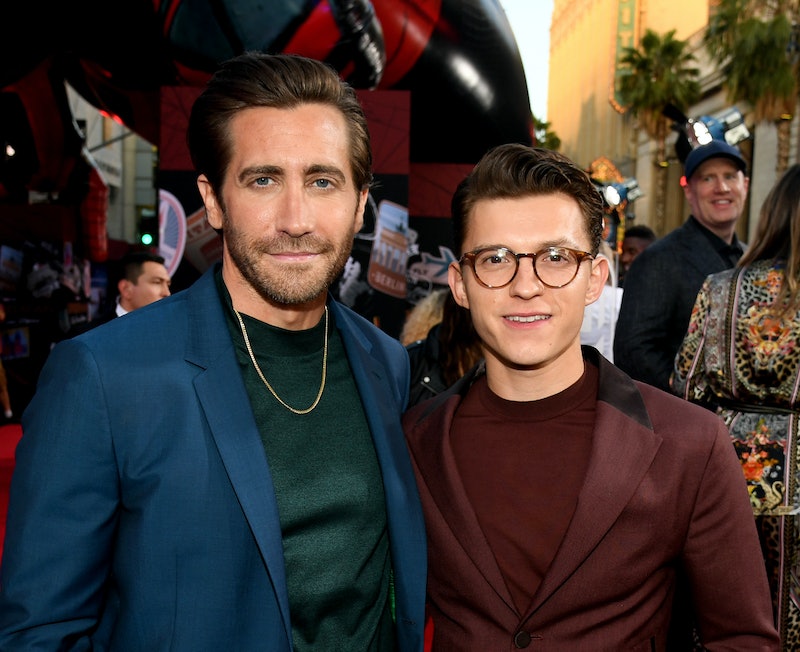 Spider-Man and Mysterio may clash as superhero and villain, but let it be known that, frankly, Tom Holland and Jake Gyllenhaal’s bromance transcends Peter Parker and MJ’s Spider-Man romance. Spider-Man: Far From Home officially hits theaters on July 2, offering fans a glimpse of Spider-Man across the pond in London, England after the chaotic events of Endgame. Gyllenhaal joins the Spider-Man universe as Mysterio, who, according to the film’s trailer, joins the elite group of Avengers. Perhaps the best part of Gyllenhaal’s casting, though, is the bromance he’s developed with his co-star Holland along the way.

According to Gyllenhaal, however, his relationship with Holland isn't even a bromance, but a straight up romance. As the actor told Good Morning Britain in June, “It’s not even a bromance; it’s a straight romance.” So, let’s just call it what it is without heteronormative phrases: a romance, filled with the actors gushing about each other during press interviews, making appearances together at Disneyland and a children's hospital, and impersonating one another.

Holland and Gyllenhaal’s beloved dynamic first emerged earlier this year. In a cast interview in April, Spider-Man: Far From Home director Jon Watts told Entertainment Weekly that the two got along on set so well that it affected the film’s production. “Sometimes they would crack each other up, and we could not get through takes occasionally,” Watts told EW. “It was a problem!” In the same interview, Holland revealed that he’s actually been wanting to work with Gyllenhaal for quite some time.

Holland gushed to EW, “If you look at any interview I’ve ever done prior to this movie and someone asked me, ‘Who would you work with if you could work with any actor?’ I would’ve said ‘Jake Gyllenhaal. And when I found out it was him, I was stoked, but also really nervous. But Jake absolutely was more than I ever could have expected.” So, yes. The British actor has long admired the Velvet Buzzsaw actor’s work. In a recent interview with EW, Holland revealed that his favorite Gyllenhaal films are Nightcrawler, Prisoners, and Prince of Persia. For Gyllenhaal, the affection is certainly mutual. During an appearance on The Tonight Show in February, Gyllenhaal gushed to Jimmy Fallon about Holland, “He’s great, dude. He’s awesome. He’s the nicest guy in the world. I’m super into him as Spider-Man.”

If that isn’t enough confirmation of their affection, there’s also that time Gyllenhaal paid homage to Holland on Valentine’s Day, the official day of love, with a heart filter. He captioned the Instagram video, “Love is in the hair.”

In May, their summer of affection continued with a trip to Disneyland alongside their Spider-Man co-stars Zendaya and Jacob Batalon. There, Zendaya, Batalon, and Gyllenhaal photobombed a group of park goers as they posed with a masked Spider-Man who just so happened to be Holland himself in disguise. In June, Zendaya, Holland, and Gyllenhaal made another surprise trip to the Children’s Hospital in Los Angeles, where they donned their Spider-Man costumes and treated the kids to an advance screening of the film. “I actually used all my webs on the way over here,” Holland told a young fan in his Spider-Man voice.

A month later, the dynamic duo brought the laughs and feels once more in a segment with LADbible. In the video, Gyllenhaal offered a hilarious impersonation of Holland. “Hey. I’m Spider-Man,” Gyllenhaal said, employing lots of hand movements. “I’m Spider-Man. Woo.” Holland replied, “Is that supposed to be funny?” In response to his take, which begins at the three-minute mark, Holland said, “That was a good impression, man. That was really good.”

The worst part about Spider-Man: Far From Home's arrival in theaters? The forthcoming absence of Holland and Gyllenhaal's dynamic during press tours. To improvise Kanye: Peter Parker and MJ, I’m gonna let you finish, but Tom Holland and Jake Gyllenhaal have the best romance of all time.