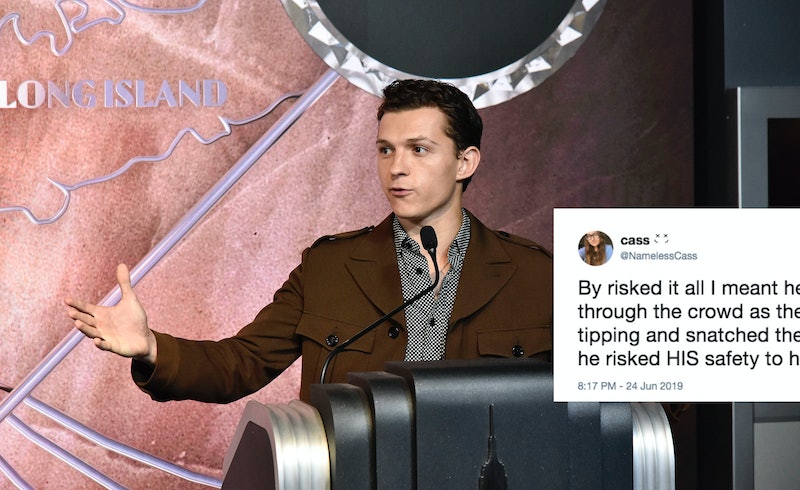 Spider-Man: Far From Home may not be out yet, but Tom Holland is proving he has the same heart of gold as Peter Parker. Twitter praised the actor on Monday, June 24 after word spread that Holland defended a panicking fan who was nearly crushed by autograph seekers.

Holland was in New York City signing autographs for fans when the incident occurred. According to Twitter user @NamelessCass, many of the people in the crowd were not, in fact, fans, but instead were what are known as "graphers," or people who get autographs from celebrities to later sell online and make a profit. When Holland arrived, people reportedly began pushing against the barricade to get an autograph from him, endangering the safety of @NamelessCass and other fans. As she recalled on Twitter,

"This was absolutely INSANE and should NEVER happen....my neck was literally against the barricade with 30 grown men behind me pushing.... ridiculous how people act like you’re not only endangering fans safety but Toms as well"

Holland quickly reacted to the uproar, and like the hero he is, looked out for the safety of his fans. @NamelessCass tweeted a video of Holland speaking to the graphers, where he said, "I'm gonna throw your sh*t on the ground if you keep pushing her."

@NamelessCass was clearly upset with the situation, tweeting later that she had been "crushed against the barricade." She can be heard telling Holland in the video, "I'm literally going to have a panic attack." Holland, despite the chaotic situation, remained calm for her sake, telling her, "It's OK, I got you, I got you."

It's so heartwarming to see that Holland, who was likely also overwhelmed with such a large group of people clamoring for his attention, still put others' safety first and wasn't afraid to speak up to protect them, even if it meant arguing with men who were older than him.

He also proved that he's a man of his word: When he told the graphers he would throw their stuff on the ground for acting the way they were, he wasn't kidding. @NamelessCass shared a photo of the aftermath, with graphers' posters on the concrete.

She shared her gratefulness for Holland after the incident, saying that Holland "risked HIS safety to help me."

Holland himself has not publicly commented on the incident as of yet. However, Twitter jumped in with their own opinions, many praising Holland for his handling of the situation and for not allowing the graphers to get away with their behavior.

Thankfully, it looks like the rest of Holland's time in New York City has been much more peaceful. The day of the incident, he visited the Empire State Building with Spider-Man costars Zendaya and Jacob Batalon, and turned the Empire State Building red and blue for The Brothers Trust, Holland's charity organization that he started with his family. It seems that no matter whether Holland is in or out of his Spider-Man suit, he's constantly committed to doing good — both for the safety of his fans, and for those in need.