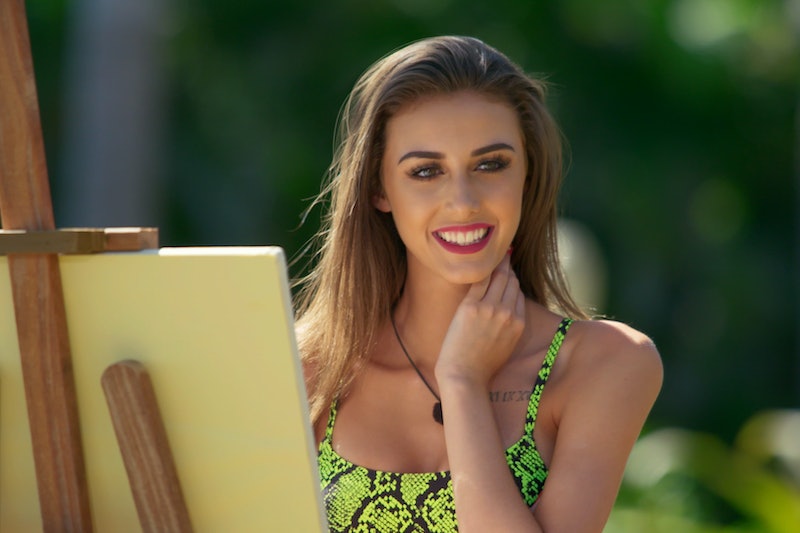 I'll be honest... I stayed up until 3am on to get through every episode of Too Hot To Handle in a single day. It was just the type of TV we all needed during quarantine, and unsurprisingly, the show became an absolute hit. Now that the reunion show has finally dropped, I got to speak to one of the show's standout stars: Chloe Veitch. Currently quarantining with her family in Essex, I jumped on a call with the British model to discuss all things love, dating, and what she really thinks of her co-stars...

First things first: what was it like filming the reunion?

Desiree [Burch] and I had a really happy, bubbly interview and she was asking me what a 'geezer' was and to explain all my slang words. The "most likely to" game we did was quite saucy too!

You've made a few headlines talking about Fran & Harry. Are they for real, do you think?

I’m not going to speak for Harry [Jowsey] or Francesca [Farago] about what went on [after Mexico] and I wasn’t really speaking to Francesca as much as I had been Harry... He’s like one of my best friends and she’s just more of a friend. But one day I just saw a picture of some stunning model on Harry’s Instagram and I thought "oh my word, he has another girlfriend." It wasn’t a secret though! Harry put it on his Instagram and there were even fan pages of their relationship. It was a thing, but it wasn’t a secret.

What about Kori [Sampson], have you spoken to him since leaving Mexico?

When filming finished and we were on the way back to the hotel, everyone on the bus started screaming because Kori had started following them. He had followed everyone else but he hadn’t followed me! So we didn’t speak for weeks, but then I messaged him just after the show came out and now we are really good friends.

We speak about mental health and ask how each other is. But he does say how my fans are giving him a little bit of sh*t. But he deserves a bit of girl power! Last time we spoke he said he has realised he needs to be a bit more honest with girls, so hopefully he has changed.

Anyone special in your life at the moment?

No, at the moment my love life and sex life is so bloody dry! It’s horrible. Being in quarantine only a few phone calls and a few texts are sent... but it’s not the same. I miss being wined and dined. I have had a few people from Love Island slide into my DM’s... I won’t name any names, but there have been a few flirty messages, I’m not going to lie! I’ve deleted all my dating apps and am focusing on myself. I just need the girls around me at the moment as I’m a little bit sad because I’m single. Most of my friends have babies so I’m one of the only single ones left.

Is it true you almost went onto Love Island instead of 2H2H? Any regrets?

I got a phone call from one of the casting team at Love Island and that was it. I was already 90% sure I was going onto the Netflix show, which at the time was called the ‘untitled dating show’. So there’s no real reason I picked it over Love Island, I was just already in the stages of signing contracts etc with THTH so I didn’t see the need to sack that off and go towards Love Island. Also, I knew what I would be walking into with Love Island, and I like risks!

I'm happy with my decision though, the show was all about emotional growth and I've come out a better woman. I couldn't have asked for anything more from the show.

What are you most looking forward to post-lockdown?

Nicole [O'Brien] and I have a group chat – the two of us and then a couple of her friends and a couple of mine – and we really want to go to Dubai. What I miss most though is just going to the pub and having a drink. So when lockdown lifts I’m going to go to London to see Nicole, go out to the pub with her, then go clubbing straight away!

I also speak to the rest of the UK people like Lydia [Clyma], David [Birtwistle], Kelz [Dyke] etc on the phone all the time and we all really want to go somewhere hot where there are NO cameras and we can all have the time of our lives!