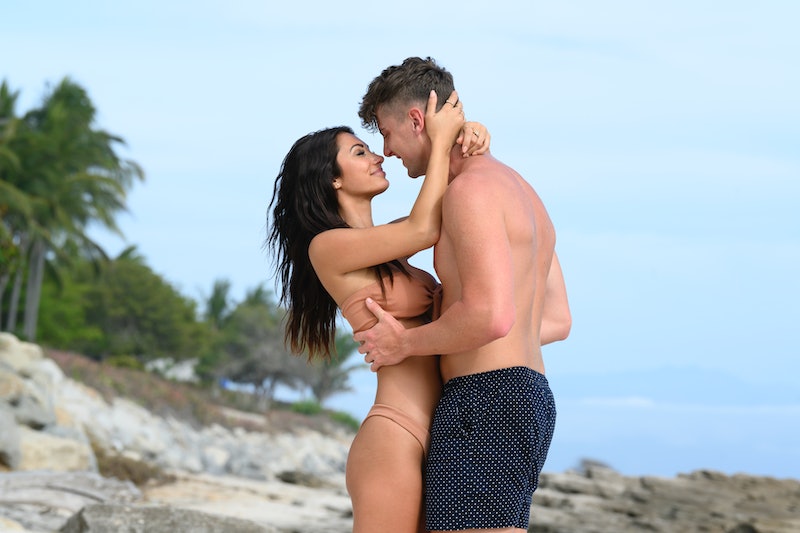 They may have found love on a reality TV show, but Harry Jowsey and Francesca Farago aren't ready to walk down the aisle just yet. During a recent interview with Variety, Francesca revealed she isn't engaged to her Too Hot To Handle costar Harry — despite the fact that the Aussie popped the question via Zoom during the reality show's reunion episode in early May. "I asked him, like, ‘Are we engaged?'" Francesca recalled of her reaction to Harry's virtual proposal over the Internet. "And he’s like, ‘I asked you to marry me, so I don’t know.'"

After instantly hitting it off on Too Hot to Handle, the couple briefly split after they returned to their respective homes after filming (Francesca is based in L.A., while Harry lives in Australia). However, in April, Harry and Francesca confirmed they had reconciled and were even talking about getting engaged, which prompted Harry's surprise proposal during the reunion. "You've absolutely changed my life. I love you so much, and I can't wait to spend forever with you," Harry told her, holding up a Ring Pop. "Do you want to do this thing? Do you want to get married?"

While she accepted in the moment, Francesca said that she and Harry are only "kind of" engaged, and that she hopes he'll try again when they're no longer on opposite sides of the world. "I think it definitely just needs to be done in-person, like a proper proposal," she told Variety. "So, as of right now, no, we’re not engaged, for everyone who’s been asking."

"I mean, we kind of are [engaged], but I don’t know because how do you really decide that via Zoom call? It’s hard to say," she continued. However, Francesca did explain that she and Harry had talked quite a bit about getting married — and that the Ring Pop was a sweet nod to those engagement conversations. "We had a shared folder about wedding rings, and he kept saying, 'What ring do you want?’ And I just said, 'Oh, just get me a Ring Pop,'" she recalled. "It was funny, it was cute, I was definitely not prepared for it. It was a cute gesture."

Even though they're not officially engaged just yet, Francesca and Harry have made their relationship permanent in another way; in April, the couple revealed that they had gotten matching tattoos, each inking a small lightning bolt on their index fingers. "I visited her when I was in Ottawa, and it was something that we wanted to get for a while," Harry told Entertainment Tonight about the tattoos, adding that it was a reminder to "stay positive and stay with Francesca!"

As for the inspiration behind the lightning bolt design, Francesca told ET that it actually came from one of the more memorable games that she and Harry played during their time on the show. "There was a challenge where I had to draw him a painting. It was supposed to be my vagina, but it was like an interpretation of what I saw," the model recalled. "I put little lightning bolts all over it, so it just kind of represented our experience as a whole together."

During the reunion, however, Harry said that there was another reason that the couple chose lightning bolts for their matching ink: "There were just so many sparks between us that we thought we may as well get it tattooed." Hopefully those sparks stay strong enough for Francesca to get a brand new proposal from Harry once they're allowed to reunite, so that they can clear this up, once and for all.