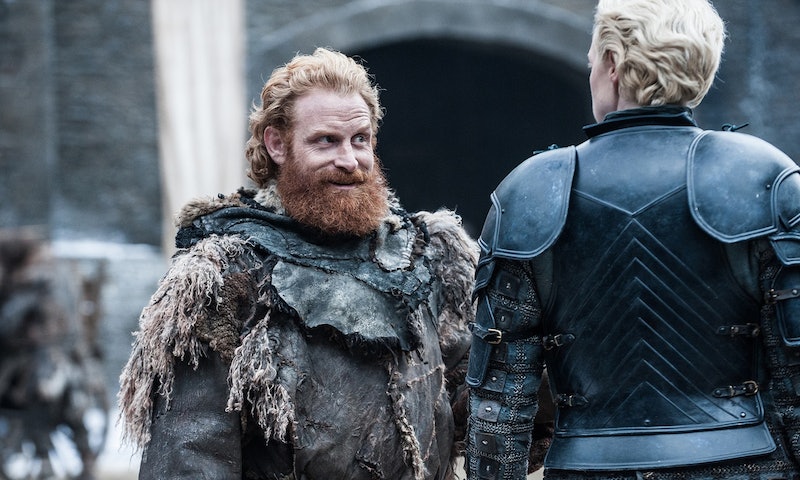 The obvious rebuttal to this is that the actor is just intensely committed to his job. After all, method acting is one of the tricks of the trade employed by everyone from actor Daniel Day-Lewis to Kate Winslet. But when you listen to Christie's take on things, it sounds... well, a trifle more caliente than the usual losing half your body weight activity often associated with method acting.

For one thing, the setting the actor cites sounds more than a little romantic. She talks about him oozing eroticism all over his sandwich when they're in a "dark tent with a gas heater burning away" when he starts "masticating wildly" at her. If that sounds filthy to you, you're not alone.

And when the TV presenter asked whether she ever finds herself laughing in response, the 38-year-old reminds him that she's a "classically trained actress" but concedes "this is possibly the one time I dissolve, without fail." Sure, this isn't exactly world-shattering evidence that the blonde reciprocates any feels from Tormund on camera. But, on the other hand, who doesn't get giggly around their crush? Even strapping warriors, apparently.

And while Christie argues that this is simply because the script was skimpy in details about the crush and simply outlines the Wildling giving her a look that she didn't see it coming, the more optimistic of those 'shipping Tormund and Brienne might read between the lines. This dedication to their roles could mean big things for the couple on-screen. After all, at least in theory, if the team behind the show see that the actors are having fun with the fictional flirtation, they’d be more inspired to flesh it out (if they needed any further motivation to take it further, since Twitter has definitely been getting overheated at the possibility of a Tormund/Brienne hook up).

It also gives viewers all the more reason to root for the fictional characters. It’s exciting to hear that the easy, natural chemistry we’ve witnessed onscreen is fueled by fun and jokes off screen. If you needed more prompting to cross your fingers for them reaching the baby making stage and realizing Tormund’s dream of them getting together and producing “great big monsters [who would] conquer the world,” this could be it.

More like this
'GoT' Star Emilia Clarke Says She "Just Can't" Watch 'House Of The Dragon'
By Brad Witter
15 Photos Of 'The Last Of Us' Star Pedro Pascal That Cement His Zaddy Status
By Radhika Menon
Netflix Shut Down 'Bridgerton' S3 Rumours About A “Very Dark” Storyline
By Bustle
Bill & Frank’s 'The Last Of Us' Episode Has Twitter Emotionally Wrecked
By Alyssa Lapid
Get Even More From Bustle — Sign Up For The Newsletter
From hair trends to relationship advice, our daily newsletter has everything you need to sound like a person who’s on TikTok, even if you aren’t.