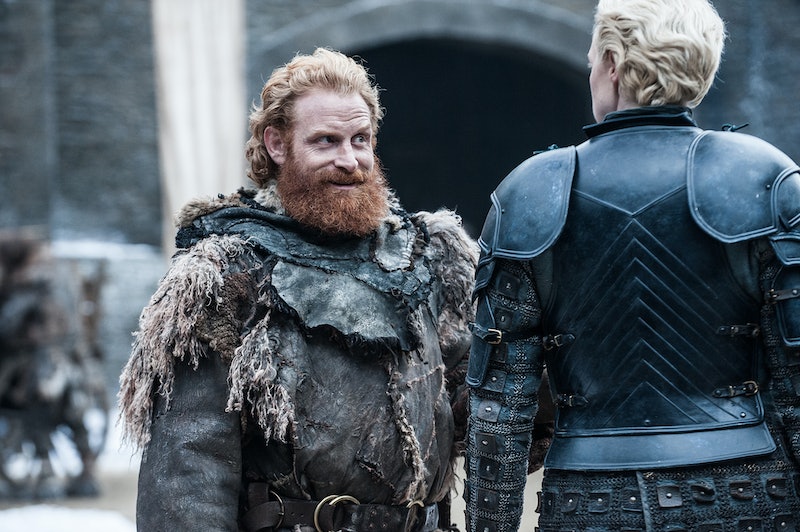 The April 21 episode of Game of Thrones was, for the most part, a serious affair. Not only were the inhabitants of Wintefell preparing for the impending White Walker onslaught, but characters were forced to set their considerable differences aside in favor of banding together to save the known world. But someone who didn't get the memo that things were serious was Tormund Giantsbane — a Wildling whose love of insane stories is matched only by his obsession with Brienne of Tarth. Tormund's best lines from Game Of Thrones Season 8 are the hilarious comic relief that both the Game of Thrones characters and audiences needed in such a somber final season.

Jon first met the terrifying large Wildling in Season 3 when he went north of the wall with the Night's Watch. But while they started as enemies, they've since become close allies and even closer friends. In fact, it was Tormund who convinced the other Free Folk to take refuge south of the wall, since the Night King was their common enemy. But while he's clearly an excellent leader, that doesn't stop him from being a total weirdo with absolutely no filter.

Not only are his flirty looks towards Brienne always a delight, but Tormund got in some excellent one-liners, which are listed here for posterity.

Yes, the White Walkers might be marching toward Winterfell, but that didn't stop Tormund from tackling his old friend, referring to Jon by his demeaning nickname.

Everyone knows that Tormund is obsessed with Brienne. He first set his eyes on her back in Season 6, and it was love at first sight — for him, at least. While she's always seemingly been disgusted by him, both then and now, that hasn't stopped Tormund from ogling her at every opportunity and calling her "The Big Woman." She probably wouldn't like the moniker, but it's somehow endearing coming from someone so earnest.

"It Could Be Our Last Night In This World, You Know"

In an attempt to proposition Brienne (or pull an Arya, if you will), Tormund points out that they're probably both going to die the next day. It does not, in fact, work.

When Tyrion offered the Wildling a drink, Tormund held up a gigantic horn, filled with his own beverage. While it's unclear what its contents were, his disturbing anecdote made it seem like he was chugging... giant's milk.

His Entire Story About Giant's Milk

While Tormund, Brienne, Jaime, and a handful of others waited for the White Walkers to arrive, the Wildling told a frankly disturbing story about how he got the name Tormund Giantsbane. "I killed a giant when I was 10," he began, at the request of absolutely no one. "Then I climbed right into bed with his wife. When she woke up, you know what she did? Suckled me at her teat for three months — thought I was her baby."

At this, Brienne looked thoroughly disgusted, but he continued. "That's how I got so strong. Giant's milk." If that weren't weird enough, he ended his story by noisily guzzling the entire contents of his horn.

This line is genuinely sweet, which Tormund says after he realizes that Brienne isn't a knight. Unfortunately for him, Jaime goes one step further, knighting her then and there. Even so, the Wildling is overcome with pride for her and claps ecstatically. She should be so lucky!

While Tormund's right that this may very well be their last night on earth, you can't help but hope but both he and Brienne will make out of this thing alive and make giant babies together. It's the least Game of Thrones could do for us, honestly. But even if that doesn't happen, at least this episode gave audiences the image of Tormund guzzling giants milk from a gigantic drinking horn to hold onto. Hey, if it was your last in Westeros, what would you do?