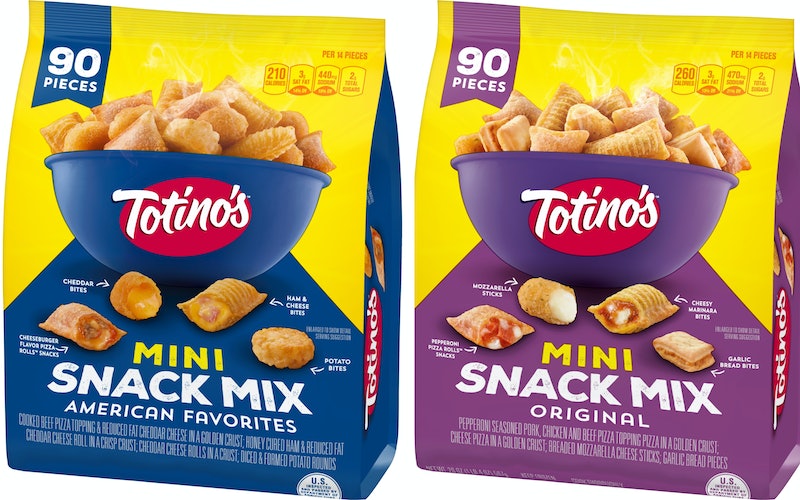 There's a bowl of party mix, and then there's Totino's new Mini Snack Mix. It puts pretzels and bagel chips to shame. With the reveal of two new Totino's Mini Snack Mixes, each of which is stuffed with a variety of snack pieces, suddenly every other mix of snacks feels lackluster at best. Why fill bowls with cheese crisps and cheese balls when you can toss mini mozzarella sticks in with mini garlic bread bites? I mean! My mind, and taste buds, have never been so blown away.

Here's the down low on the new offerings: each Mini Snack Mix comes with four different snack pieces, totaling 90 pieces per bag. You can heat a few of pieces up for a light, versatile snack or spread the entire contents of the bag across a large sheet pan to get the party — even it's of one — started.

You're going to be eager to pre heat your oven when you hear what the Totino's Mini Snack Mixes Original has in the bag. Think everything you've ever wanted from the appetizer menu mixed together in a single bag — shrunk to tender, pop-them-in-one-after-the-other bite size pieces. The Original mix contains Pepperoni Pizza Roll Snacks, Cheesy Marina Bites, Mozzarella Sticks, and Garlic Bread Bites. So long every other snack mix that ever tried to be on this level of greatness. I am a Totino's Mini Snack Mix girl now.

Even if you think this combination of appetizers was enough, there's more. The second mix is called "American Favorites" and you better believe Totino's captured both the American backyard BBQ and the American school lunch in a bag. Inside you'll find the Cheeseburger Pizza Roll Snacks, Ham and Cheese Bites, Cheddar Bites and Potato Bites. The Totino's American Favorites mix basically deserves its own national anthem. Both 90 count bags will retail for $8.79 at most grocery stores nationwide beginning in the fall. Don't just keep your eyes peeled for pumpkin spice.

Totino's has been there for us through our childhood, heated up and put on a plate after little league practice, after school, after everything. So odds are you are still familiar enough with the motions of putting as many of them as you can into your oven in one go, and eating them so fast that your tongue doesn't fully recover from the burn for a week. That's just the thing, though — Totino's isn't for the weak.

If you're having friends over for a get together, or don't want to have a dinner that's more involved than flicking on the oven, keep the Totino's new Mini Snack Mix bags in stock this fall. Even if you're not planning a pizza-themed fete, it sure is a convenient and satisfying dinner to come home to when you're not exactly sure what you're craving. Chances are, the varying pieces in the bag will tackle the problem and ultimately deliver exactly what you want. Godspeed, fellow kids of the '90s, on your epic mini Totino's quests.