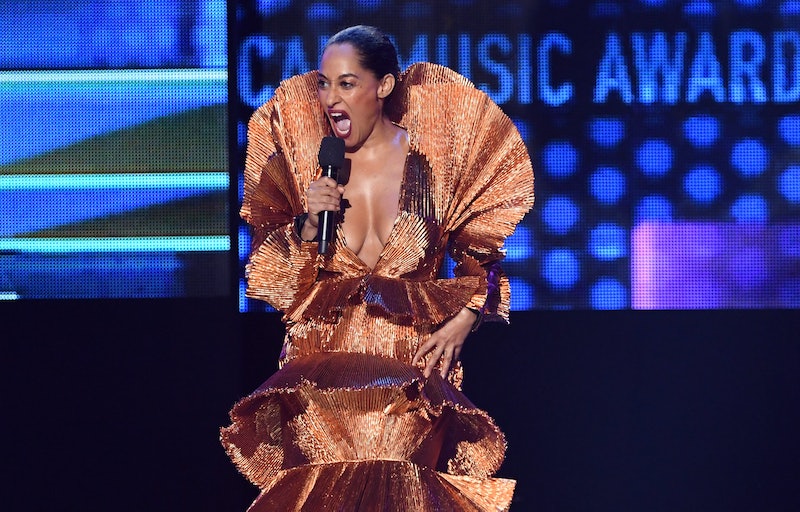 Before a single award was handed out at the 2017 American Music Awards, people had a lot to say about AMA host Tracee Ellis Ross' dress. Some found it appropriately Thanksgiving-themed, while others compared it to The Hunger Games and cupcake wrappers. Regardless, it's definitely caused quite the stir, and that's likely what Ross intended to do by wearing it. Well, maybe she wasn't specifically hoping to get those comparisons, but it was definitely a look that commanded attention from the fans.

The ruffled copper number was Ross' first of many outfits of the show, which fittingly honored her mother, the legendary singer Diana Ross, with an AMA Lifetime Achievement Award. And there's no better way to make a mark with a clothing decision than to become a meme. Ross was the talk of Twitter the instant she stepped out on stage.

From the people who praised her for stepping outside of the box with her fashion choice to those who couldn't help making some pop-culture references, there are jokes to suit everyone's sense of humor when it comes to Tracee Ellis Ross' standout orange gown.

Check out some of the most hilarious comments from some very vocal Twitter users.

She Was Celebrating Thanksgiving Early

There's nothing wrong with getting in the holiday spirit a little bit early, and it's way better than people celebrating Christmas before Thanksgiving. She's giving Thanksgiving the shine that it deserves!

She Was Impressing Her Fans

Jokes aside, it genuinely is a beautiful garment and she is definitely pulling it off.

The Dress Is Reminiscent Of A Cupcake Liner

Who doesn't love cupcakes? Why not embody their essence for an outfit?

The Hunger Games movies did always come out around this time of year. Maybe Tracee Ellis Ross just misses the movie franchise and she decided to wear a dress in its honor?

It Really is SO Hunger Games

This could be a coincidence, but it would be pretty funny if she was a big fan of the franchise and purposely wore this dress.

Is This A Diana Ross Hand-Me-Down Outfit?

The only other person who could pull of this look is Tracee's mom — the legend herself — Diana Ross.

A Lot of People Are Getting Diana Ross Vibes

That would make a lot of sense, since Diana Ross was one of the biggest guests of the night and received a lifetime achievement award. Oh yeah, and she's her mother. That definitely makes a lot of sense.

Is She Channeling A Fish?

If she is actually channeling a fish, it's not necessarily in a bad way.

The Dress Is Inciting Cupcake Cravings

There's nothing wrong with being reminded of a cupcake here and there.

That's another Diana Ross reference, of course! It's only fitting.

It Was Tough To Describe

That's one way of putting it. All of that doesn't go together on its own, but given the context of this outfit, it does make a lot of sense.

It Looks Like A High Class Version Of Finding Nemo

In all honesty, that's a pretty valid description.

It Was Giving Off Costume Vibes

That would be a very high quality product by Party City standards.

She Could Rock That In A Beauty Pageant

All she needs is a crown and a sash to complete the ensemble.

It Is Perfect For The Stage... The Broadway Stage

This dress is definitely made of Broadway material (pun intended).

Some people loved the dress. Others loved making fun of the dress. Either way, Tracee Ellis Ross wins the night because she had the most talked about outfit at the AMAs.