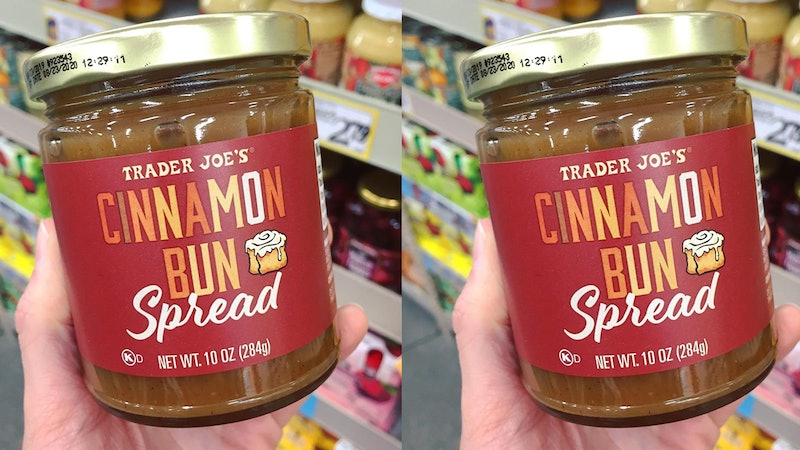 We may still technically be in the dregs of summer, but our grocery stores and food chains are trying to will autumn into existence. First, it was the return of the Starbucks Pumpkin Spice Latte. Then, it was the arrival of Bailey’s Pumpkin Spice liqueur. Now, Trader Joe's has Cinnamon Bun Spread, a spreadable homage to a grossly underrated autumnal flavor. The food world doesn’t care about calendars. Fall is whenever our stomachs say it is.

The Cinnamon Bun Spread initially gained popularity after popular Trader Joe’s foodie account @TraderJoesList shared a picture of the spread on Instagram. The photo, originally taken by Markie Bitter of @thesnacksoflife (a perfect and incomparable Instagram handle), was met with tens of thousands of likes, perhaps from people hoping that touching a picture of the jar would make one magically appear in front of them.

Per an Instagram post from @TraderJoesNut—yes, the spread has been shared on multiple Instagram foodie accounts. We love an Instagram famous jar!!! — a 10-ounce jar is selling for $3.49, at some Trader Joe’s locations. The product label describes the spread as “a rich gooey honey butter base spread with cinnamon bun spices.” It includes flavors like honey, brown sugar, cinnamon, and vanilla. While not listed, one can assume “the whimsy of fall” is also an ingredient.

Instagram foodie account @traderjoesnut says if you’re having trouble finding it at your local Trader Joe’s, try looking on an end cap or by the honey and syrup.

The internet has plenty of ideas about what to do with this magical, cinnamony spread. Some people have put it over waffles. Others, in oatmeal. A few have even mixed it in with yogurt. What I am quickly learning is that Cinnamon Bun Spread is perfect for every and all occasions. It is a breakfast food, a dessert topping, a snack for the afternoon. You can Cinnamon Bun Spread however you want. Who’s going to stop you? The Cinnamon Bun police??? (If you’re a Cinnamon Bun cop, you have to tell me.)

If all else fails, just get a spoon, put the spoon in the jar, and voila! You've got a dessert!

Last year, Trader Joe’s sold Brown Sugar & Cinnamon Cream Cheese Spread which, according to their post on the product, brings a “flavorful one-two punch of delightful baking spice and smooth cream cheese to any surface upon which you choose to spread it.” They recommended included it in a cinnamon-infused cheesecake dip, using as the base for a cream cheese frosting, or swirling into the Trader Joe’s Truffle Brownie Mix.

If you weren’t able to get your hands on the autumnal cream cheese, perhaps this new Cinnamon Bun Spread will hit the spot.

More like this
Learning To Love, Not Judge, The Lunchbox Wives Of TikTok
By Esther Zuckerman
11 Super Bowl Instagram Captions To Use On Game Day — Even If You Don’t Like Sports
By Alexis Morillo
Forestcore Is About To Take Over Your TikTok FYP
By Sam Ramsden
Here’s What TikTok's "Mascara” Trend Is *Really* About
By El Hunt
Get Even More From Bustle — Sign Up For The Newsletter
From hair trends to relationship advice, our daily newsletter has everything you need to sound like a person who’s on TikTok, even if you aren’t.