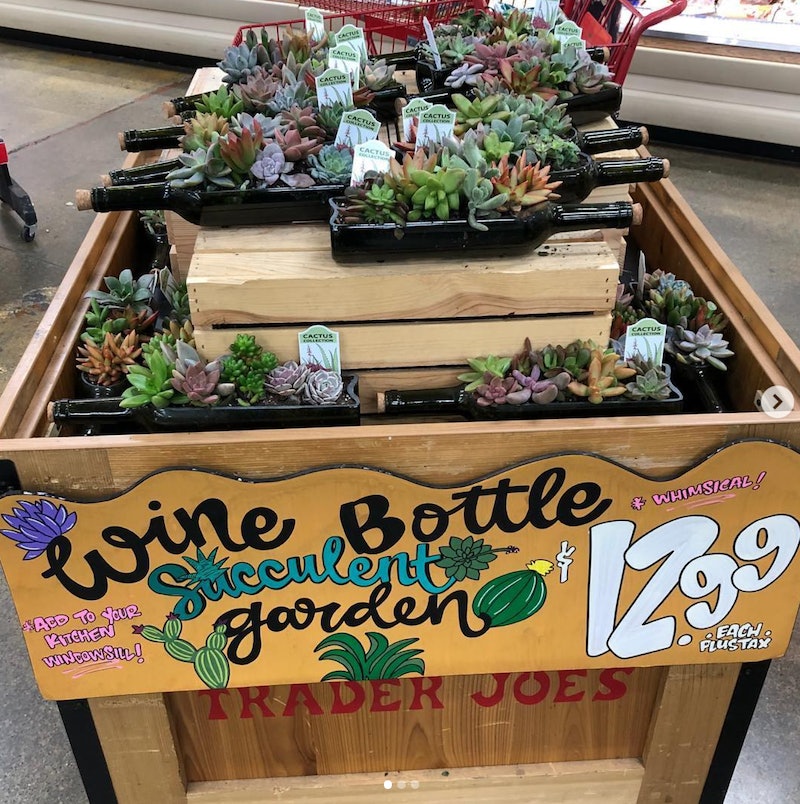 The winter holiday season may be mostly over, but that doesn’t meant the gift-giving has to stop — and, uh, folks? I did you the favor of finding you the greatest gift for a very specific kind of person so you don’t have to: According to PopSugar, some Trader Joe’s stores have wine bottle succulent gardens now, and they are adorable. Sure, your wine-loving friend with the fantastically green thumb may have many things — but do they have a succulent garden made out of a recycled wine bottle? I mean, yeah, maybe they do already… but maybe they don’t. Maybe they need one of these babies in their lives. Heck, maybe you need one of them in your life. I know I sure do — and even though I am a champion at killing hard-to-kill plants, I feel like maybe I might be able to keep this thing alive by sheer force of willpower.

OK, willpower and research. Siri, how do you not kill a succulent?

Info on these little succulent bottles is scarce, but they’ve popped up on a few Trader Joe’s-focused Instagram accounts in recent days, so what we know, we know from there. For example, we know that they’ve been spotted under a few different names: “Wine bottle succulent garden” is, in fact, one of them, but “Succulent in a glass bottle” has also been seen — as has “Drunken cactus party,” which gets my vote for Best Product Name in the wine bottle-as-planter category. Regardless as to the differences in titles, though, they’ve all been priced at a very reasonable $12.99. No word on whether the bottles used to hold Two Buck Chuck or not, though.

It’s unfortunately not yet clear whether all Trader Joe’s locations have them, or whether they’re regionally specific. For what it’s worth, though, they do at least seem to be available in parts of California — namely Southern California — and areas of Nevada: Instagrammer Trade Joe’s List found them in Santa Monica; for Trader Joe’s Haul, they were in “a pretty big ‘wine country’ in CA” (which, granted, could mean a lot of things spread out across the entire state, not just SoCal) ; and Trader Joe’s Life spotted them on a trip to Las Vegas. So, hey, if you’re based in or otherwise currently located around any of those spots, good news! You’ve probably got a slightly higher chance of finding TJ’s wine bottle succulent gardens than the rest of us.

However! There’s also good news for those of us who fail to locate these delightful little windowsill gardens in our friendly neighborhood Trader Joe stores: TJ’s is far from the first person or other entity to think, “Gee, wouldn’t these leftover wine bottles make absolutely adorable planters for all those succulents I have piling up around the house?” DIY tutorials for a variety of similar projects have been making the rounds on the internet for years. Some of them turn the bottles on their sides, just like Trader Joe’s take on the garden accessory does; others keep them upright; and still others make them into hanging planters.

These projects do all require melting glass and modifying glass, though, so if you’re not prepared to do that (safety first!), then you’re better off getting a planter already made. This one from Looking Sharp Cactus should fit the bill; it’s $18.84 or $21.84, depending on whether you opt to keep the bottle’s label on or have it removed. Looking Sharp Cactus’ Etsy shop also has planters that come with the succulents and soil for a bit more; these kits range from $35.98 to $38.98. Lots of other Etsy sellers make and peddle similar planters and kits, too, so no matter where you live or what you plant-keeping skill level is, someone will probably have you covered.

Anyway, all of this is to say that A) wine bottle succulent gardens are a thing, B) your local Trader Joe’s might have them (or not), and C) if it does not, there are other ways to get one for yourself.

Happy new year, folks. May it be full of all the new beginnings you’ve ever hoped for, as represented by tiny desert plants growing in a bottle that once held fermented grape juice. Renewal is a wonderful thing.