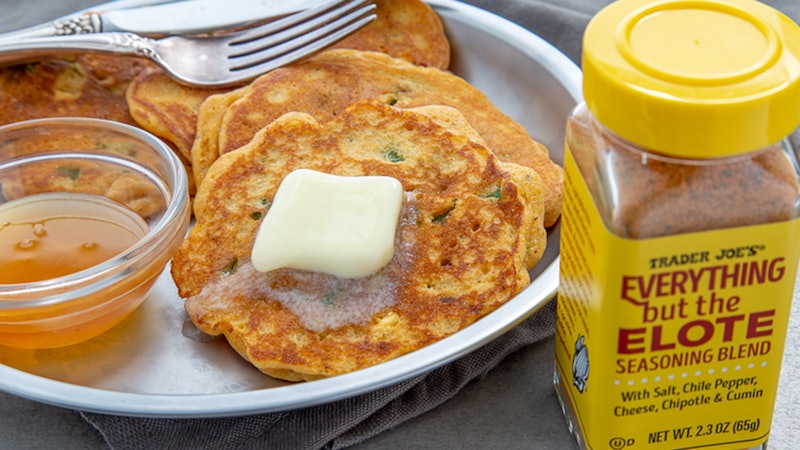 Get ready to make room in your heart, stomach, and pantry for your newest Trader Joe’s obsession. Trader Joe’s new Everything But The Elote Seasoning is officially here to claim its spot as your new favorite. *screams in street corn*

The elote-inspired seasoning blend mixes all the best parts of elotes—which is every part of elotes—minus the corn. It combines chile pepper, Parmesan cheese, chipotle powder, cumin, dried cilantro, and sea salt, as well as some corn flour and cane sugar. It’s basically an elote in powdered form.

You can put it on your popcorn. You can season your veggies with it. You can and should add it to some mayo and bathe your tortilla chips in it. If you need more inspiration, Trader Joe’s has a bunch of elote seasoning recipes that suit the seasoning perfectly. You could also just eat it with a spoon in honor/spite of the elote gods. To each their own elote.

You’ll be able to find Trader Joe’s Everything But the Elote Seasoning Blend in the spice section for $2.49 per 2.3-ounce jar. That is, of course, if it isn’t already sold out. If the rampant love for TJ’s favorites like Everything But The Bagel Seasoning is any indication, this spice mix is going to go fast.

This isn’t the first elote-inspired product Trader Joe’s has released. They’ve got Elote Corn Chip Dippers, which are essentially corn chips dusted with Everything But The Elote Seasoning, in the snack aisle. They’ve also got Mexican-style roasted corn with cotija cheese in the freezer aisle, a frozen-dinner equivalent to the street corn. Now, with the new elote seasoning, you’ll be able to be your own at-home elotero, making every meal and elote-centric one.

The new Everything But The Elote Seasoning joins the ranks of such classic TJ’s spice mixes as Everything But The Bagel Seasoning and their Multipurpose Umami Seasoning Blend, which is made primarily from mushrooms meant to mimic the savory flavor that MSG is typically known for but with a mushroom, onion, and pepper-y base. In early 2020, Trader Joe’s also released Nori Komi Furikake Seasoning, a Japanese multipurpose seasoning that combines dried nori seaweed, black sesame seeds, white sesame seeds, salt, and kelp powder. It's perfect in poke bowls, fish, rice, or tofu fries. It is the seafood equivalent to its everything bagel seasoning counterpart. In other words, it's perfect.

If the new Everything But The Elote Seasoning is anything like its spice mix predecessors, you’ll need to get yours while it’s still in stock. Or hope you can find someone reselling it online. A blessed elote to all and to all a good street corn.