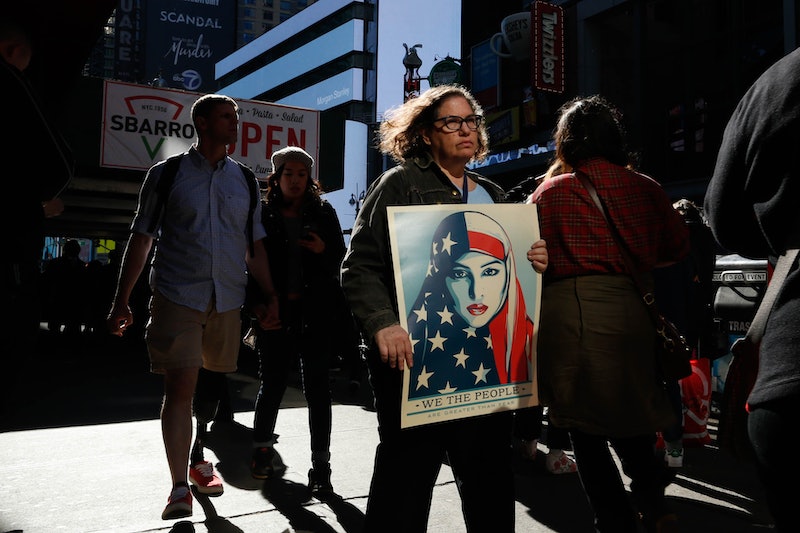 On Wednesday, a federal judge in Hawaii blocked President Trump's revised travel ban, delivering the second courtroom blow to the president's prized immigration policy. The ruling came just in the nick of time, as immigration officials were set to implement the ban at midnight. At great length, the transcript of the Hawaii court's ruling on Trump's ban shows why the temporary restraining order was granted.

Last week, Hawaii became the first state to officially challenge Trump's revised ban, which was set to prohibit travelers, immigrants, and refugees from six predominantly Muslim countries from entering the United States. As challenged in court on Wednesday, the ban was different than Trump's first such executive order. The first iteration was scrapped after it, too, was blocked by a federal district court.

For the second go-around, the president had apparently tried to limit the scope of the ban. He removed Iraq from the list of countries whose people weren't allowed into the United States. The new ban also exempted visa holders, dual citizens, and others who had already in some way been granted entry into the United States. The changes clearly weren't significant enough to pass muster, though, because Hawaii's U.S. District Judge Derrick Watson called the government's argument "fundamentally flawed."

The illogic of the Government’s contentions is palpable. The notion that one can demonstrate animus toward any group of people only by targeting all of them at once is fundamentally flawed.

Hawaii's lawyers argued, in part, that Trump's travel ban violated the First Amendment's Establishment Clause, which prohibits the government from implementing a law that would infringe on the free exercise of any religion. The court found this argument to have merit, ruling that "a reasonable, objective observer... would conclude that the Executive Order was issued with a purpose to disfavor a particular religion."

In the ruling, the court noted that the six countries expressly listed in Trump's executive order "have overwhelmingly Muslim populations that range from 90.7 percent to 99.8 percent."

It would therefore be no paradigmatic leap to conclude that targeting these countries likewise targets Islam.

While the Trump administration's lawyers reportedly argued that the text of the executive order was not discriminatory, the court took other factors into consideration. For instance, Judge Watson's ruling cited the press release that then-candidate Trump's campaign sent out back in December 2015, which called for "a total and complete shutdown of Muslims entering the United States," and the judge concluded:

There is nothing "veiled" about this press release.

In the end, the court's ruling was just as straightforward as it claimed the Trump campaign's press release to be. The decision strongly declared that enforcement of Trump's travel ban "is prohibited, pending further orders from this court." If Trump's previous statements about Muslim immigration are fair game to be taken into consideration, it seems difficult to imagine a scenario in which the travel ban is reinstated.