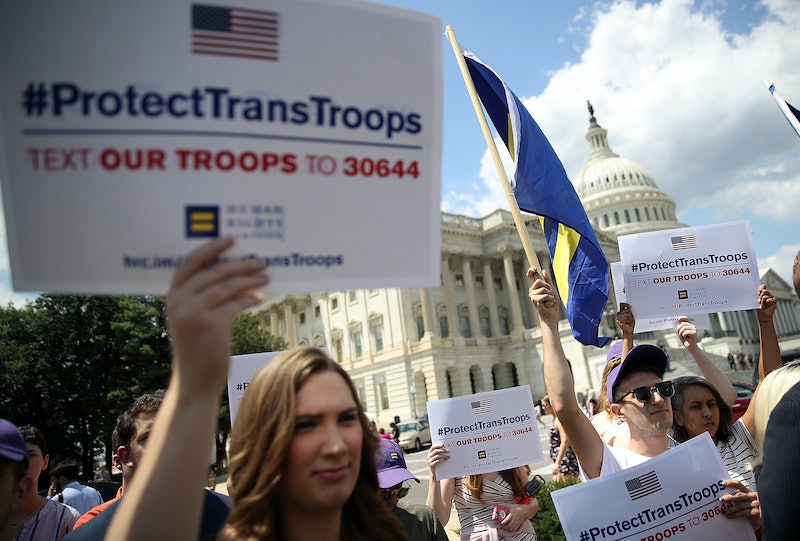 President Donald Trump tweeted on Wednesday morning that the United States would no longer "accept or allow" transgender people to serve "in any capacity" in the military. In the surprise series of tweets, Trump reversed an Obama administration Department of Defense policy that lifted the ban last year on transgender people serving openly. Of course, trans people have long served in the military, though the Obama-era policy formally accepted them. Now, some transgender people fear that Trump's announcement could push trans service people back into the shadows.

"Right now, all over the world, there are transgender service members that are actively defending the Constitution of the United States," Carla Lewis, a Former Airman and transgender activist, tells Bustle. "All the while, they are wondering when their country is going to stand up for them and recognize their selfless service."

Though the president vowed to protect LGBTQ Americans during his campaign, Trump's announcement banning transgender people from serving openly comes weeks after he failed to recognize June as LGBTQ pride month, and months after his administration rescinded a guidance that transgender youth be able to use the facilities that match their gender identity. "I wasn’t surprised. I’m never surprised," Shane Ortega, a retired Army flight engineer and trans activist, tells Bustle. "I wasn’t necessarily the most upset for military service members. I’m most upset for what that means for American civilians."

Gay, lesbian and bisexual people have had been able to serve openly in the military since 2010, when President Obama signed into law the repeal of 'Don't Ask, Don't Tell,' a 17 year-long policy that prohibited queer people from serving openly. When President Bill Clinton announced the policy in 1993, it was theoretically intended to end the witch hunts that gay, lesbian and bisexual people historically faced when serving.

"'Don't Ask, Don't Tell' became terrible and very bad, as bad as what had gone on before," Lillian Faderman, a scholar of lesbian and LGBT history and author of The Gay Revolution, tells Bustle. "Things continued to be bad for gays and lesbians in the military. You didn’t have to tell — someone could tell on you and that would be enough to get you booted."

Valerie Brooks served in the Navy from 1999 to 2003 when the policy was in effect. Though she wasn't out at the time as a trans woman, she still "faced a lot of backlash for being different." "I kept quiet, but I knew I was different. Others did too. There was bullying based on that and the leadership overlooked it from time to time," Brooks tells Bustle.

When the policy was repealed under the Obama administration, "the big discussion at that time was not about transgender people, but about lesbians and gays... The policy became to permit transgender people to serve as long as they could do a good job," Faderman says.

"We've been serving side by side with everyone in the military. We've been next to you side by side. Transgender people are here every day, you meet them, you talk to them, you work with them, you fight with them."

In June of 2016, Obama's Defense Secretary Ashton Carter announced that transgender people, too, would be allowed to serve as their authentic selves. At that time, the Defense Department allotted a year to phase in transgender service people. Then, when the one-year mark rolled around this summer, Trump's Defense Secretary Jim Mattis extended it by an additional six months.

Though transgender issues have become more mainstream in recent years, the truth is there have always been people of every gender identify fighting for the US. "We've been serving in the US military since the beginning of time," Kristin Beck, a retired Navy Seal and the subject of the documentary Lady Valor tells Bustle. "We've been serving side by side with everyone in the military. We've been next to you side by side. Transgender people are here every day, you meet them, you talk to them, you work with them, you fight with them."

"Transgender folks in the military are not a hassle, we are not difficult, or an inconvenience. It simply takes the openness and willingness to expand and learn about us."

When Air Force veteran Liam Waller came out while he was serving in 2013 — before the ban was lifted — he had to rely on his commander, the medical team and on-base legal defense to agree that "as long as I handled [and] paid for my own care and continued to preform my duties professionally, no administrative action would be taken against my service," he tells Bustle. When the ban was lifted, Waller was able to update his documents to change his gender marker from female to male in the military personnel system.

"Things could be challenging from time to time, but I was fortunate to have good leadership in my command who took the time to listen and communicate with me. Transgender folks in the military are not a hassle, we are not difficult, or an inconvenience. It simply takes the openness and willingness to expand and learn about us," Waller says.

In the announcement Wednesday, Trump cited the medical costs and "disruption" of the military as his reasons for reinstating the ban. Of the 1.3 million people serving on Active Duty, an estimated 2,450 are transgender, while another estimated 1,510 transgender people are in the Selected Reserve, according to a 2016 report by the Rand Corporation. The report found that health care costs for trans personnel would increase between $2.4 million and $8.4 million annually — just a 0.04-0.13 percent increase in Active Duty health care expenditures.

"When you start talking about money, whoever he had looking into the numbers is incorrect," says Beck. "If they are taking a bunch of numbers from folks like Caitlyn Jenner, how much do you think Caitlyn Jenner would cost the military? She spent millions of dollars on transition. I've spent zero. I've had zero surgeries. So if all you're doing is taking a whole bunch of Caitlyn Jenner numbers, then you have only one side of the story, of course it's going to be 'oh each person is two million' and never consider the people like me," she says.

When it comes to the cost of supporting troops, the U.S. military spends hundreds of thousands of dollars to train a single soldier, according to reporting by CNN. If transgender troops who've already been trained are forced out, they could be costly to replace. "Soldiers that are close to retirement that came out because of the promise of open service stand to lose all they've invested. New soldiers will have to be recruited and trained at a phenomenal expense and they still won't have the experience of the transgender soldiers being involuntarily separated," Lewis tells Bustle.

"It was thought that transgender people suffered from mental illness and if discovered, a transgender service member could be blackmailed into giving up government secrets."

According to Rand's research, the notion that transgender troops could disrupt the military does not hold water, either. Similar policy changes, such as allowing lesbian, gay and bisexual people to serve openly and opening up combat roles to women, were found to have "no significant effect on unit cohesion, operational effectiveness, or readiness," the report says. "Transgender soldiers have been serving openly since July 2016 and there have been no reported effects on military readiness. This is purely a disgusting political move," Lewis tells Bustle.

While it's unclear how the ban could be implemented, in the past transgender people have been discharged due to their gender identity. In 1991, Lewis was discharged when her unit found out she was trans during a background investigation for a security clearance. "It was thought that transgender people suffered from mental illness and if discovered, a transgender service member could be blackmailed into giving up government secrets," she tells Bustle.

If the military were to discharge transgender people who are serving openly, the kind of discharge they receive would also be consequential. Ortega says he fears that trans people could be punished with a bad conduct discharge, which would impact their ability to access their benefits and make it difficult to get a job in the future. It'd be the "equivalent of being a convicted felon," he tells Bustle.

With Trump's announcement, some fear that the social climate could return to the time that Lewis describes. Or, that at the very least, trans troops could face discrimination for their gender identity. "This announcement undermines, and discredits the sacrifice, dedication and service they have given to this country," Waller says.

"The military cannot be successful unless it accepts all Americans, of all backgrounds," Brooks says.