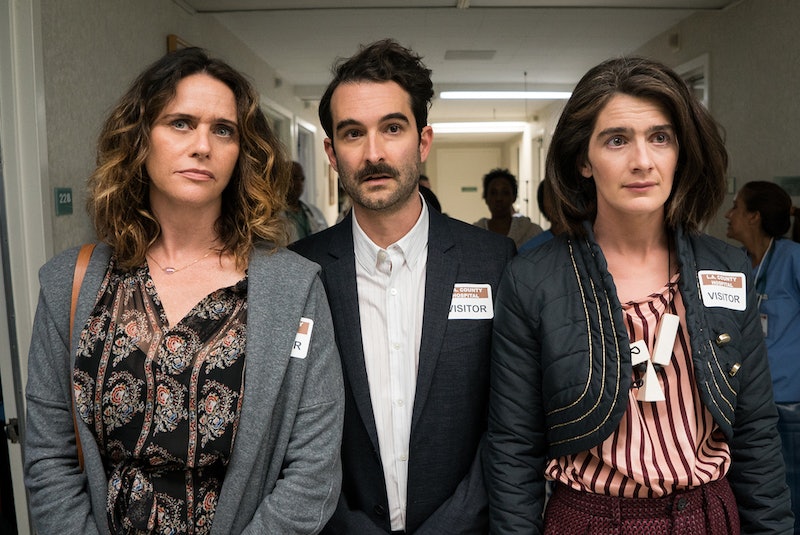 The latest season of Amazon's Transparent only aired last fall, but already, fans are hungry for more. The acclaimed drama ended Season 3 with plenty of drama, with Shelly dumping Buzz, Maura learning she can't have gender confirmation surgery, and Josh mourning Rita, among other events, so the new episodes are bound to be packed with action. And according to these Transparent Season 4 spoilers from stars Jay Duplass and Amy Landecker, things certainly aren't slowing down; the next episodes, they say, are likely going to be just as emotional and eventful as those from Season 3.

"I know it’s gonna be beautiful, but I also know that I’m going to go through a lot," says Duplass, speaking of his character while on the Sundance Film Festival red carpet for his new film Beatriz at Dinner. "As much as we all love the show, we’re in this moment where we’re going to shoot in a couple of weeks, and we’re all bracing for impact. Terrible things are going to happen to us emotionally, and we’re going to do terrible things to other people, too."

More drama for the already-pained Josh Pfefferman? Say it isn't so. At least Duplass will have his TV family to lean on if things get hard. "Transparent is like my second family," he says with a big smile. "Amy and Gaby [Hoffman] are my sisters in the show, and they are my sisters in real life. I text them all the time and get on the phone with them when I have a crisis. Jill [Soloway, the showrunner] has weirdly recreated a whole other family parallel to my actual own family."

In the hands of the brilliant Soloway and the hugely talented cast, Transparent Season 4 is bound to be must-see TV, even if it's often painful to watch. And according to Landecker, who plays Josh's sister Sarah, the new episodes will shake things up not just for her on-screen brother, but for her character, too.

"I will say Rob Huebel is back this year with us in a big way, so I think that bodes well for me and Rob in some sort of fun storyline," Landecker says, speaking about the actor who plays Sarah's ex-husband on the Beatriz red carpet. A Sarah-Len reunion certainly seems possible, considering that Season 3 saw the duo as true friends and allies, despite their divorce, but Landecker's lips are sealed about if a revived romance is in store for the characters.

She does reveal, however, that Transparent's next season could potentially feature a location change, at least for some characters. "I know that the writers went to Israel," she says. "I can’t say why, but maybe there’s something that’s going to be happening there." Adds Duplass, "That’s all I know. I’ve only heard the words Israel."

Could a Pfefferman family trip be on the horizon? Fans can only hope, because the lovably dysfunctional family traveling overseas to their motherland together is a scenario bound to bring some truly amazing drama.