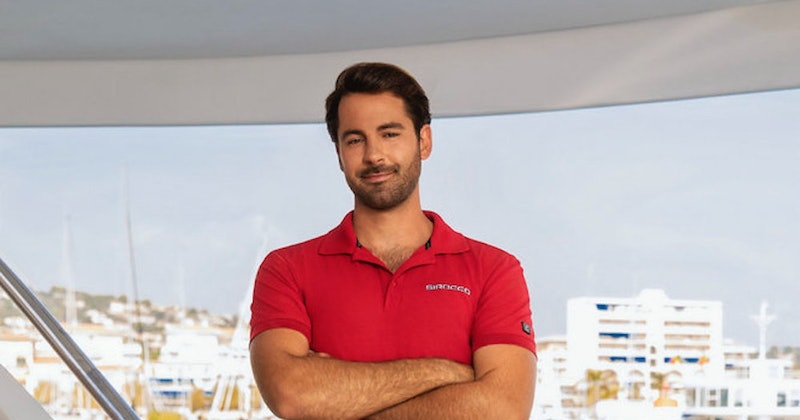 Early on in Below Deck Mediterranean Season 4 it seemed like a romance was brewing between Travis Michalzik and Hannah Ferrier. But their flirtion-ship seemed to fizzle out before it even got going mid-season when Travis kept passing out at dinners. Although he did exchange contact information with a charter guest during episode 14, the aftermath of that didn't play out on the show. Which means that it's very possible that Travis Michalzik is single after Below Deck Med Season 4.

It's possible, but his current relationship status is pretty unclear from his social media accounts. There are no signs of a love interest on his Instagram page, but there are also no definitive indications — whatever those may be — that he is single either. This guy is infamously hard to read, although Travis did open up about his Season 4 attempts at romance on Bravo's Below Deck Mediterranean After Show.

Remember: during the July 29 episode of Below Deck Med, Travis and Hannah planned to go on a double date with Aesha Scott and Jack Stirrup. But Hannah bailed when she saw Travis day drinking before their date. Travis denied that he was drunk that day, saying during his Aug. 2 After Show appearance, that he was "super coherent." He explained, "To be honest, I think that Hannah probably just wanted to get out of it, and she saw a f*cking opening. And she went, ‘Yeah, cool, Trav is pissed. I’m gonna use that as an excuse.'" So it doesn't sound like they've rekindled any romance since getting to port.

While Hannah and Travis did not appear to reconnect romantically from that point on in the season, charter guest Natalie did catch his eye during the Aug. 26 episode. After some particularly flirty interactions, she gave Travis her contact information. In return, Travis slyly slipped her a note as she and her friends disembarked from the boat on the Sept. 2 episode. Travis dished on his decision to pass the note, while Captain Sandy Yawn was standing right there, during the Sept. 9 episode of the Below Deck Mediterranean After Show. He said, "You've got to risk it to get the biscuit."

Unfortunately, that tactic didn't quite work out mainly because Travis was unimpressed with her Instagram game. Travis said that she added him on Insta a few weeks later, but that she wrote "like really sh*tty, just short comments." The deckhand added, "I love me some punctuation... Give me four lines with some punctuation. Send me some poetry. That'd be nice. Something funny."

Since he is open to receiving DMs, that does strongly imply that Travis is single these days. In July, he emphasized his openness to direct messages when he joked about becoming a social media influencer in one of his Instagram captions. He wrote, "Hopefully now people will do this super cool fad thing which the kids been talking about 'sliding into the DMs?' Am I worthy? Please and thank you, - your humble servant Travis Michalzik."

Yes, it's possible for people to DM platonically, but how many friends send each other poetry with accurate punctuation? Travis may not have found love on Below Deck Season 4, but he does seem interested in getting to know people on social media now. Hopefully he can at least make it to the date portion next time.