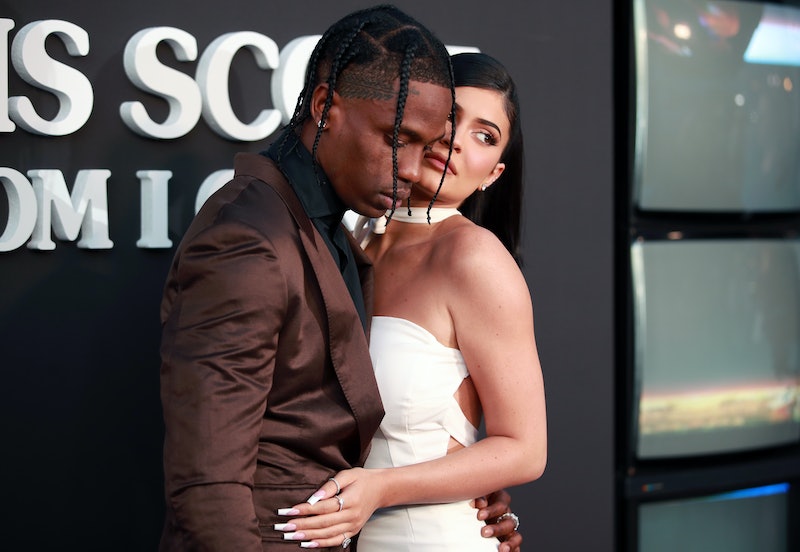 A little over a year after he released his wildly successful album, Astroworld, Travis Scott fans are finally getting new music from the Houston rapper. On Oct. 4, Scott released "Highest in the Room," his first track post-Kylie Jenner split, and the surreal song seems to hint at some underlying tension between the rapper and the mother of his daughter, Stormi.

Scott dropped the single on Friday, along with a trippy video after performing it on tour for some time. "I was just performing it; this is at a point where I’ve done it at so many shows and it’s been so fun doing it. I was like, 'Man, I gotta just drop this,'" Scott told Apple Music Beats 1 DJ Zane Lowe about the track, according to Rolling Stone. "I’m at the point where I’m just trying to cook up some dope sh*t and drop 'Highest in the Room,' and maybe put something around it,'" he continued.

Despite the fact that the song has been on Scott's set list since before his split with Jenner, according to Billboard, it's not surprising that fans might see "Highest In the Room" as dropping some hints about his recent breakup with the reality star. In the first verse, Scott raps that he told his partner, "I’m doin' a show, I'll be back soon (Soon) / That ain't what she wanna hear (Nah)," which could be interpreted as a reference to difficulties in their relationship.

Other lyrics can be interpreted as either about his relationship with drugs or Jenner. "She fill my mind up with ideas," Scott rhymes in the chorus. "I’m the highest in the room / Hope I make it outta here / She saw my eyes she know I’m gone / I see some things that you might fear."

Still, the lyrics to "Highest in the Room" is the closest fans have gotten to any kind of hint as to what lead to this celebrity breakup. Shortly after TMZ broke the news of Scott and Jenner's split on Oct. 1, rumors that the rapper had cheated on the reality star began circulating on Twitter and Instagram.

In response, Rojean Kar — who was reported to be the woman at the center of the cheating rumors — refuted the rumors as a "false narrative," as reported by E! News. "None of these rumors are true, it's just the internet creating a false narrative," Kar wrote on her (now private) Instagram Story, according to the report. "Please stop spreading lies & leave him, her & I alone because it's affecting real lives. Thank you." (Bustle has also reached out to a representative for Scott for comment on the allegations, but has not heard back.)

Jenner herself has also explained that there was no drama surrounding her split from Scott, writing on Twitter, "Travis and I are on great terms and our main focus right now is Stormi." She continued, "Our friendship and our daughter is priority."

This isn't the first time that Scott and Jenner have refuted infidelity rumors in the past; in February, TMZ reported that Scott cancelled a concert in Buffalo because Jenner had accused him of cheating. A rep for the rapper denied the rumors to People, and in the months since, the couple have shared how strong their relationship is, and how much they enjoy being parents to one-year-old Stormi.

"We think the same and we have the same goals and passions in life," Jenner told Scott during their September Playboy interview. She continued, "You're my best friend. Through all the ups and downs that every relationship has, we evolve together through them and keep getting stronger."

Scott and Jenner might be taking a "break" from their relationship at the moment, but it's clear from their comments that no matter what happens between them, their love for Stormi and the focus on their careers will carry them through.