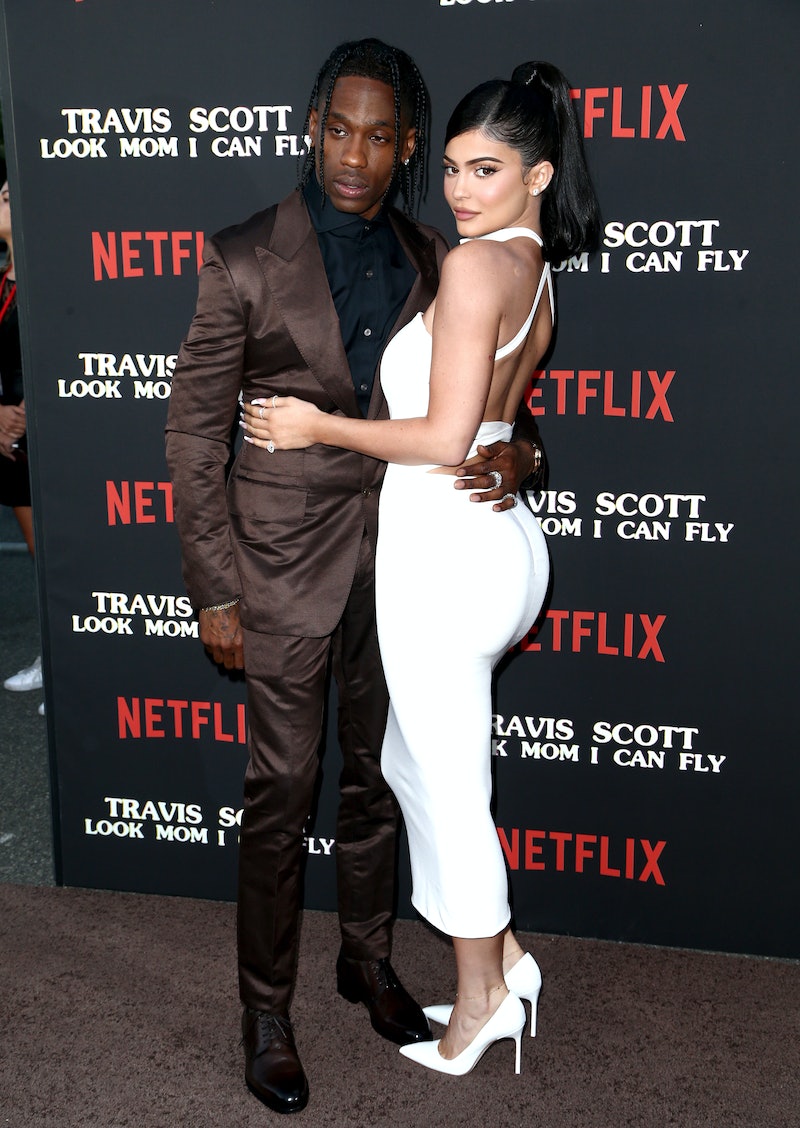 The Kardashians are known for being in the public eye, but that doesn't mean they aren't good at keeping secrets. In fact, a new report of a breakup in the family has taken some fans by surprise. That said, looking at these clues about Kylie Jenner and Travis Scott's reported split, it's clear that not everything is always as it seems. (Bustle reached out to reps for Kylie and Scott for comment, but did not immediately hear back.)

On Oct. 1, it was reported by TMZ that Kylie and Travis are taking a break. Other outlets were also quick to report on the split, including E! News. However, there is a possibility of them getting back together, with a source telling People, "They are taking some time but not done."

The parents to 1-year-old daughter Stormi have faced relationship obstacles in the past like in February when TMZ claimed the rapper canceled a concert because Kylie had accused Travis of cheating. A rep for the rapper denied the claims to People at the time, and since then, the pair had seemed to be going strong. Just in the past few months, they were spotted celebrating Kylie's birthday with a glamorous trip to France in August, and collaborated for Travis' interview of Jenner for Playboy in September. That said, looking back, there may have been a few clues that Travis and Kylie were headed for a split.

Jenner was alongside Scott for the premiere of his Netflix documentary Look Mom I Can Fly on Aug. 27, their last official outing together. The doc follows Scott during the recording of his album ASTROWORLD, and includes scenes about Kylie's pregnancy. Stormi even accompanied her parents to the premiere, and based on the photos, everything appeared to be going great. That said, they haven't been spotted together officially since.

Back in July, Kylie posted a photo with Travis on Instagram, writing in the caption that they were "partners in crime 4 evaaa," and days later, she shared an Instagram album of her and Travis taking baby Stormi on an "adventure." But Travis hasn't appeared on her Instagram since Sept. 10, when Kylie promoted their Playboy article with an official photo from the accompanying shoot. Travis also shared a photo of them from the Playboy shoot on Sept. 14, marking her last appearance on his page.

The fact that Kylie and Travis haven't posted about each other on Instagram in almost a month isn't all that different from their normal patterns. However, one clue that they were on the rocks came when Jenner shared a selfie in her closet on Sept. 17, causing fans to notice the picture of Scott that was usually in her closet was missing. Jenner shut down the speculation, but it seems to take on a new meaning in light of the recent news.

What Did Kylie & Travis Last Say About Each Other Publicly?

Jenner appeared on The Ellen DeGeneres Show on Sept. 10 and casually mentioned Scott throughout the interview, calling Stormi the "perfect mixture" of both of them. In DeGeneres' "Burning Questions" web segment, she even shared what Scott smells like — fresh shower, fresh cologne, and weed.

Their Playboy article, "Wild in Love: Kylie by Travis," was published around the same time (Sept. 13) and didn't indicate a split was on the horizon at all. When Scott asked her why their relationship works, Jenner had a solid answer. "We think the same and we have the same goals and passions in life," she said. " You're my best friend. Through all the ups and downs that every relationship has, we evolve together through them and keep getting stronger." While this doesn't exactly point to a split, perhaps it's a signal that right now, Travis and Kylie are just going through a "down" period, as reports suggest.

TMZ had reported on Sept. 30 that sources said Travis and Kylie were both at Justin Bieber and Hailey Baldwin's long-awaited wedding bash. However, from all photographic evidence, it doesn't look like Travis actually attended with her. He's noticeably absent from all photos from the wedding that Kylie shared to Instagram. Travis is also missing from the family photo Kris Jenner shared of her, boyfriend Corey Gamble, Kylie, and Stormi at the South Carolina wedding. Whether TMZ's source had got it wrong and he was never there, or he was there but not photographed, it still seems like a major clue that a split was imminent.

On the day of Bieber and Baldwin's wedding, Travis revealed he'd be dropping a new single, "Highest in the Room," on Oct. 4. As Billboard noted, Kylie had previously teased Scott's unreleased song in an ad from April for Kybrows by Kylie Cosmetics. In the Kybrows commercial, Scott raps, "She fill my mind up with ideas / I'm the highest in the room / Hope I make it out of here / She saw my eyes she know I'm gone." So, it's unlikely that "Highest in the Room" will have any major clues as to why Travis and Kylie reportedly split. That said, it might give more insight into their relationship.

In fact, maybe Travis' new song isn't a clue about Kylie and Travis' breakup, but about how whether or not they could ever get back together.