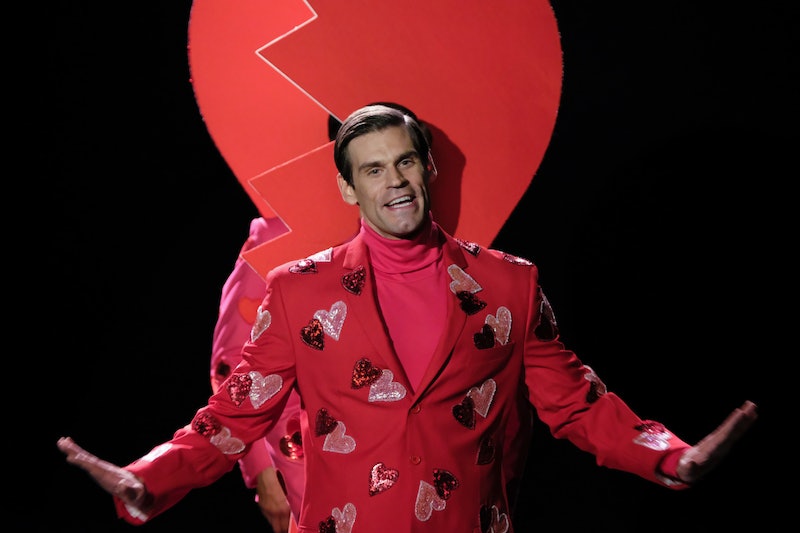 Spoilers for the Feb. 9 episode of Crazy Ex-Girlfriend. If Rebecca Bunch has an archnemesis on Crazy Ex-Girlfriend (executive producer: Aline Brosh McKenna) — aside from herself — it's Trent. Since Season 1, Trent (Paul Welsh) has been the personification of all of Rebecca's Josh-related efforts thrown back at her. The Crazy Ex-Girlfriend episode "Trent?!" flings the long-suffering romantic into the spotlight, and it's creepy. Trent has always been unsettling, but in this latest episodes, he's gone to new lengths to out-Rebecca Bunch the one and only. This character's return proves that the male version of Rebecca Bunch is absolutely horrifying.

Which isn't to say that Rebecca Bunch — at her worst — isn't also scary. She did order a hit on someone, after all. And while these two don't spend much time together, Rebeca and Trent operate on similar wavelengths. When Rebecca was stalking Josh on social media, Trent was putting together a massive conspiracy-style corkboard together and tracking her movements. When Rebecca was holding on to her bear with Josh's face on it, Trent was stealing her underwear and one of each of her pairs of socks. The comparisons run so deep, that the episode even opens with Trent singing a gender-swapped version of the Season 2 opening number "I'm Just A Girl In Love."

When Trent shows up under Rebecca's bed, having broken into her house (similar to how Rebecca broke into Josh and Valencia's apartment in Season 1) he's executing the final part of a plan he's put together. He managed to get proof of that pesky hit that Rebecca took out (and then cancelled) on Nathaniel's girlfriend Mona, and he intends to use it to blackmail her into a relationship. It's a plan that is both not all that different from Rebecca Bunch's most harebrained schemes but is also somehow entirely different. Perhaps it has something to do with the fact that the audience sees Rebecca's actions from her own perspective that she's never seemed as terrifying as Trent.

Even when Rebecca Bunch is on full-on revenge mode, there's never a concern that Josh's, or Greg's, or Nathaniel's life is genuinely in danger. Sure, Rebecca could probably cause a lot of havoc and mess up their lives in significant ways, but not beyond repair. When Trent strolls into Rebecca's office wearing a complimentary sweater, however, one has to imagine what someone would do if they were in Rebecca's situation but lacked her resources. Trent does a lot of things that Rebecca might conceivably do, but is he really that much scarier just because he's a man?

It's hard to say for certain if gender plays a specific role into the Trent/Rebecca dichotomy, but the cultural belief that men are more dangerous and violent than women certainly doesn't play to Trent's favor. And as far as harmful fixations go, men may be more likely to act on them. A 1998 study by the National Institute of Justice found that 78 percent of stalking victims are women, while 87 percent of stalkers are men. A 2014 study by the CDC found that 15.2 percent of women reported being stalked in their lifetimes, compared to only 5.7 percent of men.

Trent's stalking of Rebecca feels more unsettling than Rebecca's actions because it's closer to the statistically consistent narrative of what stalking looks like. While stalking is a "is a gender-neutral crime" as the National Institute of Justice says, the statistics lean closer to the image of Trent controlling Rebecca than of Rebecca manipulating her partners. Perhaps that's why people are raising eyebrows at a new show being developed for CBS by producing partners Seth Rogen and Evan Goldberg that's been called a gender-flipped version of Crazy Ex-Girlfriend's conceit.

Where Rebecca is reckless in how her actions affect others, Trent is very specific in how he uses power over people. Among all the things Rebecca has done for others (that they didn't ask for) she has never once attempted to blackmail someone into being in love with her. Rebecca and Trent both want shortcuts to real love, but only Trent is willing to damage the person he loves into falling for him. In the moments when Rebecca has shown remorse for how she's purposely or inadvertently hurt people in her life, Trent only shows disappointment in not being with Rebecca. Rebecca gets treatment for her borderline personality disorder, but Trent seems to have no interest in going to therapy or even searching for the reason he is obsessed with Rebecca. While gender does play a role in their difference, another factor may be that Trent is what happens when someone like Rebecca doesn't try to improve.

When Rebecca finally gives it to Trent straight — that she will never be in love with him — Trent seems to finally accept that his chances with her are all played out. Of course, reality hasn't stopped Trent in the past. Unless Trent get his own diagnosis and seeks help, he could keep turning up, season after season, always finding new, more disruptive ways to try and get Rebecca to fall in love with him. As Trent's spotlight episode proves, a male character obsessed with someone in the same way that Rebecca Bunch is obsessed with her partners is more alarming than charming.