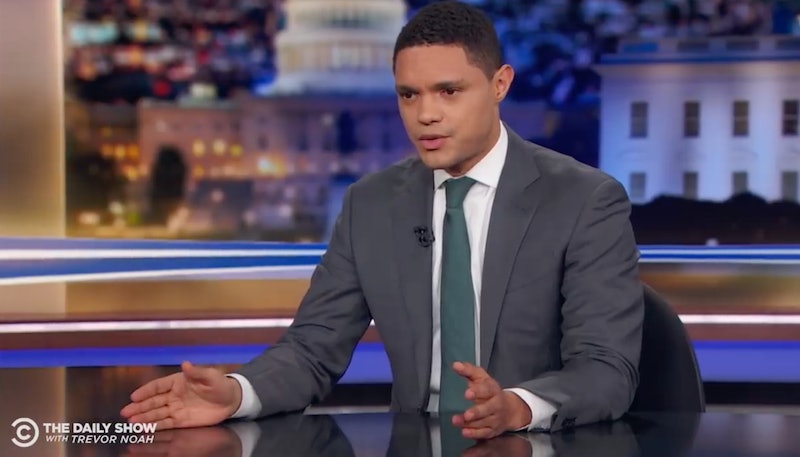 On Tuesday, The Daily Show host spoke seriously about police and the shooting of innocent black men — following the killing of Emantic Bradford Jr. in Hoover, Alabama, on Thanksgiving. Arguing that Bradford was essentially a "good guy with a gun," Trevor Noah said the Second Amendment was "not made for black folks."

In response to a mall shooting, police in Hoover said they shot and killed Bradford. And at first, police claimed they'd killed the shooter. "They ran in, they shot the guy, and then they were like, 'We got him,'" Noah said. Officials later revised the story, first saying that Bradford was not the shooter but had brandished a weapon, and finally that he was just holding one.

"How does this sh*t keep happening?" Noah asked the studio audience. "Cops are called into a situation, they see a black person, and then immediately they shoot."

"If the 'good guy with the gun' happens to be a black 'good guy with the gun,' they don't get any of the benefits," Noah said. He went on to say that many people in the mall pulled out their guns upon hearing the gunshots — but the only one shot by the police was black. He argued this said something about the constitutional right to bear arms:

At this point, you start to realize that really the Second Amendment is not intended for black people. It's an uncomfortable thing to say, but it's the truth. People will be like, "The right to bear arms." Yes, the right to bear arms, if you're not a black man. If you're a black man, you have no business bearing arms at all.

Even if Bradford — an Army veteran whose father is a cop — had been the shooter, Noah took issue with what the police did. "How many times have we seen a shooter who is white and a man get talked down?" Noah asked.

Noah went on to give examples of how police treated white mass shooters. The shooters from the Aurora, Colorado, movie theater and Charleston, South Carolina, black church — both white men — were talked down by police and taken into custody. Noah argued that white shooters who die almost always kill themselves, like in Las Vegas.

"When it's a black guy, they go like, 'Black guy, mass shooter, shoot immediately, ask questions later,'" Noah added. Bradford had a permit to carry the gun, an attorney for the family told CNN.

Noah joked that even police officers are going to have to identify themselves to their partners to avoid being shot — especially after a black security guard was gunned down by police.

"It’s going to get to the point where black cops should warn their partners before they go into a crime scene," Noah said. "They should be like, 'Hey, Dave, it’s me. When we get in there, it’s me. Alright? Look at me. It’s me. I’m the guy with the gun.'"

He also joked that the superhero Black Panther would think twice about saving anybody in the United States. "The next Black Panther, they’re going to be like, ‘T’Challa, are you helping America?’ He’ll be like, ‘Uh, I’ve seen what happens on CNN. I think I—Where’s Ant-Man? Maybe he can help them.’" Noah said.

The topic is a serious one. According to The Washington Post, 184 black men have been shot and killed by the police so far in 2018.