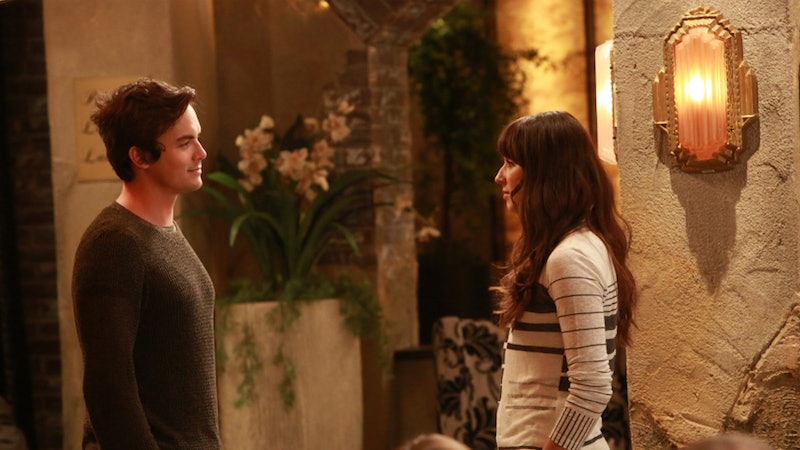 Pretty Little Liars had its fair share of controversial plots over the course of its seven-season run, but perhaps nothing divided the fandom more than when Spencer and Caleb started dating. But while many fans still look back on those episodes with distaste, Troian Bellisario and Tyler Blackburn loved PLL's "Spaleb" plot, which the pair revealed during the cast's recent virtual reunion with creator I. Marlene King.

The group reunited for a cast Q&A to benefit Feeding America on Friday, May 15, and were sharing plenty of behind-the-scenes secrets about the beloved mystery show when the topic of Spencer and Caleb's controversial romance came up. "I feel like it mixed things up," Blackburn said. "It obviously caused a little backlash, but like ... there's no such thing as bad press, you know what I mean?"

While the actor admitted that he was "obviously a Haleb shipper, as they say," Blackburn enjoyed that Caleb's relationship with Spencer offered him new challenges as an actor that weren't there before. "It was awesome to just mix it up," he explained. "I feel like the show also was taking a little bit more of an adult turn then. Troian and I did a lot of like suggested nudity that I had never really done."

Bellisario agreed with Blackburn, explaining that while "a lot of fans got upset about it," the plot was an exciting challenge for her as an actor. "I still feel like some of the scenes that came out of it — like that scene between me, Ashley, and Tyler — I think it's one of my favorite scenes," she explained. "I think it was just wonderful material and it was so exciting to open up those sides of our characters." (Of course, not all of the PLL actors were fans; during the virtual reunion, Ashley Benson admitted that she "hated" seeing Caleb and Spencer together.)

This isn't the first time that Bellisario and Blackburn have shared their affection for "Spaleb" over the years. In January 2016, shortly after PLL fans got their first glimpse at the controversial pairing, Bellisario told Bustle that they actually made sense as a couple. "Spencer and Caleb have always had an incredible relationship," she said at the time. "They’re always the smartest people in the room, so they really respect each other, and they love hanging out. And the thing is, they both have incredible love for each other and for Hanna."

A month later, Blackburn told Vulture that Spencer and Caleb always had a "spark" between them, just under the surface. "I think that Caleb and Spencer have a lot in common. They have an innate sense of what’s going on around them. They’re very inquisitive, they’re very sharp," he said, adding, "Especially after five years, they’re now adults, and they have their specialties, and they work toward them in the same vein."

"In previous seasons, there was a little bit of a spark in certain scenes because of those similarities," he continued. "It’s not as much as fireworks as it was with Caleb and Hanna, but it’s really beautiful." Clearly, whether fans like it or not, that "Spaleb" spark still lives on for Bellisario and Blackburn, all these years later.

More like this
'Friends' Star Maggie Wheeler Offers Support To Matthew Perry After Reading His Memoir
By Alyssa Lapid
Anne Hathaway Shared A "Thrilling" 'Princess Diaries 3' Update
By Darshita Goyal
'RHOSLC' Star Jen Shah Refuses To Do A Post-Sentencing Interview With Andy Cohen
By Brad Witter and Jake Viswanath
'The Queen’s Gambit' Season 2 Tweet Wasn’t From Anya Taylor-Joy
By Mary Kate McGrath, Jack Irvin and Grace Wehniainen
Get Even More From Bustle — Sign Up For The Newsletter
From hair trends to relationship advice, our daily newsletter has everything you need to sound like a person who’s on TikTok, even if you aren’t.