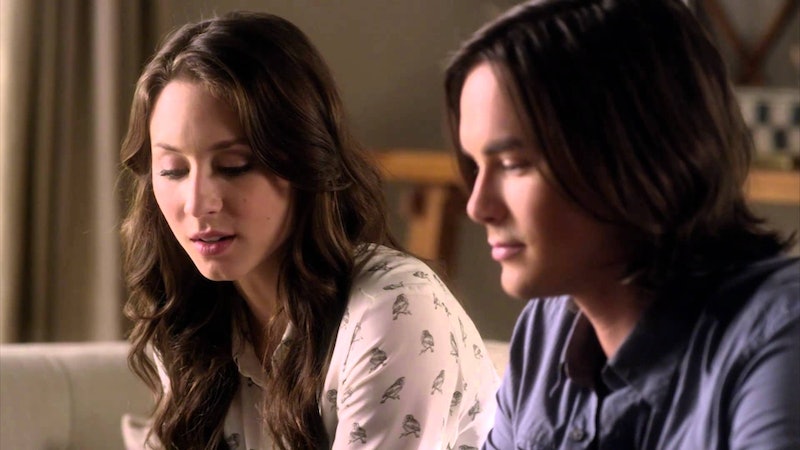 To be a fan of Pretty Little Liars, you need to be understand a few big things: 1) that what you think is going to happen is never actually going to happen, 2) that Tyler Blackburn is a perfect human being, and 3) that when new footage, photos, or information comes out, you're going to have a lot of feelings. Such has been the case throughout the last few months leading up to Pretty Little Liars' 6B premiere on Jan. 12, during which time plenty of tantalizing details about the upcoming episodes were released, yet few answers were made clear. One of the biggest mysteries thus far has been the question of whether, in these new installments, Spencer and Caleb are dating, and understandably, 'shippers of Haleb and Spoby are worried (re: freaking out) that the formerly platonic duo have made things romantic. Well, sorry to make things worse, but according to Spencer herself, Troian Bellisario, the rumors just might be true.

"First of all, they’re consenting adults that have aged five years," Bellisario says when I ask her about the possibility of Spencer and Caleb now being an item. "And while of course you would hate it if one of your best friends got involved in a relationship with whom you loved in high school — that would be a huge betrayal — you don’t know these people after five years. They’re very different. They’ve gone through a lot of different things."

That may not be a definite "yes, they're dating," but read between the lines: "consenting adults," "huge betrayal," "involved in a relationship." Even if Spencer and Caleb aren't officially dating in PLL 6B, it's seeming less and less likely that they're simply the same platonic friends they were in previous seasons. According to Bellisario, though, that might not be such a bad thing.

"The interesting thing for me this season is that Spencer and Caleb have always had an incredible relationship," she says. "They’re always the smartest people in the room, so they really respect each other, and they love hanging out. And the thing is, they both have incredible love for each other and for Hanna."

The actor references Spencer's support of Caleb through his post-Ravenswood drinking days, as well as her advice to Hanna after the dollhouse not to push Caleb away, as examples of the care the trio have for one another. And no matter what happens in 6B, Bellisario says, "The main thing... about the relationship between Spencer and Hanna and Caleb is that the love and the respect that they share goes nowhere. It’s always the same as it has been because these characters, they care about each other to the end of the earth."

Still, she's clearly enjoying the speculation around the dating rumors, laughing at passionate Haleb and Spoby 'shippers' reactions to the fateful new footage. "Fans are taking on this rumor just like, 'they’ve gone off the rails now.' Like, 'I hate it!'" Bellisario jokes. She's careful to keep the possibilities for what exactly that "it" is wide open, though. Says the star, "I’m interested to hear what people think, because I don’t also think that it’ll be the relationship that you guys all think it will be."

Meaning... what? That Spencer and Caleb aren't dating? Or that they are, but Hanna's totally OK with it? Or that the three of them (and maybe even Toby) are together in some strange but ultimately fan-satisfying relationship? (It's PLL. Weirder things have happened.) Whatever the truth is, we'll find out soon enough when Pretty Little Liars finally makes its long-awaited return.

For more Season 6B theories (and talk of Spaleb), check out Bustle's PLL podcast.