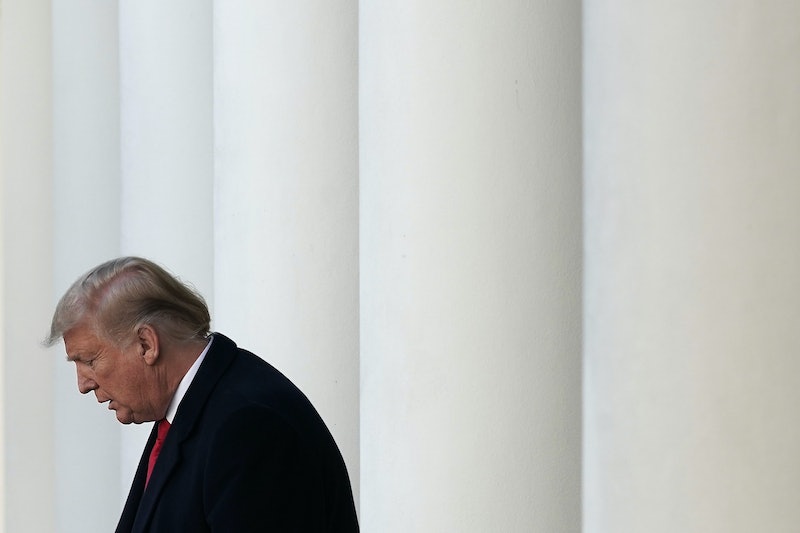 While talking to reporters Thursday, President Trump addressed the Jussie Smollett attack that unfolded two days earlier, calling it "horrible." According to Chicago police, on Tuesday, two unknown assailants accosted the Empire actor on the streets of Chicago, shouted bigoted slurs at him, tied a noose around his neck, and poured an unknown chemical substance on him.

"That, I can tell you, is horrible," Trump said after a reporter described the assault of Smollett, who is black, gay, and Jewish. "I've seen it last night. I think that's horrible. It doesn't get worse, as far as I'm concerned." The president then segued back into discussing U.S. immigration policy.

Smollett's music manager Brandon Z. Moore, who says he was on the phone with him during the attack, told Variety that he heard the attackers shout "this is MAGA country" while they were beating the actor, with "MAGA" being a reference to Trump's "Make America Great Again" slogan. Anthony Guglielmi, chief communications officer for the Chicago Police Department, confirmed to Variety that Smollett told investigators he heard the assailants shout this phrase.

Smollett himself hasn't publicly spoken about the attack. While discussing the issue Thursday, Trump was not asked specifically about the assailants reportedly using his campaign slogan during the assault.

The CPD has released two images, pulled from surveillance footage, of "people of interest" in the attack. However, the pictures are extremely dark and blurry and don't reveal anybody's face, and Guglielmi wrote in a tweet that the surveillance footage in question doesn't capture the assault itself.

ABC News reports that on Jan. 22, the Fox studio that produces Empire received a letter threatening Smollett. The letter contained a powdery substance, which investigators reportedly believe was crushed Tylenol, and according to ABC News, the FBI is now investigating this threat. It's unclear whether the letter is related to the attack on Smollett that unfolded days later.

Terrence Howard, who also stars on Empire, tells ABC News that Fox has offered every actor on the show 24-hour security in light of the letter and attack.

On social media, Smollett received an outpouring of support from fans, politicians, activists and others in the entertainment industry. Danny Strong, Empire's executive producer, wrote that he is "deeply horrified and saddened by the racist and homophobic attacks" against Smollett, whom he called "a kind and profoundly talented soul whom I respect with all my heart." Sen. Kamala Harris called the attack an "attempted modern day lynching," and said that Smollett is "one of the kindest, most gentle human beings I know."

"The horrific attack on Jussie Smollett has no place in a decent human loving society," director Rob Reiner tweeted. "Homophobia existed before Trump, but there is no question that since he has injected his hatred into the American bloodstream, we are less decent,less human,& less loving. No intolerance! No DT!"

Smollett's family released a statement on Thursday, thanking people for their support and drawing attention to the frequency with which hate crimes are committed in America.

"We want people to understand these targeted hate crimes are happening to our sisters, brothers and our gender non-conforming siblings, many who reside within the intersection of multiple identities, on a monthly, weekly, and sometimes even daily basis all across our country," Smollett's family said in a statement to Fox News. "Oftentimes ending fatally, these are inhumane acts of domestic terrorism and they should be treated as such."