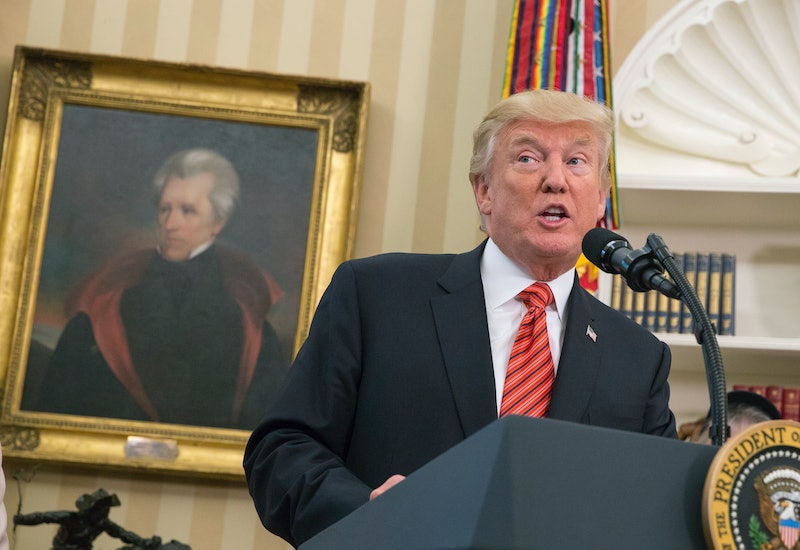 President Trump has often lobbed criticisms at The New York Times, and in a string on Saturday morning, he did so again with little context. The Times, Trump claimed, ruined a plot to kill ISIS leader Abu Bakr al-Baghdadi, calling it the newspaper's "sick agenda over National Security."

Though some were bewildered by the accusation, it quickly came to light that the president tweeted it some 20 minutes after that line was touted on a Fox News program.

"The Failing New York Times foiled U.S. attempt to kill the single most wanted terrorist, Al-Baghdadi. Their sick agenda over National Security," Trump tweeted. While the president didn't go on to contextualize his accusation against the major paper, the Fox and Friends segment that aired early Saturday morning gave more context.

During the segment, Fox News shared comments from a top U.S. general who claimed leaks to the Times may have contributed to al-Baghdadi's escape from U.S. forces. While speaking with Fox News host Catherine Herridge on Friday, Special Operations Command Gen. Tony Thomas shared that forces came close to capturing al-Baghdadi in 2015 — that is, before the media leak.

"That was a very good lead. Unfortunately it was leaked in a prominent national newspaper about a week later and then he went dead. That's a challenge we have in terms of where and how our tactics and procedures are discussed openly," said Thomas.

Thomas was referring to a report published by the Times in June 2015. The article shared information about al-Baghdadi's operations and his attempts to avoid capture by U.S. forces, and quoted several high-ranking American officials, including a statement from an unnamed top senior State Department official, who told the newspaper: "Every single day the picture becomes clearer of what this organization is, how sophisticated it is, how global it is and how networked it is."

While Trump didn't directly allude to Thomas in his tweet, the timing and content would suggest he watched the Fox News segment before posting.

On Saturday morning, Times reporter Peter Baker wrote a response to the president's accusation, sharing that the paper received full permission before publishing. "The Pentagon raised no objections with the Times before publishing the story in 2015 and no senior American official ever complained publicly about it until now," wrote Baker.