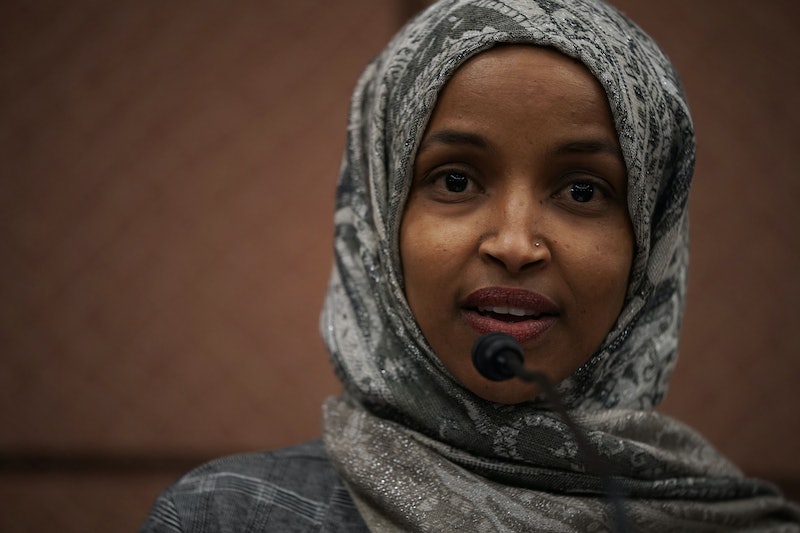 President Trump has called on one of the first Muslim women elected to Congress to resign over a pair of her recent tweets that have been accused of anti-Semitism. On Tuesday, Trump said Rep. Ilhan Omar should resign from Congress or step down from the House Foreign Affairs Committee over her comments about pro-Israeli lobbying groups. Many people, however, contrasted Trump's comments about Omar with his remarks about neo-Nazis at the far-right rally in Charlottesville in 2017.

On Sunday, Omar, a Minnesota Democrat, tweeted a suggestion that political support for Israel in Congress was due to financial influence from pro-Israel lobbying groups like AIPAC. In another tweet, Omar responded to House Minority Leader Kevin McCarthy vowing "action" against her and Democratic Michigan Rep. Rashida Tlaib over their criticism for Israel, writing, "it's all about the Benjamins, baby." The tweet was swiftly denounced for its use of an anti-Semitic trope about Jewish people and money.

By Monday, various people had criticized Omar, including House Speaker Nancy Pelosi and Senate Minority Leader Chuck Schumer. Later that day, Omar apologized in a statement, saying that she was "grateful for Jewish allies and colleagues who are educating me on the painful history of anti-Semitic tropes."

"We have to always be willing to step back and think through criticism, just as I expect people to hear me when others attack me for my identity. This is why I unequivocally apologize," she wrote. "At the same time, I reaffirm the problematic role of lobbyists in our politics, whether it be AIPAC, the NRA or the fossil fuel industry. It's gone on too long and we must be willing to address it."

On Tuesday, Trump called Omar's apology "lame" and said her sentiments about Israel were "deep-seated in her heart." But some Twitter users quickly pointed to Trump's comments during Charlottesville in response.

One of the most inflammatory instances was when Trump criticized "many sides" following the far-right Unite The Right rally, where a counter-protestor was killed and dozens more were injured. Trump's initial response to the deadly violence was: "We condemn in the strongest possible terms this egregious display of hatred, bigotry, and violence on many sides — on many sides."

After both Republicans and Democrats called him out for equivocating white supremacists with anti-racist protesters, the president attempted to backpedal from his remarks. As he read lines from a teleprompter, Trump announced, "Racism is evil. And those who cause violence in its name are criminals and thugs, including the KKK, neo-Nazis, white supremacists and other hate groups that are repugnant to everything we hold dear as Americans."

But it didn't take too long for Trump to return to lampooning the "left." Later on in September 2018, senior journalist Bob Woodward's book about the White House under Trump, titled Fear, claimed that Trump regretted condemning Neo-Nazis after the Charlottesville rally. The White House, however, responded by calling Woodward's book "nothing more than fabricated stories."

Given Trump's own spoken record about white nationalists, who regularly use anti-Semitic rhetoric in their political activities, some social media users made sure to point it out following his comments about Omar.

As for the congresswoman, Omar has vowed to move forward, promising her followers in her statement on Monday that she is "listening and learning, but standing strong."