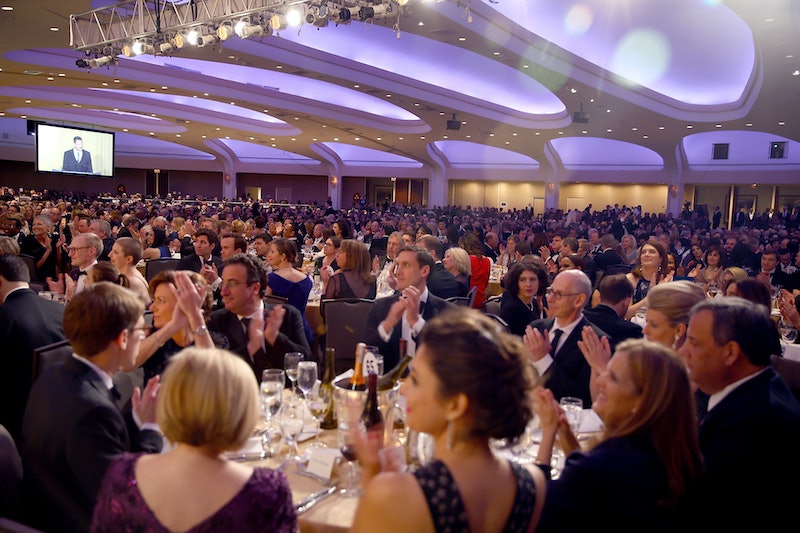 On Tuesday evening, a day after the announcement that historical biographer Ron Chernow would headline the famed event, Trump called the White House Correspondents' Dinner a "dying evening." Since it's making a "comeback," though, POTUS suggested he might attend anyway. It was the latest of many comments Trump has made about the famous dinner over the years, especially in the wake of comedian Michelle Wolf's performance hosting the event last April. If Trump does actually attend the event, it will be the first time he's done so as president.

So-called comedian Michelle Wolf bombed so badly last year at the White House Correspondents’ Dinner that this year, for the first time in decades, they will have an author instead of a comedian. Good first step in comeback of a dying evening and tradition! Maybe I will go?

This is the first time a non-comedian will host the event since the 1980s, per The Washington Post. Wolf's initial response to the decision by the WHCA to choose Chernow was a harsh condemnation: "The @whca are cowards. The media is complicit. And I couldn't be prouder." But her response to Trump was even more cutting. She tweeted, "I bet you'd be on my side if I had killed a journalist. #BeBest"

Wolf made headlines last April for her sharp commentary at the WHCD, from her reference of the "smokey eye" look that Sarah Sanders fashions out of the ashes of the facts she "burns," to her reference of Ivanka Trump being "as helpful to women as an empty box of tampons." At one point, Wolf annihilated Sanders and Ann Coulter in one fell swoop, saying,

And I'm never really sure what to call Sarah Huckabee Sanders...Like, what's Uncle Tom but for white women who disappoint other white women? Oh, I know: Aunt Coulter.

The Trump administration and the WHCA both immediately denounced Wolf's performance. So it's largely unsurprising that the next host for the WHCD would be the safest option possible: Chernow. Unlike Wolf, who is a seasoned comedian, Chernow is knowned for his work as an acclaimed biographer of presidents. Notably, his book, Hamilton, was the inspiration for Lin-Manuel Miranda's creation of the famous Broadway musical.

In his acceptance statement for the honor, Chernow said, "While I have never been mistaken for a stand-up comedian, I promise that my history lesson won't be dry."

Traditionally, the WHCA's dinner has been a night of satire, with a host comedian poking fun at the current administration, and the president often giving some lighthearted remarks as well. At Obama's last WHCA dinner (in the height of the 2016 presidential campaign), he said, "Eight years ago, I said it was time to change the tone of our politics. In hindsight, I clearly should have been more specific.

Obama even notably called out then-presidential candidate Trump for not showing up to the dinner (a trend he has continued into his own presidency). Obama said, "You’ve got a room full of reporters, celebrities, cameras, and he says no? Is this dinner too tacky for The Donald? (Laughter.) What could he possibly be doing instead?"