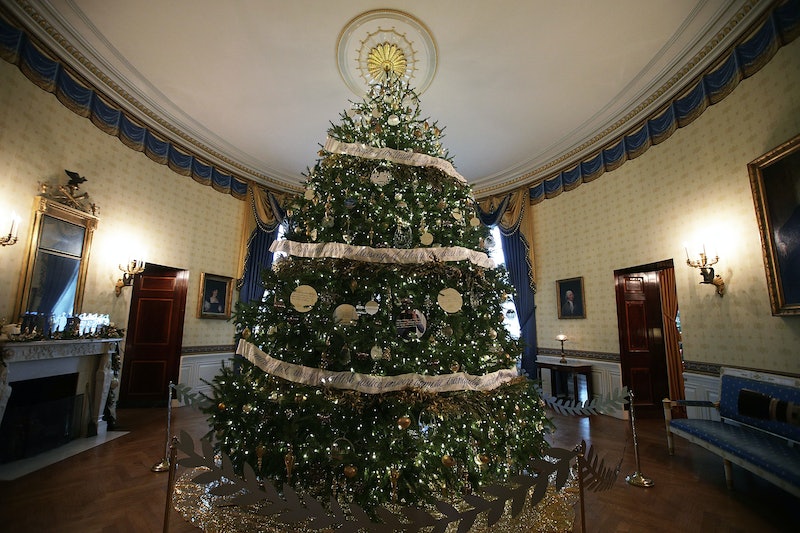 The current White House's relationship with the media has been rocky, to say the least. Now President Donald Trump has cancelled the annual White House holiday party for the press, Fox News reports. No announcement was made — this year's party was just never scheduled.

Trump hosted the press party last year, though he and the first lady broke tradition by not sticking around to pose for photos. It also started at 2 p.m., as The New York Times reports, rather than in the evening. Although Chief of Staff John Kelly (who's now on his way out) did take the time to talk with reporters last year, not all journalists are bummed the party's off.

"Like last year, I wasn't planning on going," tweeted April Ryan, a White House correspondent for American Urban Radio Networks White House Correspondent. "I don't break bread with people who don't like me."

Although the White House hasn't commented on the decision, Fox reports that the president himself chose to cancel the party. And while the cancellation left most journalists without a White House holiday party to attend, "selected media people generally favorable to Trump," including Fox News hosts, were invited to other White House shindigs, according to Fox.

Trump hasn't been a fan of media events in general since taking office in 2017. In April, he tweeted that the "failure" known as the White House Correspondents' Dinner should be put "to rest." He added that "this year was an embarrassment to everyone associated with it," saying the featured comedian, Michelle Wolf, "totally bombed." The president didn't attend the dinner in 2017 or 2018.

Other media organizations stood by CNN when it chose to sue the president for violating Acosta's First and Fifth Amendment rights — including Fox News. "While we don’t condone the growing antagonistic tone by both the President and the press at recent media avails, we do support a free press, access and open exchanges for the American people," Fox News President Jay Wallace said in a statement last month.

Although the canceled holiday party didn't come as a shock, it did signal that the president doesn't plan to try to smooth other his relationship with the media. Where the party would have offered his administration a chance to chat with journalists in a less formal setting than the White House briefing room, eliminating a decades-old tradition only creates silence.