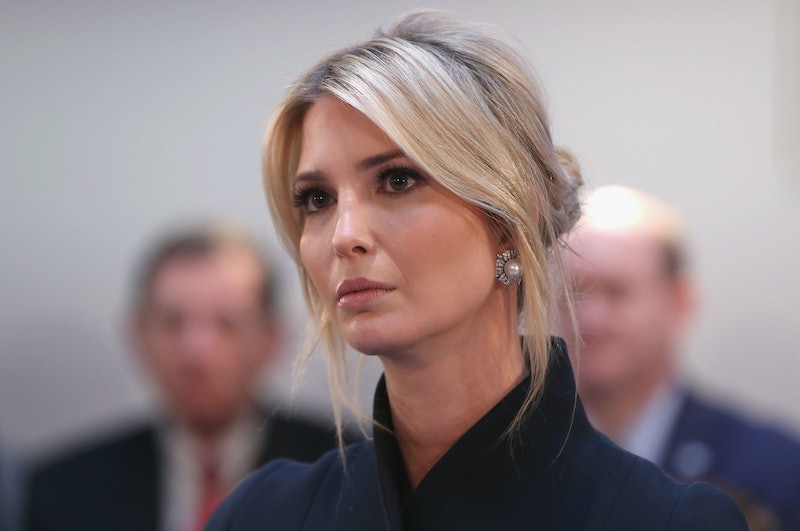 Speaking at a White House business session Monday, President Donald Trump assessed job growth in the United States, giving a nod to his eldest daughter. During the meeting, Trump claimed Ivanka created millions of jobs, but it appears that he may have misconstrued some White House figures in doing so.

A moment later he pointed to the Council for American Worker its associated Pledge to America’s Workers, which Ivanka championed after both initiatives launched last summer. He said that as a result, the administration "gained commitments from private sector leaders to hire and train more than 6.5 million Americans."

"Think of it: 6.5 million," he said. "And these are jobs that, for the most part, would not have happened."

But the Council for American Workers program, as well as the pledge, don't necessarily guarantee jobs, per se. According to the White House, "the Council is charged with developing a National strategy for training and retraining the workers needed across high-demand industries."

While the ultimate goal of the program might be to place trainees into secure, paid positions, that's not what the council explicitly does. In discussing the initiative last summer, Ivanka herself said that the pledge was about promoting what she called "skills development."

"This is about really thinking holistically about skills development, vocational education, apprenticeships, through the arc of one's career," Ivanka told KCRG's Washington bureau chief, Jacqueline Policastro, at the time. "And we're going to take it across the country so it's called the 'Pledge to America's Worker' and we are hoping that companies large and small join with us."

On Monday, Trump did not explain his claim that Ivanka had created millions of jobs, according to reports, as well as a White House transcript of the event. The White House has logged more than 6 million opportunities under the Council's purview, according to its website, but again, those don't necessarily translate into concrete employment.

And some of the opportunities accounted for may have been in the works before the Trump administration initiative even kicked off, according to a CNN report from last fall. The network pointed to the Associated General Contractors as an example. The group had pledged 172,500 over the next five years, but a spokesperson told CNN that he understood the promise to be more of a demonstration of already-existing growth.

"Our understanding was that the intent of the event was to demonstrate what employer and labor groups were doing to train workers in the United States," Brian Turmail, the group's vice president for public affairs, told the network. "It was a way to highlight investments they're already making."

There's no doubt that the Council's opportunity-tracking figures have grown since the program was first launched. But while Ivanka has certainly helped to promote this particular White House initiative, it appears that Trump's claims about her accomplishments were a bit off base.