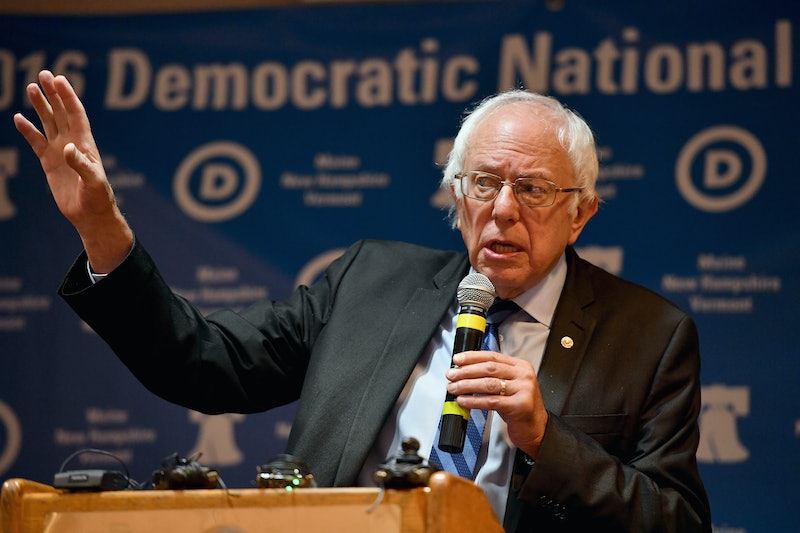 When asked last month by CNN's Dana Bash about the GOP’s failed Obamacare repeal and replacement attempt with the American Health Care Act, Sen. Bernie Sanders said he had a plan of his own. In the interview for State of the Union, the Vermont senator and 2016 presidential hopeful said he was planning to introduce his own healthcare bill that included a "Medicare-for-all" feature. Then, Sanders directly reached out to the man who he called "a fraud" just this past February.

"President Trump, come on board,” Sanders said, “Let's work together."

The concept behind "Medicare for all" is to expand the government healthcare program, Medicare, that's already available to Americans 65 and older to everyone. Sanders also said he would personally reach out to the president about working with him to make his “coverage-for-all” proposal a reality.

But how realistic is it that two men who appear to be political and social polar opposites (except, perhaps, when it comes to free trade agreements) would come together on healthcare reform?

Trump himself has said multiple times that he wants a healthcare plan to cover "everybody." And Sanders’ “Medicare for all” would do just that. There is evidence that nationally, there is potentially an audience to back universal healthcare. A May 2016 Gallup poll found that the majority of Americans (58 percent) "express[ed] considerable support for the idea of replacing the ACA with a federally-run national healthcare system."

Moreover, an increasing number of Republicans want the government to be responsible for providing healthcare to all Americans, according to the Pew Research Center. It found that 32 percent felt healthcare coverage for all was the government's responsibility in a January 2017 survey, compared to 19 percent in March 2016. While still a minority, that's a notable increase in support in just ten months.

So, is it possible that Trump could make Sanders’ healthcare “revolution” a reality?

The problem is that even if one can make the argument that Trump's and Sanders' goal would align in the latter's universal healthcare goal, few experts think the president would actually ever endorse that.

“It is inconceivable to me that President Trump would jump on board ‘Medicare for all,’" Dr. Mark Peterson, chairman of UCLA’s Department of Public Policy, tells Bustle. "What we have observed suggests that President Trump possesses close to no information or knowledge about healthcare, healthcare systems abroad, payment systems, the Affordable Care Act, or the American Health Care Act.”

And it's not just Trump who would be an obstacle to Sanders goal (though he's a big one).

Dr. Jodi Liu, an associate policy researcher at the RAND Corporation whose work focuses on healthcare financing and payment, tells Bustle that the Republican-dominated Congress could be even harder to get on on board with Sanders' proposal for a single-payer plan of having a single public or semi-public agency providing health insurance for everyone (by the way, single-payer is largely synonymous with "Medicare for all").

"The price tag on a traditional single-payer system advocated by Sanders could be a major challenge in gaining support in Congress,” Liu says.

A big reason such a proposal would have trouble passing through a Republican-dominated Congress is that it would likely largely rely on raising taxes. While advocates for a single-payer system say it can be funded by replacing inefficiencies in market-driven healthcare systems, such as insurance companies, the enactment of such a plan would still likely come with a major tradeoff of increasing taxes.

Whether Trump’s campaign promises would translate into support for this plan is anyone’s guess."

For a better grasp of what tax rates might look like under a single-payer system here, consider the stats from Canada last year. According to research from the Fraser Institute, in 2016, "unattached" Canadians (unmarried, childfree) with an average salary of $42,900 a year paid taxes at a 42 percent rate - which means that roughly $18,000 of these individuals' annual salaries last year (again, $42,900) went toward paying into the single-payer system.

The tax rates in Canada do vary depending on the household income and the "child to adult" ratio in any given living arrangement. For example, a single parent in Canada with one child who made roughly $56,000 in 2016 paid a tax rate of around 33 percent. However, in the U.S., a household with these exact same dynamics were taxed at a rate of 25 percent in 2016.

The American Health Care Act, which Trump supported and the House withdrew, is as different from Sanders’ proposal as one could get.'

Liu points to a possible variation on Sanders’ plan that could work for Republicans, which was suggested in a New York Times article by Benjamin Domenech, fittingly called “How Trump Can Fix Health Care." Domenech pointed to how providing universal catastrophic coverage, which would mean that Americans would be charged for medical costs only up to a certain percentage of their income before being capped in terrible or extreme situations.With its “means-tested deductibles, which would cover everybody,” Liu explains, this plan “seems more aligned with conservative principles.”

Still, every expert I spoke to felt the chance that Trump would whole-heartedly embrace Sanders' proposal was slim to none.

"Whether Trump’s campaign promises would translate into support for this plan is anyone’s guess," says Allison Hoffman, a professor of Law at University of California, Los Angeles and expert on health law and policy. "The American Health Care Act, which Trump supported and the House withdrew, is as different from Sanders’ proposal as one could get. It would have resulted in 24 million people losing coverage, which didn’t seem to diminish Trump’s support for it."

Then again, maybe one day, the president will wake up at 4:30 a.m. to tweet that he thinks universal healthcare is a great plan and that Sanders is a real winner.

But I won’t hold my breath.