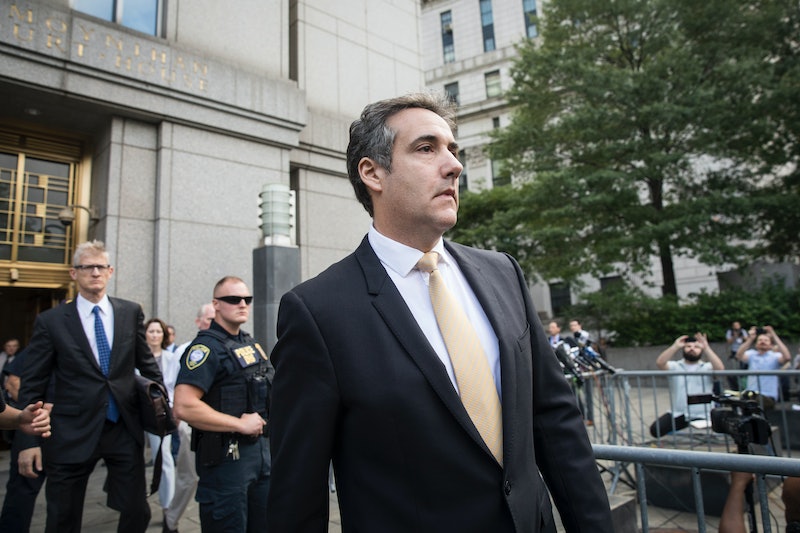 No one is arguing that President Donald Trump had a good day on Tuesday, Aug. 21, when a pair of problematic stories broke in the span of only minutes. Trump's former campaign manager Paul Manafort was convicted on eight counts of bank fraud — but even more dangerously for Trump, his former lawyer and fixer, Michael Cohen, pleaded guilty to multiple crimes, including breaking campaign finance law in his service to Trump. Now, it might seem like there's an easy way out of all of this, since as the president, Trump could pardon Cohen — but no one seems to think that it's a good idea.

On a strictly legal level, Fortune wrote that Trump could absolutely pardon Michael Cohen for the federal crimes that he pleaded guilty to. As Cohen made his plea deal with federal prosecutors in the Southern District of New York, his crimes do technically fall within the realm of the president's pardon power. However, there are many reasons why various experts argue it would be a very bad idea to actually exercise that power.

The first reason is that it wouldn't necessarily even accomplish the goal of taking Cohen out of legal jeopardy. Presidential pardons only apply for federal crimes — and as Vox explained, Cohen's crimes could also be prosecuted in the state of New York. And if that were to happen, a presidential pardon would cease to be an option.

If Trump pardoned Cohen and Cohen was then charged in a state court — or if he made a deal with state prosecutors — that could lead to a whole new realm of legal jeopardy for the president, according to CNN. State prosecutors could immunize Cohen rather than prosecuting him, which would give him free rein to testify without the threat of criminal charges hanging over his head. (The president has repeatedly denied any legal wrongdoing, including collusion and campaign finance violations.)

And at the federal level, as Georgetown law professor Paul Butler told Vox, a pardon from the president would make Cohen immune from prosecution. That would then take away his Fifth Amendment rights, which allow him to remain silent instead of incriminating himself. If he couldn't incriminate himself because of a pardon, then Mueller — or another federal prosecutor — could force him to offer in-depth testimony about the president's actions during the campaign.

Even more potentially dangerous than Cohen being compelled to testify against Trump after receiving a pardon is the fact that many would view a pardon of Cohen as an attempt to obstruct justice. As Citizens for Responsibility and Ethics in Washington explained in a paper on why Trump shouldn't pardon Cohen, taking that action would necessarily raise the question of why the president was choosing to do so. It's altogether possible that enough members of Congress could see a pardon of Cohen as a way for Trump to attempt to hide information that Cohen has from Mueller — or they could simply see it as an open admission from the president that he acted illegally during the campaign, in order to get elected.

Beyond all of this, Cohen's lawyer told NBC's Today Show on Wednesday morning that Cohen wouldn't even take a hypothetical pardon — which would open the president up to all of those questions without even scrubbing Cohen's record.

“Not only is he not hoping for it, he would not accept a pardon," Cohen's lawyer Lanny Davis said on Today. "He considers a pardon from somebody who has acted so corruptly as president to be something he would never accept.”